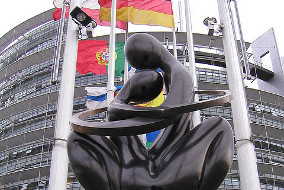 Welfare as a core value: Sculpture ʺEurope has a heartʺ in front of the European Parliament in Strasbourg.  Photo: Jan Beckendorf License: CC BY SA 2.0 Source: Flickr


Europe has to be more socially oriented. Almost everyone would agree with this sentence because the EU has an imbalance. While integration of the internal market forged ahead, social protection of this economic integration lagged far behind. For a long time, this was also the intention. Because social matters could be effectively regulated at the national level. And the EU’s current social regulatory policy mainly has to do with labour law standards that have emerged as an integral component of the common internal market.

With the failure of the constitutional treaty and no later than the euro crisis, the call for a more socially oriented Europe has become louder. But unfortunately, it is not becoming more clearly defined. Many of the proposals for a socially oriented Europe revolve around improving existing regulations, mainly labour laws such as the principle of equal wages for equal work. The key question of whether traditional national powers for social policy – like the social security systems – should be more harmonised, however, is left out.

There is thus a pressing need for an honest discussion of what we actually mean with the frequent call for a more "social Europe". The elementary question is whether this integration arising from the logic of the internal market, i.e. from eliminating the internal borders, continues to be enough to live up to the demand that ʺEurope has to be more socially orientedʺ. Our hypothesis is that it is not enough and we need, instead, a better regulatory framework in this area.

Already today, we have several ʺpositiveʺ social regulatory directives based on Article 137 of the EC Treaty such as those for health and safety at work (including family policy), part-time work, equality and anti-discrimination as well as European Works Councils. However, these issues mostly require unanimous agreement in the Council which regularly blocks regulations (see anti-discrimination policy). In addition, these are mainly grey areas which is evident from the related discussions about subsidiarity objections.

The new convention called for by the Greens in other contexts would thus have to accept these aspects and put an end to the principle of unanimity so that "negative" and "positive" social policy regulations are finally on equal footing.

Another challenge is that the member states no longer just have traditional social welfare instruments of (re-)distribution at their disposal or their social welfare institutions have come under pressure as a result of the huge integration steps taken on the internal market and as the world continues to becoming increasingly interconnected. As described in the study published by the Heinrich Böll Foundation ʺSolidarität und Stärke: Zur Zukunft Europasʺ (Solidarity and Strength: On the Future of Europe), the integration paradox is that the more member governments cling to their remaining sovereignty in social policy and refuse to engage about basic state welfare questions at EU level, the more power to shape social policy they risk losing as a result.

This applies all the more so if the European level is to be granted further powers in the area of budgetary policy as is currently being discussed. The discussions about Greece’s state spending make it more than clear that it is extremely dangerous to hold a European debate about government spending when the questions of what the government is responsible for and what our social and environmental goals are do not even come up. Europe unilaterally imposes austerity measures – see the austerity programme of the Troika or the fiscal pact – without drawing a line to define minimum social standards. The result is that social achievements are being dismantled overnight. Just as it is correct to eliminate unjustified and excessive privileges in the public sector, it is just as wrong to cut pensions to such an extent that a large portion of the population is suddenly living below the subsistence level.

If the European level is to have a stronger say about a coordinated budgetary policy in the future but also if we want to work more closely together in issues related to tax policy, we cannot avoid discussing fundamental social questions and the national social systems, which have been sacred until now, at the European level – without unifying everything. And this means not just on the basis of abstract goals but addressing the questions of how social security in Europe will be structured and which systems will be applied with which standards and how. As we see it, it is then not just the aspect of compatibility of the social security systems that plays a role but also the question of European solidarity and redistribution, e.g. within the framework of basic European unemployment insurance.

This discussion will not be an easy one because the social security systems involve a core component of our national identity. This step will only therefore be successful if we rid social policy integration of the previous appearance of lacking a sense of direction and calms people’s fears that social programmes will be completely eradicated. In our view, the new European convention mentioned above is also needed to achieve this goal.

...
Annalena Baerbock is on the board of the European Green Party and a spokesperson for the Federal Association Europe (Bundesarbeitsgemeinschaft Europa) of Alliance 90/Greens.

This article is translated from the German by Elisabeth Bunn.


Europe’s common future. Ways out of the crisis

The EU not only finds itself in a debt crisis, it is also faces both a crisis of confidence and of democracy. Now is the time for a broadly based public debate on alternative proposals for the future of Europe. We would like to contribute to the debate with this dossier.