In Recife, the Expropriations Were Denounced Somewhat Late

The hosting of the Confederation Cup was an opportunity in Recife and other cities to denounce the expenses of infrastructure work for the 2014 World Cup and the violence that has been used to enforce the mandatory transfers of residents in the poor communities.

In Pernambuco, one of the main groups denouncing the lack of planning for many real estate ventures is the Urban Rights movement. A graduate student and member of the movement, Rudrigo Rafael, studies real estate dwellings downtown. He has deplored the population transfers surrounding the area of the Pernambuco Arena, especially in the neighborhoods of Santa Mônica, Cosme e Damião (Recife), and in the cities of Camaragibe and Sāo Lourenço da Mata. He has also denounced transfers in areas further from the stadium such as the communities near the Via Mangue roadwork (responsible for about 1,500 transfers) and of all the communities around the north-south roadwork, which goes through the counties of Paulista, Olinda, Recife, and up to Jabotão.

"All the preparations for the World Cup are achieved with public debt and for private benefits. There is no investment in actions and projects for the surrounding communities' rights of leisure, for example," says Rafael. To him, the demands are in alignment with the National Coordination of the Cup Popular Committees (Ancop).

In the following interview Rudrigo Rafael explains how the government's policy for the World Cup is placing impacted families in living conditions similar to refugee camps, why the development projects are killing jobs and how he wants to stop their practice of misinformation. 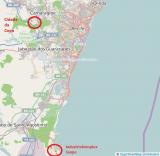 The state government says that the 2014 World Cup's main legacy will be the World Cup Village, including the Pernambuco Arena, which will create a new source of economic growth west of the Recife metropolitan area. How do you see this process, considering the increasing vertical integration of Pernambuco capital real estate?

Rudrigo Rafael: The World Cup Village is not dissociated from the development logic that has been applied in the Recife metro area. The state has been encouraging the expansion of real estate, so much so that the city has the fourth most expensive price per square meter in the country. The state is not in discussion with locals but is more concerned with private governance. It advertises that it will be the first Smart City in Latin America - but smart for whom? Anticipated for 100,000 people, it concentrates on the investments and abandons the other 108,000 who live in the city. This model is artificial and unsustainable, and it will create a crisis very soon. The Suepe port has already announced the dismissal of 67,000 workers – this is more than half the predicted number of people for the World Cup Village (if the project is effectively built). And what is left of improvements and public policies for that area?

How has it been to follow the population transfers, and especially the expropriation caused by the infrastructure work for the 2014 World Cup through the Cup Popular Committee?

The mandatory population transfers have been generating a war scenario and placing the impacted families in living conditions similar to refugee camps, displaced from the "Land of Football," as in the case of the São Francisco Settlement, which represents the case of 9,600 affected people. Families are being thrown in the streets with no access to financial compensation, which is not fair and also does not guarantee them access to another place to live. If the state government were interested, the money budgeted for the compensations – plus some other source of financing – would be enough for alternatives that would minimize the transfers' impacts.

The government uses very selective legal speech. In some instances it uses an old law from 1941, and in some cases it uses innovations such as the RDC (bidding differential regimen) – anything that can justify the exception condition. The Judiciary and the People's Defense do not contest. This way, all the pacts of human and normative rights are ignored, such as the City Constitution and Ordinance. There is no concern for public policy; the partnership is private. For the dispossessed, the money they receive is not enough to buy a house in a growing market.

What are the difficulties in obtaining official information about the expropriation of real estate and World Cup expenses in Pernambuco? Is there a misinformation campaign?

The state produces misinformation all the time. This is not just my word and that of the Cup Popular Committee, but also what the affected families say. They themselves were not informed about the process, and especially not the Cup Popular Committee and the rest of society, which in general has not had access to information about this reality through the mass media. This is also justified because the investments in the media are even higher than the expenses with the stadiums – more than 6 billion have been invested in this sector. One of the main roles of the committees is to generate counter-information, which in this case is real information. There were no real public hearings, there was no debate about the projects in the City Councils, and there are no answers given about legal documents. This has affected directly our ability to anticipate the violations. Lots of time was lost in trying to create a dialogue with the governing body and searching for alternatives that would guarantee a minimum amount of dignity for residents.

Did you follow news of the deaths of tens of people who became ill after being notified about their house expropriation, in addition to the impoverishment of thousands of community residents, in particular those in the São Francisco Settlement, in Camaragibe? What has the reaction been to the accusations of human rights violations? And what are some ideas to diminish the effects of this situation after the 2014 World Cup?

We are trying to produce information, mobilize people, coordinate organizations, organize affected families, and formulate strategies to reverse these violations and guarantee the rights of people to live in the city. These attempts have resulted in, for example, a visit from the UN Special Rapporteur on Adequate Housing, Raquel Rolnik, and the Rapporteur for the Rights to the City from the Brazilian Platform for Environmental, Cultural, Social, Economic and Human Rights, Leandro Gorsdof. Gorsdof offered visibility to what has been happening and has helped to deepen the dialogues with the families. These dialogues have been gaining strength through continual meetings with the affected people, the production of publications (texts, videos, etc.), the realization of conferences, and through participation with Ancop.