Why Armenians Call for a Velvet Revolution

For almost a week now, huge rallies have shaken the Armenian capital of Yerevan, where Nikol Pashinyan, one of the leaders of the movement, called for a “velvet revolution”. But will the protesters this time successfully press for democratic accountability?

The interview was originally published on the Polis Blog.

Armenia, a country of 3 million with a diaspora estimated at around 8 million, was recently categorised as a semi-consolidated authoritarian state. Still, 70 percent of the people argue that Armenians “should participate in protest actions against the government, as this shows the government that the people are in charge”.

In fact since 13 April, up to 40.000 Armenians, who finally want to see their country governed by a democratic political culture, are taking to the streets every day to demonstrate against their government. On 19 April alone, more than 100 protesters were temporarily detained. Polis180 Co-President Sonja Schiffers spoke to Yerevan-based Olya Azatyan about the trajectory of the protests and the latest dynamics on the ground.

Sonja Schiffers: Olya, how was it today? How has the atmosphere on the streets evolved since the beginning of the protests?

Olya Azatyan: People who are out on the streets in Armenia those days in Yerevan, Gyumri, Vanadzor spread a lot of energy. They are angry and that is good. Huge civil disobedience protests started in Yerevan on 13 April and are continuing. On Tuesday, 40.000 people attended the protests. Behind them are the Civic Contract Party and the MerjirSerjin (Reject Serzh) civic group.

We can see that the protests are mostly decentralised and self-organised. The organisers are not always aware or controlling or directing what people do on the streets. So it’s more participatory than previous protests. What needs strong improvement in the movement is the promotion of diversity and opening of spaces for various groups.

The participants should refrain from conservative patriarchal practices and the organisers should work towards this goal. We don’t see this happening now and it’s very unfortunate that a really pluralistic, participatory culture is not fully promoted by the organisers.

Could you give us a more in-depth insight into why Armenians are (again) protesting against their government? Who are the protesters?

This time the trigger was Serzh Sargsyan’s election as prime minister. But the roots of the protests lie much deeper. Over the last years, there was an increasing build up of anger due to social inequality, emigration, systemic corruption, a lack of justice, and non-democratic elections. And since 2007, we can see that civil society groups are stronger than ever before.

Thematically very diverse civic movements (human rights, environmental and urban issues, public property, gender issues) started to emerge and successfully promote a variety of issues. Non-governmental organisations, the media and researchers indirectly created the nucleus of progressive change. So simultaneously with the growing dissatisfaction of ordinary people, they were motivated and ready to act. And now watch how the consequences are coming forward. 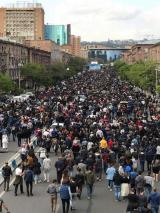 Regarding the socio-demographic characteristics of the protesters, there are quite diverse groups on the streets, however the students form a majority at the moment. For one week already we see student strikes at most of the universities. Half a year ago, hundreds of students from Yerevan State University and other universities held demonstrations protesting against a bill which was later passed by the parliament.

This bill stipulates that in order to get a military draft deferment, all male students who wish to pursue their studies must sign contracts with Armenia’s Ministry of Defense and agree to serve in the military for three years after completing their studies. Apart from the students, we can also see many journalists, NGOs, activists at the protests.

What are the demands of protest leader Nikol Pashinyan?

Nikol Pashinyan and his team demanded that Serzh Sargsyan should not have become prime minister in the first place. Now they are urging him to leave. This message unites a lot of people in Armenia. Pashinyan is not pushing his party politics, which would perhaps not be a uniting factor for the protests. At the same time, we see that Nikol and his party now have the opportunity to become the key opposition to the ruling Republican Party led by Sargsyan.

What one should also know about Nikol is that he is a journalist by profession, used to write about political issues and criticised the government a lot. In 2007, he started an impeachment movement against the then president Robert Kocharyan. Later he was involved in protests against the falsified presidential election results of 2008. After that Nikol was a political prisoner and imprisoned for two years. After his release from prison he created the Civic Contract Party. He has been an MP ever since and was always a strong supporter of non-violent protests and civil disobedience.

How are the official institutions reacting to the protests?

No reaction so far. Only President Armen Sargsyan (no relations to Serzh Sargsyan), who has a ceremonial role, called to abstain from violence. As to the behaviour of the police, it depends on the orders they receive from the top and that is usually not the head of the Armenian police but the Prime Minister Serzh Sargsyan. The past has shown that brutal police actions towards peaceful protesters have at least doubled the number of people at rallies and that this also raised international awareness.

The police has thus learnt their lesson to stay as calm as possible in the streets. However, it seems that they are individually threatening people through various channels and trying to slowly break up street actions. But as the Serzh Sargsyan government feels the slightest danger to its authority, it might use harsher tactics. We all remember the March 2008 protests when peaceful demonstrators came out to protest the results of the elections and eight people were killed.

What does the legacy of #electricyerevan that shook the capital in 2015 mean for today’s protests?

Electric Yerevan is one important factor behind the current mobilisation, but the quality of today’s movement did not build up spontaneously. Previous protests have had a snowball effect. We have a long history of protest movements and a lot of people, online media and civil society organisations continue to invest towards this direction.

At the moment, the street is the only medium where people can express their criticism besides social media. People cannot use TV as they are all delivering political orders of the ruling party and printed media has a very limited circulation. Eventually, being an activist came to be perceived as something good. Protesting became part of urban culture.

What can we expect to happen next?

In the long term this will definitely contribute to Armenia’s democratisation progress. People out on the streets will never give up on this, as they have now felt a sense of liberty. It is yet to be seen how much energy the people will continue to have for daily civil disobedience actions, because this also leads to a burnout at some point.

But I can see a good future for sure, there is no alternative to that. I would like to see the protests transforming into real value-based discussions and debates, leaving behind the huge amount of populist texts and activities. That is what people in Armenia need most.

Portraits
Between 2011 and 2013 alone 5,891 LGBT people left Armenia. This article will tell the first-hand story of lesbian, bisexual and transgender Armenian citizens who have moved to different EU countries.
By Arthur Minasyan

On April 2, 2017 Parliamentary elections took place in Armenia. These were the first national elections after the Constitutional Referendum of 2015 which transformed the country from a Presidential into a Parliamentary Republic. An analysis.
By Olya Azatyan

The conflict, which has flared in the South Caucasus around Nagorno-Karabakh between Azerbaijan and Armenia serves as a reminder that there are other regional conflicts that demand Europe´s attention. And Europe’s response will be no less important than in the case of Ukraine.
By Nino Lejava