Right and Left against the revolution 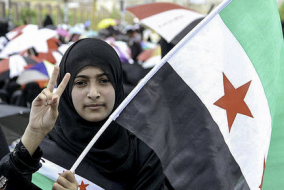 Why is it that the far Right and certain far-Left groups in a number of Western nations agree in their hostility to the Syrian revolution?

For a while now this question has nagged at a number of Syrian friends, who have been shocked by the positions and commentary of various writers and journalists, all of whom criticize the revolution from an overtly hostile perspective, or even defending the regime.

We may go further: Why is it that the Syrian revolution fails to mobilize activist circles within global (or “Western”) civil society, despite the media’s near constant coverage of events and the consequent fact that there exist thousands of images and films depicting the tragedies that Syrians are living through?

The answer to this question appears to be complex, dependent on a set of factors, which are governed both by aspects of the political and cultural perspective on the Arab region as well as the political and ethical standards that guide stances and written opinions on the region’s affairs. These influences contrive to make sympathy or solidarity with the revolution very timid, at least when compared with the zeal with which attacks on the revolution are expressed.

One of these factors is the fact that many political parties and movements are afraid of taking positions on “conflicts” in the Middle East. They sidestep the issue by pleading their “complexity”: too much wars and conflicts, and increasingly divisive religious sectarianism, many of whose effects might reach out across the Mediterranean to its northern shores.

Another factor is the culturalistic approach employed by researchers whose task is to compare and categorize global issues and conflicts, especially those associated with the Arabs and their countries. To these culturalists, Arabs appear to be a people who “favour violence as a means of resolving conflict”, drink deep from the well of extremism and whose ability to shrug off the burden of Oriental despotism and move to democracy or liberation is ever in doubt. Seen in this way, the violence that accompanies the revolution is not exceptional, not in a broader context of perpetual civil war, and neither does it call for outrage or urgent action.

One more important issue is Islamophobia, embraced by the extreme Right for racist reasons, and by certain Left-leaning groups on the pretext of espousing secularism, freedoms and women’s rights. So it is that the wordsmiths of the far-Right find common ground with certain individuals on the far-Left in their support for the Assad clan, the first motivated by hostility to “Islamists”, the second by their “secularizing and modernizing discourse”. To these we may add the “minorities” obsessives, whose constant, wretched refrain is the threat posed by the “majority”. To summarize or translate, all of the above might justify the murder of Syrians on the basis that they are socially conservative Islamists and prefer tyranny because it oppresses the majority to keep the minority safe and sound.In this they commit a grave moral failing and give voice to a religious racism and assorted stereotypes diametrically opposed to the human rights and progressive values they claim to respect.

Yet another aspect is the ease with which many political activists have surrendered to conspiracy theories, out of fascination, the desire to give an impression of understanding the way things really work and a conviction that international relations are essentially malevolent in nature. Some on the Left are pretty much addicted to this kind of thing, though they lost their monopoly on their production some time ago now. Bolstered by such beliefs, they refuse to look at the Syrian people, their aspirations and their sufferings and instead make do with clichéd claims about international relations and regional conflicts in terms that explain the “hidden truth” behind the surface appearance.

The conspiracy-theory is closely linked to another matter: the condescending attitude displayed by certain progressive writers and opinion-makers in analyzing issues that affect populations in the Arab world. They tend to ignore questions such as human dignity and individual freedom, and they rarely touch on aspects of political sociology in their analysis. What concerns them are borders, oil, geo-strategy, the influential roles of regional states and the “decisions” the West makes about them. Some, of course, look to China and Russia, hoping a return to the Cold War. In this they too touch on racism, albeit from a position of “defending” what they consider to be “the interests of Arab world” against “Western imperialism”, dealing with whole nations as if they were abstract entities devoid of flesh-and-blood people with rights of their own, or as if these populations were mindless, mute monoliths whose progress must always be plotted for them, misled by Western lies and mobilized by the media (as if by remote-control). The only solution? To rally around the one who “protects” them from “foreign attack”, even if he crushes them in the process.

There are also those intellectuals and thinkers, many of whom have bravely championed the Palestinian cause, who have steadfastly refused to back the Syrian revolution pleading their fear of Syria’s fragmentation and the spread of chaos, a situation which would “play into Israel and America’ hands” as they say.

Finally, we have those western writers whose fame and credibility rests on decades spent resident in Arab countries criticizing their home countries’ policies towards the region, who are now ready to lie and deceive just to keep their place in the spotlight, stir controversy and counter what they portray as complacent “mainstream” attitudes in their media. Now of course, these mainstream attitudes are no longer in conflict with the “humanist” values they always claimed to take into account.

We could add other factors, of course: the viewer-fatigue and boredom displayed by large segments of Western public opinion towards Arab revolutions, particularly in the wake of the Muslim Brotherhood’s electoral triumphs in Egypt and Tunisia, the war in Libya and the protracted nature of the Syrian revolution itself. We could mention the geographical location of the Levant, the US’s failure in the post-Saddam experience in Iraq, the (legitimate) doubts over roles played by Saudi Arabia and Qatar in Syria and the region, and concerns over the impact of Syrian instability on the region as a whole (Israel first and foremost). No must we forget the exertions of the Syrian regime and its allies (Lebanese and Arab, plus a few European “experts”) who disseminated articles and information (sometimes fabricated and sometimes correct but taken out of context) about the revolutionaries, their activities and the horrors awaiting Christians in Syria and the Levant as a whole.

The Syrian regime and the revolt

All these factors combine to efface the underlying truth, which is uncomplicated and demands no great effort to take a reasonable moral and political position on it: the majority of a population in revolt against a regime that has ruled Syria since 1970, in which time it has shown not the slightest hesitation to commit massacres, to imprison citizens, to rob and exile them, all for the sake of holding on to its (dynastic) power and (mafia-like) privileges. As for talk of regional and international conflicts, of interests and political manifestos and alliances and fears, it certainly has a place in forming positions on this revolution (whether on the Right or Left) and should be expressed, but only after a firm position on the original issue has been stated: the Syrian people’s right to fight until they turn the page of 43 years of tyranny.

To conclude, the Syrian revolution today is not just fighting a brutal regime like the Assad regime, but it is also fighting this regime’s allies - Russia and Iran especially - and furthermore it is dealing with the putrid concepts, alternately racist, indifferent and immoral, bandied about by many Leftists and “anti-imperialists”. Until now, and for many reasons that should be looked into, it has not possessed a political leadership or media office responding regularly to all its enemies and their arguments. To make up for this lack so far, it is counting on bravery and perseverance, on exceptionally courageous and creative intellectuals, artists and activists, and on a great store of patience and hope which has allowed it to soldier on; a store not likely to be exhausted even as the pressure grows and difficulties mount, both within Syria and around it.


Our dossier aims to present analytical articles and interviews that shed light, from different perspectives, on what is happening inside Syria. In addition, by including videos produced by our project partners in Lebanon, it provides access to the perspective of Syrian activists who, through art, express their hopes for a better future. » Dossier: Syria two years into the revolution