"I don’t think Hun Sen is serious about democratic reforms" 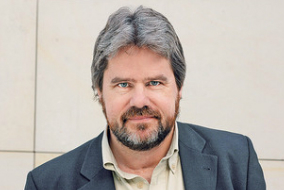 Thilo Hoppe represents the Alliance ‘90/The Greens as a Member of the German Bundestag and is currently Vice Chairman of the Parliamentary Committee for Economic Cooperation and Development. Photo: Grüne Bundestagsfraktion Licence: CC BY-NC-SA 2.0 Original: Flickr
July 15, 2013

Heinrich Böll Foundation: Parliamentary elections are taking place this July in Cambodia for the fifth time since the 1990s. The hands down favorite candidate is Prime Minister Hun Sen, who has been governing for decades. His political style is criticized internationally as authoritarian and corrupt, and is characterized by legal uncertainty and a lack of rule of law. What expectations do you therefore have of the upcoming elections and of Hun Sen, who will most probably continue to shape the politics of his country for years to come?

Thilo Hoppe, MdB: The elections in July are not expected in the least to be free, fair or independent. All of the appeals made to Hun Sen and his governing party, the CPP, to implement democratic reforms have been ignored by the Cambodian government. The EU and the UN have decided, in contrast to the past elections, not to send any election observers this year. The UN justified this on the grounds that since their recommendations from the past elections have not been carried out, an observation mission would therefore be meaningless. This speaks volumes.

The media, as well as the National Election Committee, are largely controlled by the CPP. Irregularities in voter registration have been detected, and bribery and intimidation of traditional non-CPP voters have also been documented. Hun Sen has recently thrown the few remaining opposition politicians out of the parliament. I don’t think Hun Sen is serious about democratic reforms or the effective implementation of all the human rights conventions that Cambodia has signed. And if he were serious, he would have to act immediately and also, before the elections take place, publicly rescind his threats of what would happen if he and the CPP should lose the election.

The German-Cambodian development partnership focuses on promoting rural development and advocating democracy, among other areas. This cooperation shall take place within the German Federal Ministry for Economic Cooperation and Development’s (BMZ) human rights concept, which explicitly assigns matters pertaining to extraterritorial obligations of implementing human rights and the binding effects of human rights treaties to individual states.

For years, various UN committees and organizations have expressed concern over the massive human rights violations in the Cambodian land sector and the resulting impoverishment of large parts of the population. Specifically, in 2009, the UN Committee on Economic, Social and Cultural Rights decidedly highlighted the Cambodian authorities’ active involvement in violent land grabbing and demanded an immediate end to this practice. The same committee, as part of its analysis on Germany’s extraterritorial obligations in 2011, expressed concern that the German development cooperation was involved in projects in the Cambodian land sector that led to economic, social and cultural rights violations. The committee recommended that the German government establish policies and strategies that would prevent future human rights violations in the land sector. How should the BMZ concretely respond to the UN’s recommendations?

When a UN committee expresses such concern over the development cooperation’s project, then it should be taken seriously. I think, however, that it is more the context in which GIZ projects are implemented rather than the project itself that raises serious concerns. In the bilateral negotiations of 2011, the German federal government established various milestones (specific obligations) with the Cambodian government that must be fulfilled in order for further cooperation to take place. Although several of them have not been met, the current conservative-liberal government has not yet backed away from further financial and technical cooperation.

The German federal government has now commissioned several studies on the impacts of land title programs and on the human rights situation in the project areas, which is very commendable. However, many of these studies have been long kept under wraps; one of the GIZ commissioned studies from 2005, for example, has just now been released, after repeated requests from parliamentarians and civil society. Even now, information from this and other studies should not be divulged because they are considered to be highly sensitive for further German-Cambodian cooperation. I consider such a policy of withholding information from the parliament to be extremely problematic. The BMZ could do much more to implement the UN recommendations.

In view of the upcoming German-Cambodian government negotiations in the fall 2013 – how should the framework for future cooperation, especially concerning the Cambodian land sector, look like?

Should the elections proceed as hitherto feared and under the circumstances described by Dr. C. Kek Pung in her interview for the web-dossier of the Heinrich-Böll-Stiftung, then further cooperation with Hun Sen’s government is to be placed under great reservation. I’m watching Hun Sen’s land registration campaign (Directive 01) with great concern. The basic idea of providing the poorer population with secure land titles is, however, well-worth supporting.

But it is obvious that the implementation runs to the contrary. The campaign was started without any consultation with civil society or the affected persons, is financed by the CPP and the companies associated with them, is coordinated by the prime minister’s son, and is run by a voluntary youth organization in military uniform. This project is completely dependent on the will of the prime minister and his associates, and operates outside of the law. Human Rights Watch and other NGOs have already documented cases in which land titles have not gone to peasant families, but to those who have connections to the political elite. Even the prime minister’s moratorium on economic land concessions hasn’t been adhered to – on the contrary, since the moratorium, 15 additional such concessions have been granted.

It is obvious that Directive 01 serves as a campaign tool – it is not for nothing that Hun Sen has threatened to withdraw all land titles awarded under the directive, should he lose the election. In view of this serious circumstance, it is a mystery to me how the German government can come to a “cautiously optimistic” assessment of the situation, as they have shared with us.

We are calling on the federal government to make clear in the bilateral negotiations this fall that governmental cooperation in this area will only continue if the prime minister’s land registration campaign is either ended or comprehensively reformed. Part of the reform must include, among other things, converting the land registration campaign into an independent, institutional program and involving civil society and the aggrieved parties early on in the process. In addition, there needs to be an independent mechanism to handle complaints and clear goals and criteria that are oriented on human rights and poverty reduction.

German cooperation with Cambodia focuses primarily on state institutions. In view of the human rights violations by institutions close to the government, could alternative partnerships be considered – for example, at the civil society level?

Should the Cambodian side of the government negotiations not engage in the above mentioned (and other democratic) reforms, then the logical consequence would be a suspension of international cooperation and to instead provide targeted support to civil society. It is imperative that the German government keeps this option open. Diverse German and Cambodian NGOs, as well as political foundations have been conducting excellent work in Cambodia for years, not least in the land sector. A stronger partnership with civil society could be built here.

Not just states, but also companies, banks and investment firms are considered major players in international land grabbing. German and international human rights organizations such as FIAN and Global Witness accuse German companies and banks of participating in global land grabbing. What role can policy, and the federal government in particular, play in getting German actors to be more accountable in complying with human rights standards and to protect human rights?

In 2012, the UN Food and Agricultural Organization (FAO) adopted a very progressive instrument, the Voluntary Guidelines on the Responsible Governance of Tenure of Land, Fisheries and Forests in the Context of National Food Security. It is now important to make these guidelines binding to give it teeth. In our newly introduced proposal to the Bundestag for a coherent policy strategy to overcome hunger, we made concrete suggestions regarding this issue, inter alia.

The 2013 elections in Cambodia are hardly expected to be free and fair. In this dossier, we examine what this means for the future of the country. Through analyses, interviews, films and studies, we pursue a critical discussion about Cambodia’s development, and give a say to Cambodian and German representatives of civil society and politics.