A clear problem but hardly any consequences 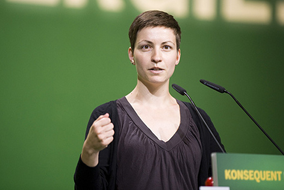 Based on a conversation with Ska Keller, MEP: The EU’s Resolution of 26 October 2012 on Cambodia in Retrospect

Introduced by multiple parties and unanimously adopted, the Resolution of 26 October 2012 shows a united European Parliament in their assessment of the situation in Cambodia.

Based on reports and assessments, including those of the UN’s Special Rapporteur on the situation of human rights, the EU’s 2008 election observers, and a declaration by the EU’s High Representative for Foreign Affairs and Security Policy, Catherine Ashton, the parliament concluded the following:

The Phnom Penh-based newspaper, Cambodia Daily, declared this resolution to be “highest ranking and the sharpest objection to the human rights situation in Cambodia in recent years.”

Furthermore, the EU parliamentarians laid out very concrete expectations in the resolution for the Cambodian government. “Whereas the EU is Cambodia’s single largest donor,” the EU parliament strongly urged the government of Prime Minister Hun Sen to respect the political rights of its citizens and to cease all forced evictions so that “future economic land concessions are granted in accordance with international human rights law and to ensure that all those forcibly evicted are guaranteed adequate compensation and suitable alternative accommodation.”

Moreover, the Cambodian government is also called upon to “implement the recent UN recommendations on reforming the electoral system to ensure it conforms with international standards before, during and after the casting of votes.”

Suspension of the Everything but Arms (EBA) Initiative

In view of the trade preferences granted under the Everything but Arms (EBA) initiative, which allows the poorest countries in the world to export goods to the EU without restrictions or duties, the EU parliamentarians urge the Commission to “examine the escalation of human rights violations…resulting from the award of land concessions…in connection with the export of agricultural products to the European Union and to temporarily suspend EBA preferences for Cambodia when human rights violations are detected.”

The Everything but Arms (EBA) initiative, according to the Green EU parliamentarian, Ska Keller, “is in itself a very good thing. It becomes problematic when it causes the agricultural sector to continue expanding, land-use change, and everything to just be geared towards export.” This has been exactly the case since EBA preferences have been granted and the EU sugar market has been liberalized. Foreign corporations acquire valuable farmland, usually together with Cambodian partners that have close ties to the government, and plant sugar cane. This has sharply raised sugar exports to the EU from 10,000 tons in 2010 to 22,500 tons in 2011. Cambodian farmers and NGOs therefore demand the suspension of preferences for the “bittersweet” sugar, also called “blood sugar” by some activists.

However, the EU Commission is reluctant to initiate an investigation of these practices, as urged by the parliament. In response to a parliamentary inquiry from Ska Keller, Trade Commissioner Karel De Gucht expressed “concern” in March 2013 and referenced “some diplomatic efforts”. Also shortly thereafter, an appeal made to the Commission by 13 EU parliamentarians to immediately begin a comprehensive investigation was unsuccessful: The request was rejected by Catherine Ashton and Karel De Gucht on the grounds that other avenues that would better serve the sustainable development goals of Cambodia were preferred. According to the rules of granting preferences to developing countries, the EU Commission is required to initiate an investigation when human rights violations are officially classified as “serious and systematic.” They did this, for example, in the cases of Sri Lanka and Myanmar.

The UN Special Rapporteur in Cambodia, Surya Subedi, whose 2012 report was the base for both the EU parliament’s resolution and MEP Keller’s inquiry, speaks on the contrary of only “serious and widespread” human rights violations, a small difference in the assessment that leads to very polar positions. The carefully selected phrasing in both cases reflects the varying assessments of sanctions, i.e. whether they are more useful or harmful in achieving a political goal.

While the EU Commission obviously believes that a continuation of the trade preferences for Cambodia will be useful for the country to create economic growth, income, and in the medium-term, lead to democratic conditions, the opponents believe that sanctions will support the people, whose rights have been infringed upon, and that democratic space will grow in Cambodian society. The latter may refer to the quick concessions that the Cambodian government made to the World Bank: As the World Bank, in an unusually clear reaction to the very critical findings of its Inspection Panel, which had investigated the evictions in Phnom Penh, suspended further loans.

For the Green politician Ska Keller, what benefits the Cambodians is crucial: “What sets us Greens apart from other parties in the European Parliament is that we look primarily at the interests of the people in developing countries, not at the interests of the government. We want to know what impacts trade agreements have on the workers or on the environment in the partner countries.” Therefore, the Green parliamentarian would like to see the EU resolution result in action, even if a suspension of the preferences is associated with risks and may result in new problems. According to Keller, a repeal of the preferences would affect the small sugar-exporting farmers in a similar way as the large agricultural companies, who are responsible for deforestation and forced relocation. The goal of development cooperation must take a more differentiated view of the economy, and not focus on exporting agricultural goods and raw materials.

The EU Strategy Paper for Cooperation with Cambodia (2014-2020), which is currently underway, must, according to Ska Keller, be more strongly focused on human rights – as does the EU foreign and security policy in general.

The Cambodian parliamentary elections are to take place on July 28, 2013. The EU parliament, in its resolution, called upon the EU Commission to “closely monitor the implementation of the UN recommendations by the Cambodian authorities.” The European Parliament expresses, among other things, “concern about the situation of Sam Rainsy, the leader of the Sam Rainsy Party, who has been convicted on charges that are allegedly politically motivated.” Rainsy lives in self-imposed exile in Paris and cannot run in the election. His party won 21 per cent of the votes in the last elections and became the largest opposition party.

Despite this and the alleged defects of the 2008 election, which occurred in spite of an EU election observer mission numbering over 130 people, the EU Commission is not sending any observers this year, but is only sending two technical experts to Cambodia instead. After three consecutive EU election observation missions (EU-EOM in 2002, 2003, and 2008), the upcoming parliamentary elections are not on the EU’s priority list: A decision, according to Catherine Ashton, that was made after consultation with the member states and the European Parliament.

The head of the EU delegation in Cambodia has however, on February 18, called on Cambodian Prime Minister Hun Sen to “create a climate open and conducive to assembly and freedom of expression, among other areas, for the election in July 2013.” The developments in the run-up to the elections (see the interview with Dr. Kek C. Pung in the this web dossier) show, however, that the Cambodian People’s Party (CPP) is determined to win at all costs: The campaign is “as dirty as ever before,” reports the Economist from Phnom Penh. Hun Sen “puts no value on a clean win.”

Ska Keller points to a fundamental problem of EU policy: Actual foreign policy responsibility lies with the member states. The EU’s development policy is quite progressive, but the political pressure comes rather from foreign ministries and embassies: “There is no mechanism that allows the European Union to say: We see a problem and we must proceed together to solve it.” In addition, the EU parliament can only conduct a very limited election observation, while the demand for free elections in a partner country is something that can be insisted upon through a resolution.

Although this resolution was non-partisan and unanimously passed by the European Parliament, it has only moderately moved the addressees. The Cambodian chargé d'affaires in Brussels, So Soengha, protested in a letter a week after the adoption against the “false and biased” resolution. Basic corrections “in the system” have therefore not taken place and the elections will obviously be used to strengthen the rule of the prime minister and his party and to secure their privileges.

Neither the member states nor the Commission apparently intend to set a signal in regard to the elections and to exploit the possibilities of the Everything But Arms initiative, i.e. to connect generosity (Everything but Arms) to principles (sanctions in the case of systematic human rights abuses), to have targeted reactions (on a specific product) and to be flexible (temporary suspension). Well-thought-out, but unfortunately – despite a European Parliament request – not utilized.

The 2013 elections in Cambodia are hardly expected to be free and fair. In this dossier, we examine what this means for the future of the country. Through analyses, interviews, films and studies, we pursue a critical discussion about Cambodia’s development, and give a say to Cambodian and German representatives of civil society and politics.