Syria: Rape as a weapon of war 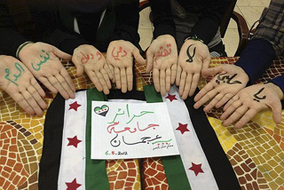 Greetings to the women of the Syrian revolution; to those forced to taste bitterness

With these words, the German journalist, Maria von Welser, opened the episode of her famous television show Mona Lisa that discussed the atrocities committed by Serbian forces against thousands of Bosnian women during the bloody war that raged in the Balkans in the 1990s. The individual and mass rapes carried out by militias prior to, and following, every one of their ethnic cleansing operations constituted one of the most savage weapons deployed by the Serbs in their total war against the Bosnians, a war that transcended mere massacres (clearly not enough to quench the troopers’ thirst for blood) to attain the status of a near-holocaust. Most savage, but more than this: cheaper. A Serbian field commander testified that rapes were not only less costly than petrol and tanks and rocket batteries, they were cheaper than a bullet, too. By the time the madness abated more than twenty thousand Bosnian and Herzegovinian women had experienced this truth, some many times over.

Fifty years prior to this broadcast the German armed forces were not only laying waste to the cities and plains of Poland and Russia, but enacting their own private blitzkriegs on the bodies of women living in the combat zone, with Russian women receiving the lion’s share of the treatment. Experts inform us that in those areas under German military control nearly two million cases of rape took place, running the full gamut of atrocity and horror. Later, Soviet soldiers high on victory and vodka found little difficulty in returning the favour in scarcely imaginable orgies of vengeance that embraced even the elderly and young children. By the time the Third Reich fell more than two hundred and fifty thousand German women and girls had sampled the bitter taste of rape, a taste that stayed with them till their deaths.

The long and storied history of rape offers another instance of systematic bestiality and atrocity: that committed by Japanese forces in the former Chinese capital in 1937 in what came to be known as the Peking massacre. Not only did they physically lay waste to the former Chinese capital, killing more than three hundred thousand civilians and unarmed conscripts in the process, they also spent six weeks raping twenty thousand women, girls and female infants in the most unimaginably sadistic manner. The stern-faced Japanese warriors vented their spleen with such vileness that memory of it was preserved in the hearts and minds of all subsequent generations.

A casual overview of the civil and nationalist conflicts and wars that have graced the planet in recent years tells us that rape was, and remains, one of the most vicious weapons in the hands of soldiers and rebels and the mobile death squads tasked with “eliminating” their enemy (the “other”). It is not confined to wars between different nationalities and peoples, but crops up in civil wars and armed conflicts between different cultural and social groups, as well as being a tool in the suppression of uprisings and revolutions across the globe. Hutus and Tutsis both raped in their mutual war of extermination in Rwanda; the Arab Janjaweed militias practised it in Darfur; all sides in the Congolese civil war raped; Gaddafi’s militias carried out rapes in their assaults on the towns and villages of Western Libya as part of their repeated attempts to force the rebels to submit to the Colonel; and finally, it has been used by Al Assad’s militias in Syria.

Scarcely a year into the Syrian revolution, reports came in from various sources that soldiers from the regime’s army, security troops and intelligence operatives were carrying out rapes in insurgent villages and towns under attack. The information, which was not sourced exclusively from revolutionary activists, suggested that there were tens of cases, the most brutal of which was the case of the two young girls—one ten years old and the other fourteen—who had been raped and made pregnant. It was a grotesque story: two children bearing children! There were other reports of sexual assaults and rapes practiced on both female and male detainees, even children, in interrogation centres, security stations and intelligence facilities. Some of these assaults were to gratify the sadism and sexual needs of the perpetrator while others seem to have been committed to gratify the desires of certain officials from the agencies in question: a way of relieving their frayed nerves after months of facing the courageous cries of formerly silent Syrian citizens.

In the Balkan war, at least, as well as other civil wars in Africa, there is evidence that rape was a key part of an overall strategy aimed at breaking and destroying the enemy, particularly in those cases when the top brass were considering plans for ethnic cleansing. Delusions of racial superiority and historical injustice (however distant or untrue) were used to fire the imaginations of frontline troops and militias, to prime the fuse for an eruption of unrestrained and destructive bestiality: the worst of all the weapons of mass destruction. The phenomenon of “political rape” in conflict and war requires proper consideration. Why do sexual instincts erupt with such ferocity and barbarism when the situation on the ground is one of complete military superiority and control? Some views talk of the social biology of sex-deprived and expectant combatants combining with the hormonal factors affecting “male victors” who are driven by high testosterone levels. This is in turn boosted by a mass hysteria in which the individual and his values are submerged by the bestial energy of a male crowd, and the hordes of bloodthirsty troops end up falling upon their historical and physical victims. Women, anything associated with the opposite sex, become objects, the targets for the most primitive and violent behaviour.

Yet this alone does not provide an adequate example of political rape, especially when it comes to civil war when violence can reach its highest levels in pursuit of eliminating, crushing and demeaning “the other”. This, in fact, is the essence of political rape. Looking closely at the latent significance of rape operations in wars, conflicts and the suppression of civil disobedience, we find that there is a clear link with two things. The first of these is the image of the victim as “the other” in the individual and collective mind of the perpetrator(s). It is the notorious “Who are you?” spouted by Gaddafi in his rambling speeches that combined half-baked theorizing with chilling threats. The second is connected to a profound sense of power and authority, allied to an even deeper sense of the necessity to put this power into effect, to display it as violently as possible, to make the victim fully aware of just who it is he is facing. It is the question, “So you want freedom?”, the rhetorical inquiry of unfettered power with its admixture of brutal, bloodthirsty debt-settling.

Talk of “thousands” and “hundreds” and “tens” should not obscure the intensely painful individual suffering attendant on every single incident. The crime of rape is unique among forms of violence against women in its ability to create a merciless and immersive awareness, enveloping the victim and waging war on all her senses together. With the total appropriation of the victim’s body, the boundaries of the “embodied” self are violated. The sensors that demarcate these boundaries are wiped away through a forcible seizure that the perpetrator uses to inflict the maximum possible amount of psychological and physical pain. Though the visual, aural and touch senses give great scope for aggression, it is the violation of one’s sense of smell that leaves the worst and deepest scars in the victim’s memory. When the battle is over the stench of gunpowder and fire will fade, but with rape, the smells associated with the attacker and the incident itself prove ineradicable, pursuing the victim as tirelessly and unfeelingly as wolves.

“They made us kneel on the ground around the square and removed the blindfolds from our eyes. We were shocked to see a young girl in her early twenties, tied to the bed and totally naked. A security officer raped her. The girl looked totally exhausted. She didn’t cry or scream. It was like she had lost all feeling; like she couldn’t feel what was happening to her.” [1]

Literature on traumatic disorder states that when we are exposed to threatening or terrifying experiences like that of rape an unconscious psychological process takes place, in which we trigger a defence mechanism that allows us to “withdraw” from the situation. This has the appearance of a total surrendering to the aggressor, while the victim “observes” the incident in a disassociated state.

Indeed, this phenomenon is known as disassociation and represents an attempt by the unconscious mind to reduce the severity of the trauma and prevent total psychological collapse. During the process, the brain secretes an intoxicant like opiates and androphene to raise the body’s pain threshold while brain centres responsible for storing short term memory data are shut down by means of flooding the hippocampus with high levels of cortisol, better known as the “stress hormone”. Though one is typically equipped to respond to dangerous situations with the “fight or flight mechanism”, through the operation of the cortisol pathway (i.e. the pituitary gland, the adrenal gland and thalamus), the high levels of violence involved in rape do not allow victims to put it into operation. The victim is forced to deploy “disassociation” as a last-ditch solution to reduce the impact of the trauma and the psychological and physical pain induced by the rape.

We have a duty not to be surprised at the manner in which the victims respond and never naively ask why the victim had not taken this or that action. To take this line is to engage in a second rape, one the victim could most certainly do without.

One day, a new Syria will come to be, as in Germany and Russia before it, a place where flowers bloom to the horizon. When that day comes, however, we must tread softly, take it slow. It could be that the ground beneath our feet or the alleys where we walk are places where defenseless, powerless women once moaned in pain. It is then that we must ask: “What did we do to halt the spread of these weapons of mass destruction?” Maybe these souls, at once living and dead, will plead on our behalf, for the sake of our profound silence in the presence of their own, profounder silence… And peace be upon you!

*This article first appeared in Arabic at al-Awan website. It was republished with the permission of the author on the Heinrich Boll Stiftung website. This is a translation of the original.

[1] Testimony reported to the writer by a former detainee in one of the Syrian regime’s prisons.

Jamal Khalil Sobh is a Syrian-Palestinian from Damascus. He is a graduate of Damascus University and Aachen Technical University. Thanks to a DAAD scholarship, he obtained his doctorate in Developmental Cross-cultural Psychology from Aachen University in Germany. A researcher and specialist in the field of psychology, he is a member of the German Association of Psychological Specialists and currently works as a psycho-therapist at a clinic in Aachen.

Our dossier aims to present analytical articles and interviews that shed light, from different perspectives, on what is happening inside Syria. In addition, by including videos produced by our project partners in Lebanon, it provides access to the perspective of Syrian activists who, through art, express their hopes for a better future. » Dossier: Syria two years into the revolution