In order to sensitize young people between 16 and 18 for the uniqueness of Lebanon's political system, a project similar to the Model United Nations (MUN) organized a two-day simulation of the Lebanese parliament.

“The Speaker of the House and the Bureau of the Parliament remind you, the parliamentarians, that the floor is now open for amendments”, - sounds of rustling paper resonate in the auditorium of Haigazian University. On this Sunday morning, the air is humming with concentrated whisper as well dressed youth deliberates on modifications for law proposals. 32 young parliamentarians from Tyr, Saida, Tripoli, Mount Lebanon and Beirut convened in Beirut on March 22nd to simulate a plenary session of the Lebanese National Assembly. For two months, the students aged between 15 and 18 years, dedicated their Saturdays to prepare themselves and their draft laws for this day’s plenary session.

For four hours, the participants debated, amended and voted on four different draft bills developed within the committees. The composition of the four committees aimed at guaranteeing gender equality and mixing up students from public and private schools, and from different cities.

Public interests and private responsibility – the case of environmental questions

The vivid discussions on each of the subjects revolved around issues with which every citizen in Lebanon is confronted. The Committee for the Environment put a special emphasis on the role of Sukleen as a private company commissioned by the state. In the draft law submitted to the plenary, the committee members called for the establishment of sanctions on Sukleen in case the latter did not fulfill the tasks bestowed upon it by public authority, and for opening up waste management to competitors.

“If Sukleen agrees on a contract with the Lebanese state or a municipality, it agrees on serving a public cause – so we need to make sure that it abides by the rules of the contract, and that it actually assumes the responsibility linked to this”, participant Nour* stated.

Critical voices asked whether waste management should be outsourced to private players in the first place or entirely be ensured and administered by the state.

“We should not start by punishing private players for deficiencies imputable to the Lebanese state. Waste management is a public issue – so it is the state that should be held accountable in the first place, not Sukleen as the executive company”, a female parliamentarian called upon her colleagues.

Raed, a member of the Committee for Press Freedom and Journalistic Self-Censorship in Lebanon, opened the debate on media responsibility and freedom: “Of course it is the journalist himself who ultimately remains responsible for what he writes, publishes and broadcasts. But we as the National Assembly need to make sure that a journalist in this country feels safe enough to think critically, and to publish this critical thoughts, before discussing the professional ethics of journalism”.

The discussion mainly focused on reducing the political and sectarian influence on the media and protecting journalists from being intimidated or even threatened when trying to provide objective and critical coverage. Given the complexity of confessional affiliation, political power dynamics and the media in Lebanon, the committee members tried to draw attention to the fact that media freedom in Lebanon is rather threatened by a – more or less deliberate and conscious – decision made by many journalists not to publish certain information and comments than by actual censorship institutions. “If a journalist was not compelled to report in favor of a certain politician or party, or even to take bribes from them in order to make a living, then the problem of sectarianism in the media would not even be existent”, Souha argued.

The committee draft law contained a proposal to prohibit ownership of media outlets for political parties, as well as establishing a minimum wage for journalist as an incentive for impartial, balanced and non-sectarian reporting. It also contained proposals to reform the national audiovisual media council.

Critics of the draft law voiced concern about the possible impact of an entirely free media system on the country’s societal cohesion and public order in particular: “We all know how fragile social peace is in this country. We all know how easily the media can manipulate information and cause agitation and unrest. Freedom can be dangerous if it is not controlled. This applies to the media in particular. We need to control our media in some way – all other would lead to anarchy and violence”.

The participants went far beyond technical aspects of establishing a free and impartial media landscape and debated on the interdependency between political power and the media as a possible ‘institution’ capable of controlling this power, thus linking the question of media freedom to that of public security.

Human Rights Awareness among the Internal Security Forces – how to operationalize compliance with Human Rights principles?

One of the most ambitious proposals regarding human rights awareness among the internal security forces was to introduce a penalty of one year of prison in case of alleged use of torture by a member of the Internal Security Forces (ISF): “But where does torture begin?“, Dima asked. ”There is no clear definition of torture in Lebanon! We should work on a precise definition first“. Some more radical voices even spoke out against the prohibition of torture, seeing it as a means of obtaining information by detainees.

The students mainly discussed the role of the ISF as an executive force – and thus as a representative institution of the Lebanese state – and on the use of torture as a concrete example of human rights violations. In this respect, the participants developed far-reaching demands concerning both the revision of the definition of ‘torture’ in the Lebanese Penal Law and punishments for ISF members accused of human rights violations.

Given the sensitivity of the topic, the committee members primarily focused on how to render existing initiatives and mechanisms – such as the ISF Code of Conduct passed in 2012 – more efficient.

In Lebanon, women cannot pass the Lebanese nationality to spouses and children. One parliamentarian argued it would endanger the country’s demographic and confessional balance if this was changed: “We don’t have enough space in Lebanon“, Hani stated, thereby kicking off a vivid discussion in the plenary : ”I agree with our colleague Hani. The Lebanese women would then for example marry a Palestinian refugee and give him the Lebanese nationality“, Samar confirmed. ”But Lebanese men do the same with Palestinian women! We should not make a difference here – don’t you see how your argument is deprived of any logic?“, Hiba answered back.

The next speaker refocused on the original problem of the topic: „Women do have the same obligations as men. So why should we not accord them the same rights ?“, Haid countered in the end of his speech.

When the session closes … the real debate begins

”We are now voting on the closure of debate“, the Speaker of the House announces. “All those in favor, please raise their hands“. It is four o’clock in the afternoon, but the participants are not yet ready to come to an end. The students acquired a taste for democratic exchange. One last time they make use of their voting power.

Today, the young parliamentarians were more efficient than most real parliaments: With voting on four laws and 24 amendments in one afternoon, the students proved their interest in practicing their rights of democratic participation and their ability to work on solutions for some of the country’s most urgent challenges.

Even though the floor was closed for the day, the actual debate about current political challenges in Lebanon had only been opened – to be continued in schoolyards, family homes, and for some of the participants one day maybe even at the Place de l’Étoile, in the real Parliament.

All names in the text have been changed.

If you cannot overthrow the tyrant, co-operate with him – after four disastrous years in Syria this seems to be the conclusion the international community has arrived at. A comment.
By Bente Scheller

Where the “Good Guys” get their motivation from

There's little hope for an improvement of the Syrian situation. Nonetheless, there are civil society activists who are still working on non-violent resistance and democratic change.
By Sarah Schwahn 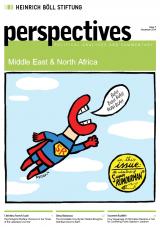