Just weeks before the Olympics, the state of Rio de Janeiro has declared a "state of calamity" over finances. Money is missing for education and health, as well as to pay salaries and pensions of civil servants. The federal government has to help out so last construction sites for public transport can be finished and to guarantee public security during the Games.

The empty public budget has many causes. Even if Rios Mayor Eduardo Paes, a big supporter of the Olympic Games, repeatedly insists that the funding for the Games is predominantly private, he cannot ignore the fact that the Games contributed to the state's bankruptcy.

Julia Bustamante and Caio Lima from the Instituto Políticas Alternativas para o Cone Sul (PACS) analyse the Olympic budget and show that the public money spend for the Olympics is higher that officially communicated: Considering the waivers and unaccounted tax exemptions, public expenditure and transfers of government to public-private partnerships, the Brazilian state is the true promoter of the Olympic Games.

The public costs obscured by the Olympic budget 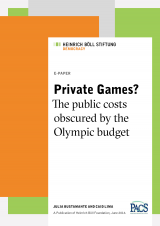 A publication of the Heinrich Böll Foundation, June 2016
Download (PDF) »