The situation around occupied Crimea remains unstable. Within the last days, Russia has accused Ukraine in “state terrorism” and started massive military drills along Ukrainian border. Fears of a new Russian invasion are rising among Ukrainians. Still, even without it, the current escalation may result in further oppressions against pro-Ukrainian citizens, living on Crimea, and further anti-Tatar oppressions. Heinrich Böll Foundation Kiev keeps informing you on the situation summarizing the available information.

What is happening right now?
As on August 15th, the situation remains escalated. Russia has continued to concentrate troops on Ukrainian border. Still, after a meeting of Security Council of Russia on August 11th, no direct steps were undertaken towards a possible military escalation. Russian ministries were just advised to “develop and offer” possible steps, but not to undertake these steps, what looks more like a pressure against Ukraine.

Is a Russian military invasion possible?
This is the most important question and it remains unclear. Many Ukrainian experts speculate on this topic, pointing out massive Russian military exercise “Kavkas-2016” (Caucases 2016), taking place this August. Last year, 95.000 troops, 7.000 vehicles and 150 jets have taken part on exercise “Kavkaz-2015” along the Russian-Ukrainian and Russian-Georgian borders. In the year 2008 exercise “Kavkaz-2008” took place just a few weeks before a Russian invasion to Georgia. On August 15th, Russia has also started “anti-terrorism” navy exercises around Crimea.

How did the situation develop?
After having partly suspended the operation of checkpoints at the administrative border with Crimea in early August, on August 10th the Russian Federal Security Service made an official statement reporting that the terrorist acts organized by Ukraine had been prevented, the terrorists detained, a Russian soldiers had been killed, 10 wounded. Same day Russian President Vladimir Putin has declared “necessary protection measures” would be taken and accused Ukraine in “terrorism”.

On August 11th the Security Council of the Russian Federation has discussed scenarios for “anti-terrorist security” around Crimea. The Ukrainian authorities reacted accusing Russia in provocations and denied any military action in Crimea. The Ukrainian President Petro Poroshenko has ordered the state of military alert at the administrative border with Crimea and non-government controlled areas of eastern Ukraine. Ukrainian intelligence reported on firearms clashes on the border to Crimea, saying it were (obviously unintended) clashes between Russian troops and Russian border service. According to photos, published by witnesses in social networks, Russian troops continued to arrive to Crimea.

What are other versions of the incidents?
As Russian security service FSB has demonstrated videos of captured “Ukrainian elite soldiers”, many questions arise regarding these reports. The main suspect and according to FSB a chief of the “terrorist group” is Evgeniy Panov, a resident of Energodar, Zaporizzha region (230km northeastern from Crimea, Ukrainian mainland). He is an ex-soldier of Ukrainian army (demobilized on August 2015), a head of a charitable foundation assisting Ukrainian ex-soldiers. He has no reported connection to Crimea. According to his relatives, Evgeniy was kidnapped and transported to Crimea three days ago. A video of his interrogation looks like he was under massive pressure.
A video story release by state Russian TV and based on a video provided by FSB, includes a picture of a full moon, which could not be observed on the day of clashes, as they were named by FSB.

Moreover, even before the FSB reported on gunfire clash with “Ukrainian soldiers”, rumors appeared in Crimean social networks about incidents at the administrative border and Armiansk (northern Crimea) due to a group of deserters from the Russian army. As Ukrainian intelligence reported to president Poroshenko on Friday, August 12th, a border gunfire accident has taken place between Russian soldiers – what suites to this version.

What is the situation at the administrative border?
From August 6 to August 10 one checkpoint (out of three) has functioned for crossing from Crimea to the mainland of Ukraine. These days crossing the administrative border to the mainland took 20-24 hours, and crossing the border to Crimea took 8-10 hours. The Russian border police took special control measures to men, screening and gathering personal data. Since early morning of August 10 all three checkpoints started to function in normal mode, the queues has significantly decreased. Still, additional internal checkpoints has been organized at the main roads within the peninsula, the military in Sevastopol and Simferopol has increased in numbers, patrolling the cities.

What does that situation mean for Crimean residents?
During the last week the security measures within the peninsula has significantly increased: there are newly-created Russian checkpoints within the peninsula, massive checks and searches of the Crimean residents together with blockade of Internet connection and access to the Ukrainian media take place. Internet access was blocked in the northern part of Crimea. At least eight suspected “terrorists” were detained, one of them is a Ukrainian citizen, seven persons are residents of Crimea. The new wave of repressions and persecution of the Crimean Tatars and pro-Ukrainian citizens is to be expected.

You can download this article as PDF. Here you find the first FAQ from August 11th.

A new attempt to resolve the Ukraine conflict

The Minsk agreement has come to a standstill. From Ukraine can't accept bogus elections in Donbass and grant autonony to puppet republics while Russia simultaneously expand its power in the region.
By Ralf Fücks and Marieluise Beck 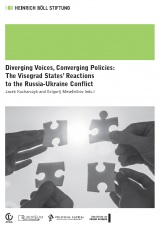 The annexation of Crimea in March 2014 and the launch of a hybrid war against Ukraine was Russia’s answer to the revolution triggered by Euromaidan. In order to explain the differing reactions of individual Visegrad countries, the offices of the Heinrich-Böll-Stiftung in Prague and Warsaw asked their partner organisations to systematically analyse how these countries have dealt with the Russia-Ukraine conflict.

Conference documentation: Europe one year after the annexation of Crimea

At the beginning of March, international experts discussed at the Heinrich-Böll-Foundation in Berlin Europe’s response to Russia’s intervention in Ukraine. They all agreed on Europe lacking a long-term strategy.