Despite the Thai government’s ban of four more types of single-use plastics in 2022, up to 250,000 tonnes of imported plastic waste from other nations continues to flow into the country annually through the international plastic waste trade. Thailand is trying to stay the course with further efforts to mitigate plastic pollution, but there are still challenges in waste sorting and collection on the ground.

After the death of a young dugong named Mariam, a social media sweetheart, in August 2019 from ingesting plastic waste, the problem of plastic pollution quickly became a major issue of concern in Thailand at that time.

With the public on high alert about plastic waste problems, the Ministry of Natural Resources and Environment outlined intentions to tackle this chronic environmental problem by announcing the year 2020 to be the year of pollution control and kicking off a plastic bag usage reduction campaign. The goal was to lower plastic waste generation by 30% by the end of 2020.

Concurrently in 2019, the Thai Cabinet also approved the Roadmap on Plastic Waste Management for the period 2020 to 2030 as the policy framework for related agencies to work on in pursuit of the targets. This includes a ban on seven types of single-use plastics and to completely recycle domestic plastic waste within the designated time frames in the roadmap. Easiest to accomplish, the goal to ban three types of single-use plastics – plastic bottle cap seals, oxo-degradable plastics, and plastic microbeads – by the end of 2019 have already been achieved.

But since the COVID-19 pandemic hit Thailand in 2020, the momentum to tackle plastic pollution has diminished, as the Pollution Control Department found that the coronavirus outbreak has led to a higher amount of plastic waste generation of up to 40% compared to the period before the pandemic. Nevertheless, Director General Athapol Charoenshunsa ensured that the good work on the plastic waste management roadmap will not be put off, especially when the country is going to reach another major milestone for banning four more types of single-use plastics next year.

As the deadline for the total banning of the use of plastic bags thinner than 36 microns, Styrofoam food containers, plastic glasses thinner than 100 microns, and plastic straws is approaching, Pollution Control Department Director General Athapol said the authorities are ready to implement the ban of these four types of single-use plastics within next year.

“We are certain that the implementation on the plastic waste management roadmap will go on as planned, even though we have the COVID-19 pandemic to contend with,” he assured. “There were already many talks with all related agencies and business partners to find the most suitable action plan for banning these four types of single-use plastics in order to smoothly implement the ban without causing too much impact to any of the stakeholders.”

will go on as planned, even though we have the COVID-19 pandemic to contend with.

However, he admitted that the issuance of a new regulation under the Factory Act 2019 to enforce the ban on these four single-use plastics will be trickier to pass, because it may encounter opposition from the business sector during the public hearing process since some of them expressed their concern that the ban will negatively affect their business. “Apart from this legal challenge, we are also launching the policy to encourage the plastic producers to switch their production lines from non-recyclable single-use plastics to produce degradable and recyclable types of plastic instead,” he said.

“The Pollution Control Department (PCD) has already discussed with the Ministry of Interior, which is the one in charge of collecting and managing municipal waste and plastic waste, to improve the country’s plastic waste recycling capacity and impose stricter measures on waste sorting to ensure that household plastic waste will be properly sorted and recycled,” he said. “PCD also already drafted the new regulation for improving waste sorting and recycling, but up until now the enforcement of this regulation has been postponed due to the pandemic.”

Nonetheless, he highlighted that in order to successfully achieve the goal of 100% plastic waste recycling, it is up to all of us to familiarize ourselves with the new stricter waste sorting rules, as when people appropriately sort out recyclable plastic waste, it will greatly enhance the country’s plastic waste management efficiency. 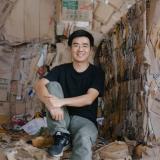 Furthermore, Prem said this ban may also encourage the use of thicker types of plastic, which have more trade value and are easier to recycle. However, he commented that he did not think that the plastic waste problems can easily be solved by just banning single-use plastics, as many more measures are required to reform the entire plastic supply chain from the producers to consumers and to the recyclers.

On the business sector side, the plastic producers should also come out with the products that can be recycled easily in order to further encourage plastic waste sorting and recycling

As for the country’s goal to recycle 100% of plastic waste, he agreed that the stronger measures to promote proper plastic waste sorting on the consumer side are greatly needed, while the authorities must also improve the waste collection system to make sure that the well-sorted waste will be accurately dealt with according to its type. “On the business sector side, the plastic producers should also come out with the products that can be recycled easily in order to further encourage plastic waste sorting and recycling,” he added.

As a business operator in plastic waste collection, Prem says that the government has a relatively good roadmap and action plans to better manage and recycle domestic plastic waste. But he noted that all of these good works could easily be undone by the incoming wave of imported plastic waste from outside the country, as the government still allows the import of cheap plastic scraps to be recycled in Thailand.

“The plastic waste import is very damaging to the domestic plastic waste market and harming plastic waste collector businesses, as it causes the price for recyclable plastic to sharply plummet, which leads to the collapsing of local recycling businesses,” he said. “It makes completely no sense that while our country is still struggling to tackle plastic pollution, the government allows more plastic waste from wealthy and more developed nations to be imported into the country.”

Yet, the imported plastic waste continued to flow into the country in the following years and beyond this deadline, as the Customs Department’s statistics showed that from 2017 to 2020, the total amount of imported plastic waste reached more than 1 million tonnes, while during the first five months of 2021, over 58,000 tonnes of plastic waste were shipped to Thailand.

This continuation of plastic waste trade into Thailand was a result of the policy revision by the subcommittee to extend the original deadline by slowly reducing the amount of plastic waste imports by 20% every year until completely banned in 2026, as it cited the reason that the country’s plastic recycling industry still requires up to 685,190 tonnes of imported plastic scraps annually. Due to this, environmental activists and local plastic waste collector businesses have once again staged a campaign to immediately put an end to plastic waste imports within this year.

“There are a lot of myths that we have to import cleaned plastic waste from other countries, because plastic waste in Thailand is insufficient and too poor quality to be recycled. All of these myths are not true,” Penchom said. “Moreover, the plastic recycling industry is a very polluted industry, so importing plastic waste from other countries to recycle in Thailand is similar to allowing others to litter in our home. It is also against the principle that waste should be managed at the place of their origin.”

There are a lot of myths that we have to import cleaned plastic waste from other countries, because plastic waste in Thailand is insufficient and too poor quality to be recycled.

All of these myths are not true.

She insisted that the amount of domestic plastic waste is more than enough for the recycling industry, but currently our waste sorting and waste collection system is still not good enough to properly sort out recyclable plastic waste for further management.

According to the Pollution Control Department, about 2 million tonnes of plastic waste were generated every year in Thailand over the past decade, but only a quarter of this amount (around 500,000 tonnes) was properly retrieved and recycled. Meanwhile, the Ministry of Industry revealed that the demand for recyclable plastic waste of the recycling industry this year was 680,000 tonnes.

Furthermore, Penchom pointed out that the imported plastic waste is also not entirely clean, as dirty plastic waste and other hazardous waste were found mingled in many plastic waste cargo, causing environmental problems to the country.

She emphasized that the most crucial thing that the government must do is to extensively promote waste sorting within households and improve the waste collection system to more efficiently separate recyclable plastic waste from non-recyclable waste. They also need to adapt the extended producer responsibility principle to include plastic producers into the waste management system, she said. “Without the proper waste sorting and collection system, the dream for eradicating plastic pollution and the circular economy will never become true.”

The views expressed by the author are not necessarily those of Heinrich Böll Stiftung.

Dossier
The Plastic Atlas - find all infographics, videos and selected contributions in our online dossier.

Perspectives Asia is a publication series jointly produced by the offices of the Heinrich-Böll-Stiftung in Asia. With this series, we intend to provide a German and European readership with an understanding of Asian perspectives, as well as an analysis of global trends and greater insights into developments and current political issues across the Asian region.

Community-based organizations and grassroots-led initiatives across Asia are addressing the growing threat of plastics pollution. Governments must now enact and properly implement policies and regulations to scale up these bottom-up efforts and hold plastics producers accountable.
By Jed Alegado, Clemens Kunze and Kevin Li