Our annual reports provide a comprehensive insight into the Foundation's work at home and abroad. They can be downloaded as PDF files and all newer annual reports can be ordered via our Bookshop. 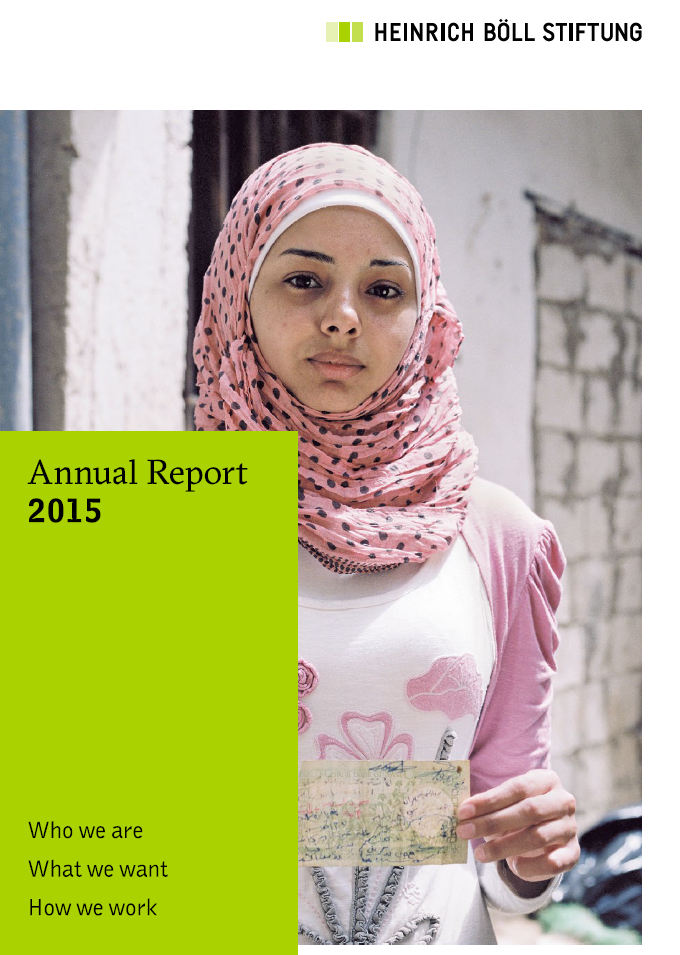 The annual report 2015 of the Heinrich Böll Foundation offers an overview about the work in that year of the 31 international offices worldwide and 16 state-level Böll Foundations in Germany. 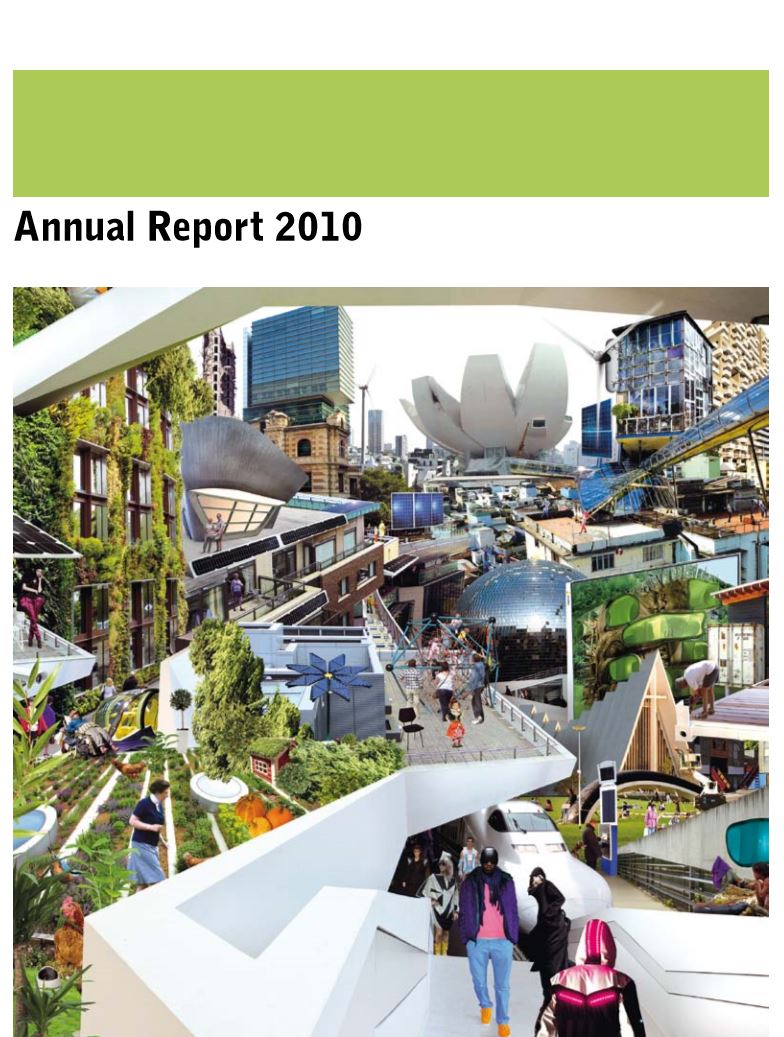 In recent months, a number of rapid and dramatic developments have unfolded that demand our attention. The most prominent of these include the tsunami and the ensuing nuclear reactor crisis in Japan, political upheavals in North Africa and the Middle East, and most recently the Green Party‘s swift rise in popularity in Ger many, which led to the election of Germany‘s first Green Minister President at the federal state level – namely in the state of Baden-Württemberg. 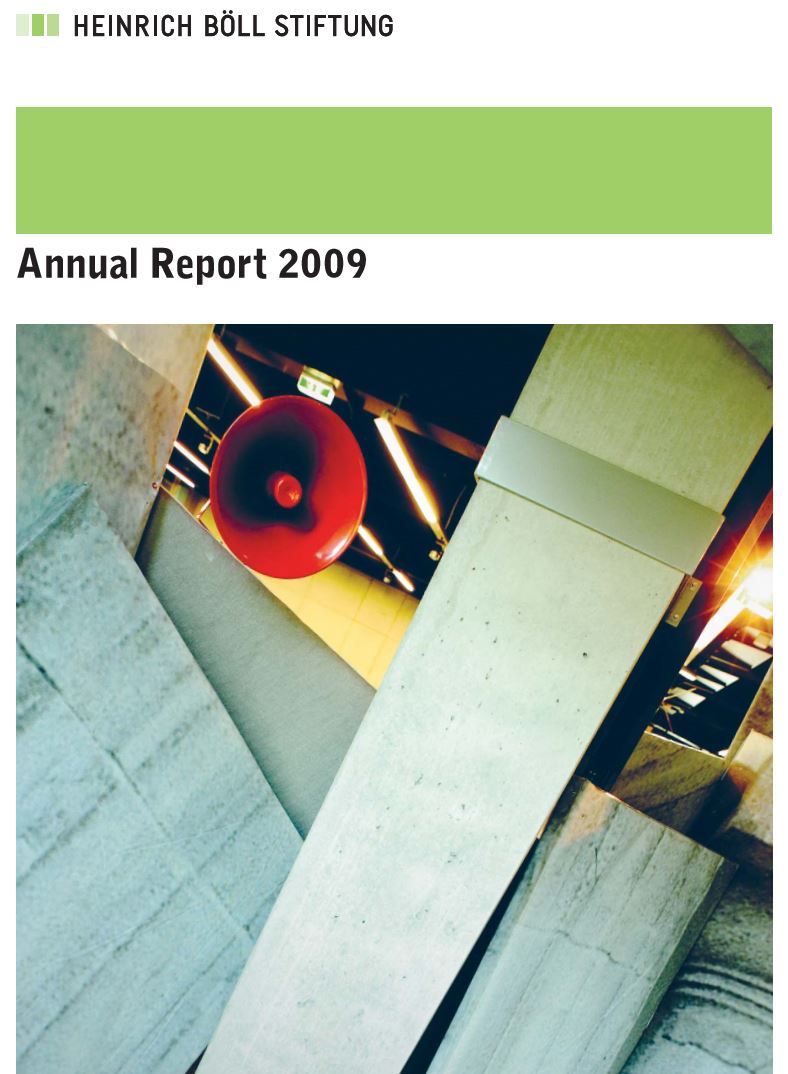 Climate change, the global food crisis, and poverty continue to pose enormous challenges to international politics. While the global ﬁ nancial crisis has had an impact on every country in the world, it has wiped out progress toward development particularly in the poorest countries. 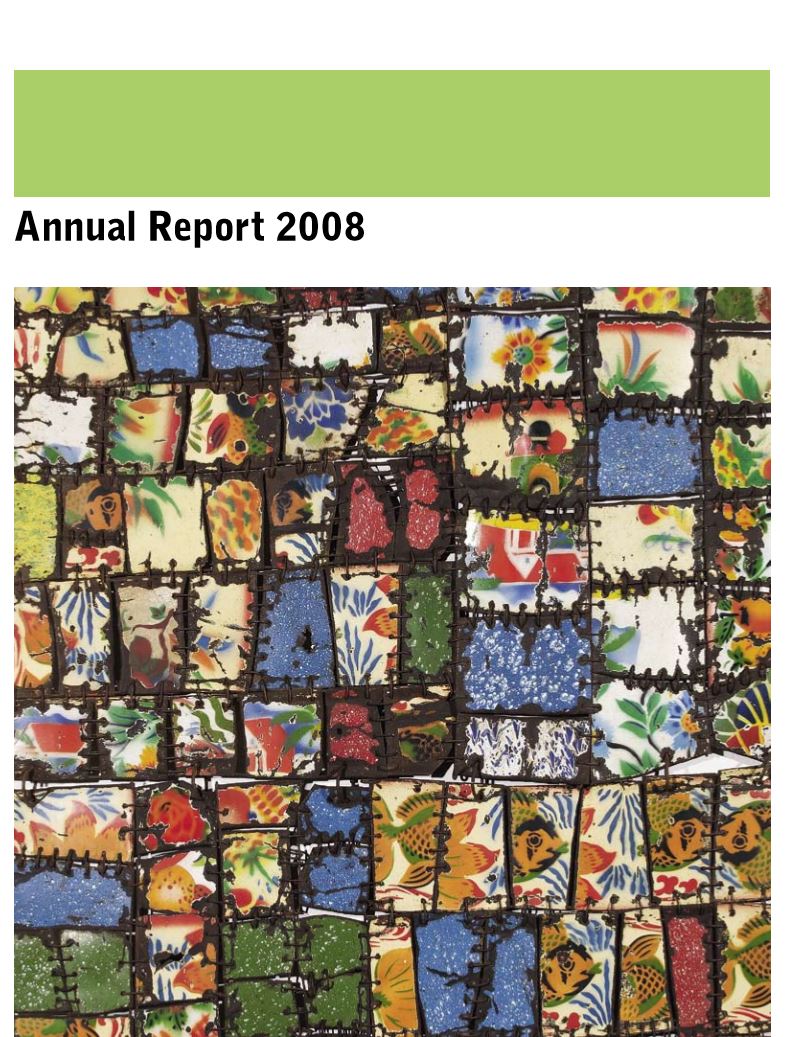 We are living in extraordinary times! Human-induced climate change is taking place at an unprecedented scale, and the world is caught up in a financial and economic crisis of historic proportions. We can overcome these crises only by undertaking major, joint international efforts. 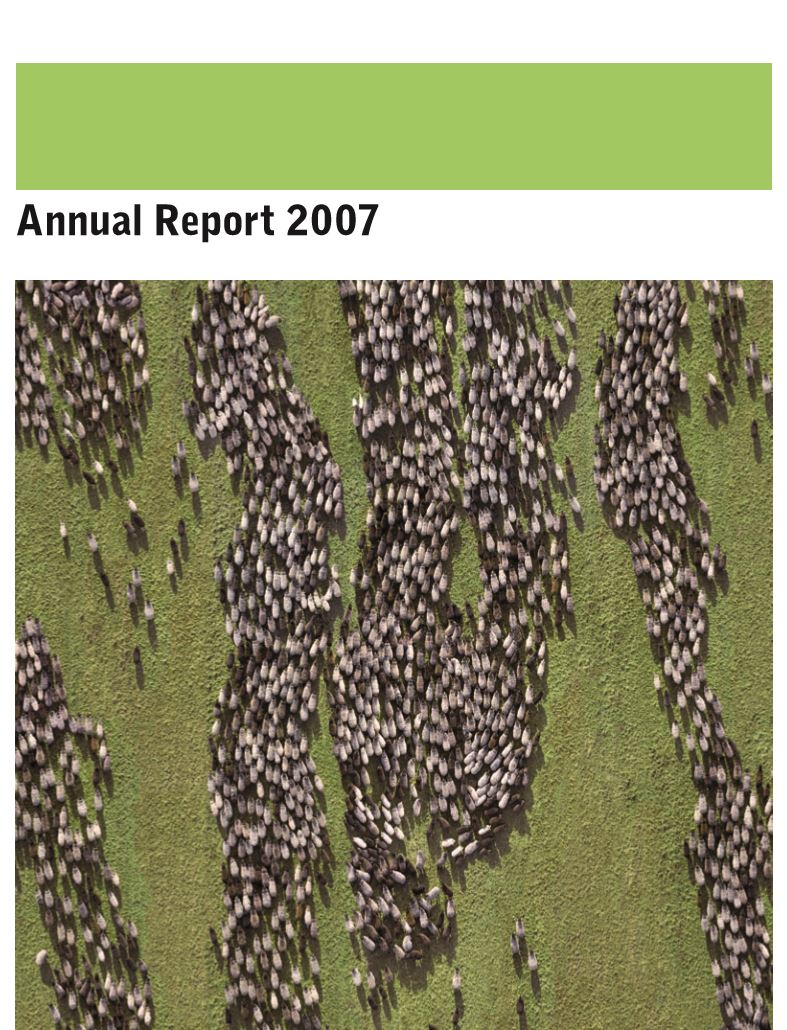 In June 2008, the Heinrich Böll Foundation moved into its new home on Schumannstrasse 8 in Berlin’s Mitte district. The new building, based on designs by the Swiss architectural firm e2A, offers the Foundation’s approximately 180 employees a bright new working environment. 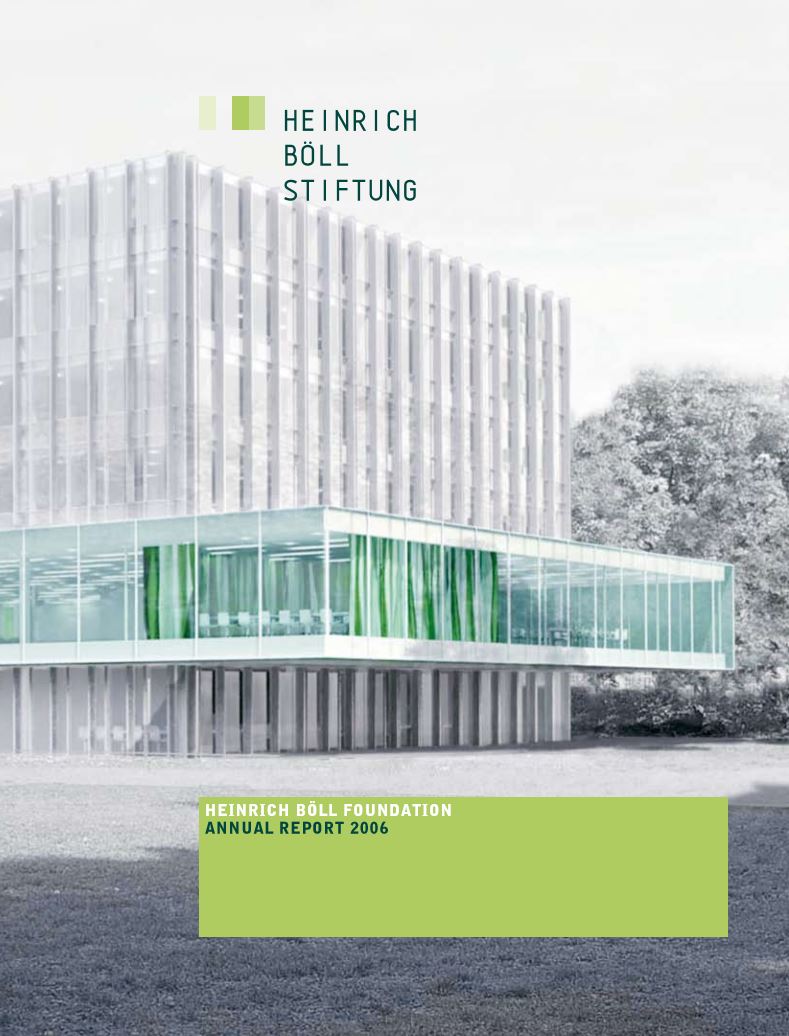 Climate change is upon us – it is not only a measurable phenomenon in our natural environment, but has also ascended to the top of the political agenda . Our goal is to ensure that declarations of intent and resolutions are followed by genuine shifts in priorities and behavior, particularly in the field of energy policy . 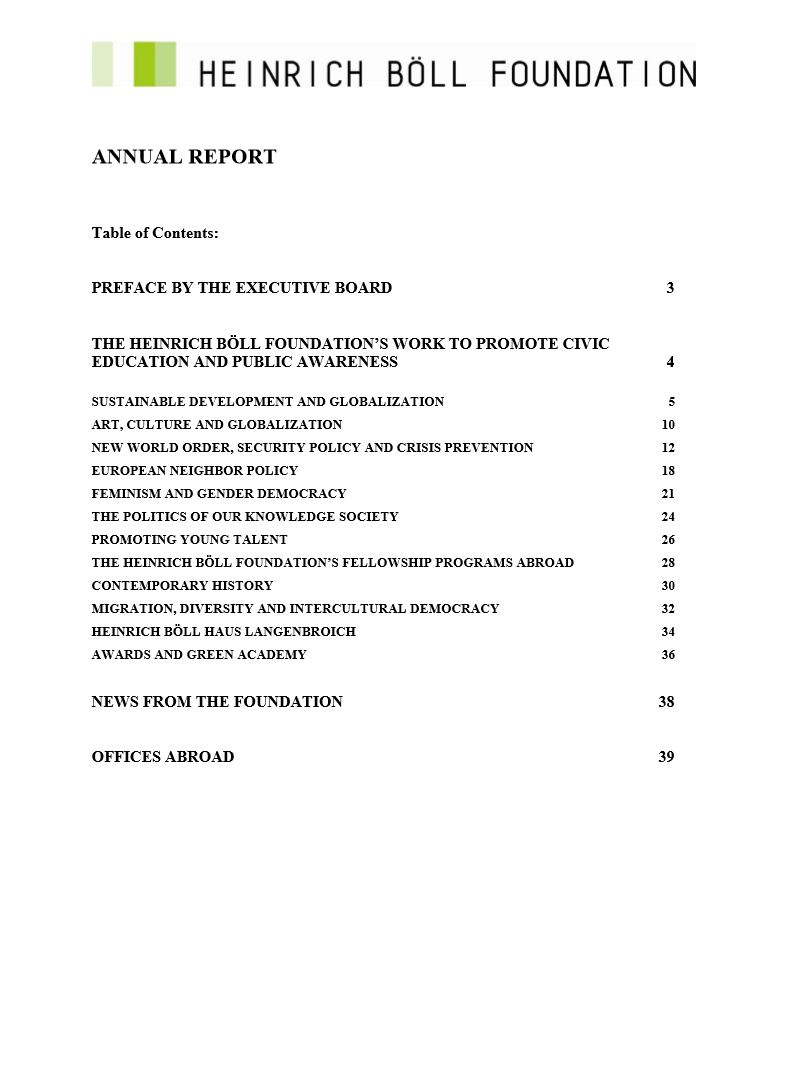 In the past decades, German society has become ethnically, religiously and culturally diverse. Germany has in fact long since become an immigration society; but we are still lagging behind that reality in the public consciousness and in integrating immigrants via the educational system and the labor market. 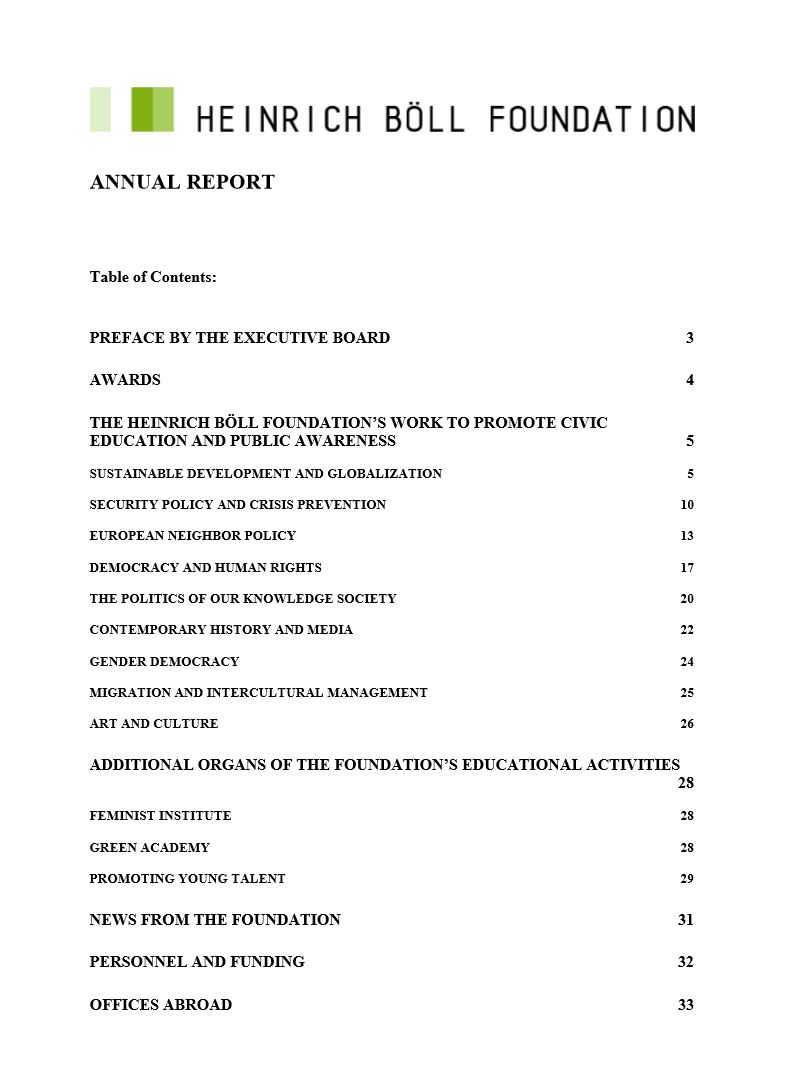 On Human Rights Day, December 10, 2004, Wangari Maathai, recipient of the Petra Kelly Prize and longtime project partner of the Heinrich Böll Foundation, was awarded the Nobel Peace Prize in Oslo. 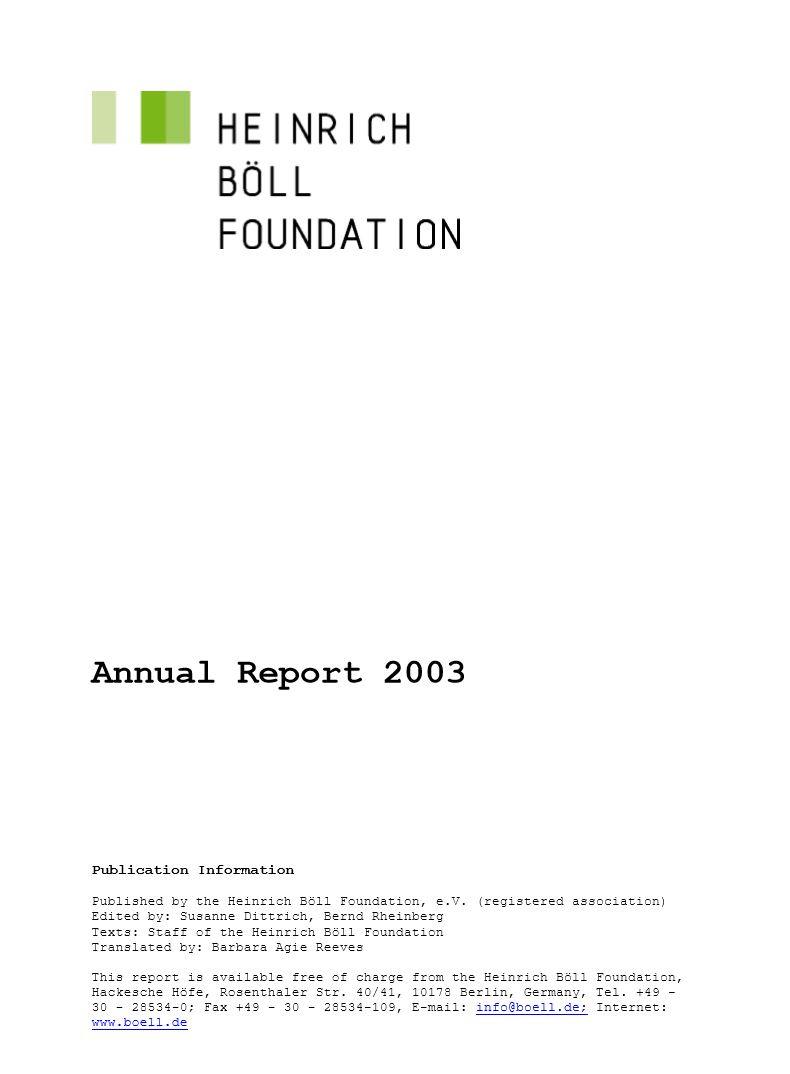 The Heinrich Böll Foundation’s activities strive to meet the new challenges arising from the sweeping changes in global economic, social and security policy. For example, the agenda on foreign and security policy is in a phase of profound transformation; this was further accelerated by 9/11 and the political turmoil due to the wars in Afghanistan and Iraq. 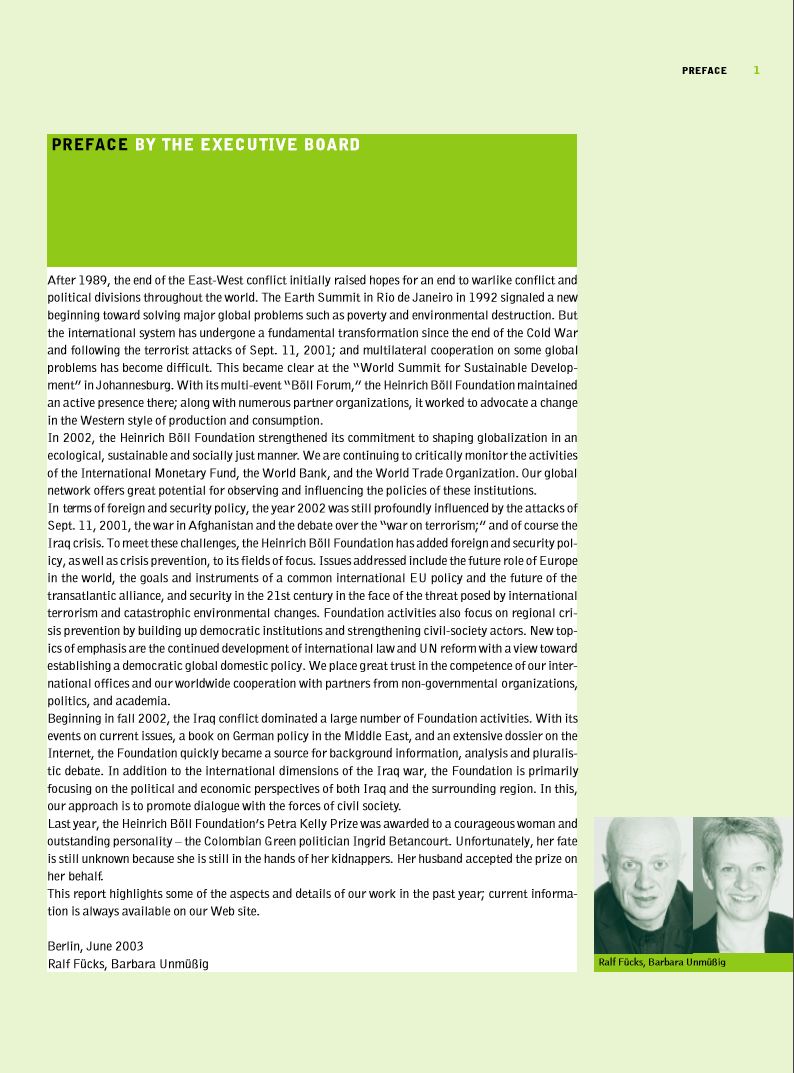 After 1989, the end of the East-West conflict initially raised hopes for an end to warlike conflict and political divisions throughout the world. 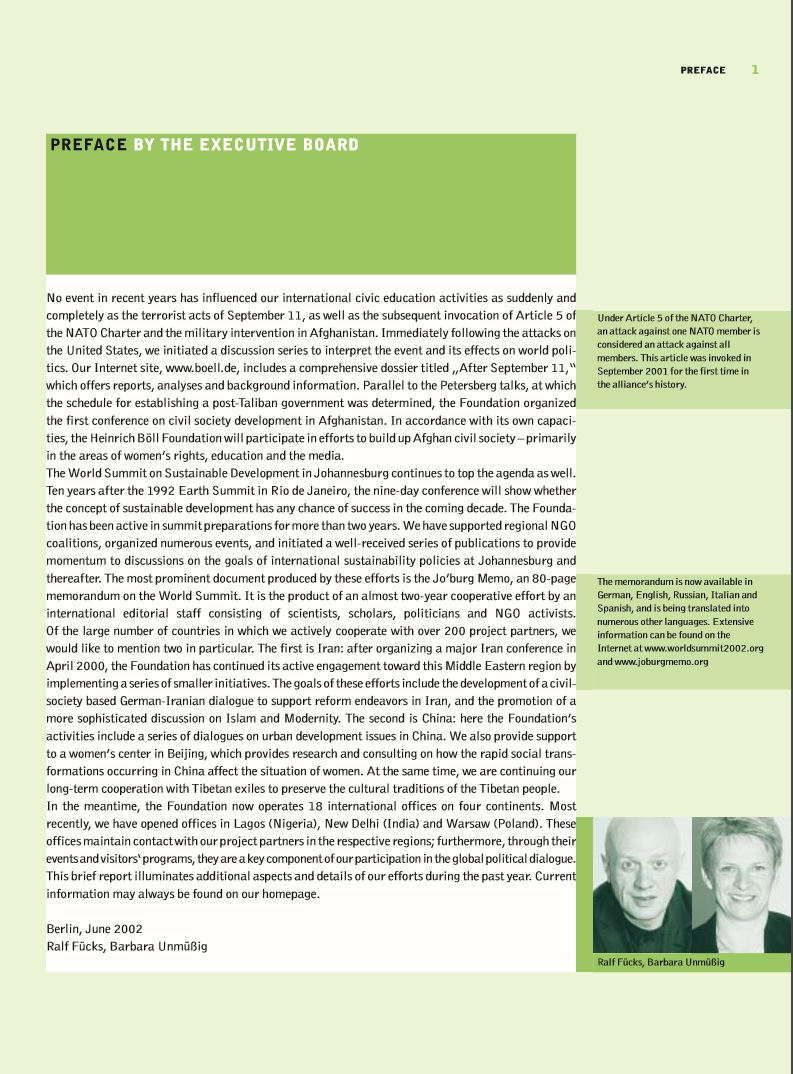 No event in recent years has influenced our international civic education activities as suddenly and completely as the terrorist acts of September 11, as well as the subsequent invocation of Article 5 of the NATO Charter and the military intervention in Afghanistan. 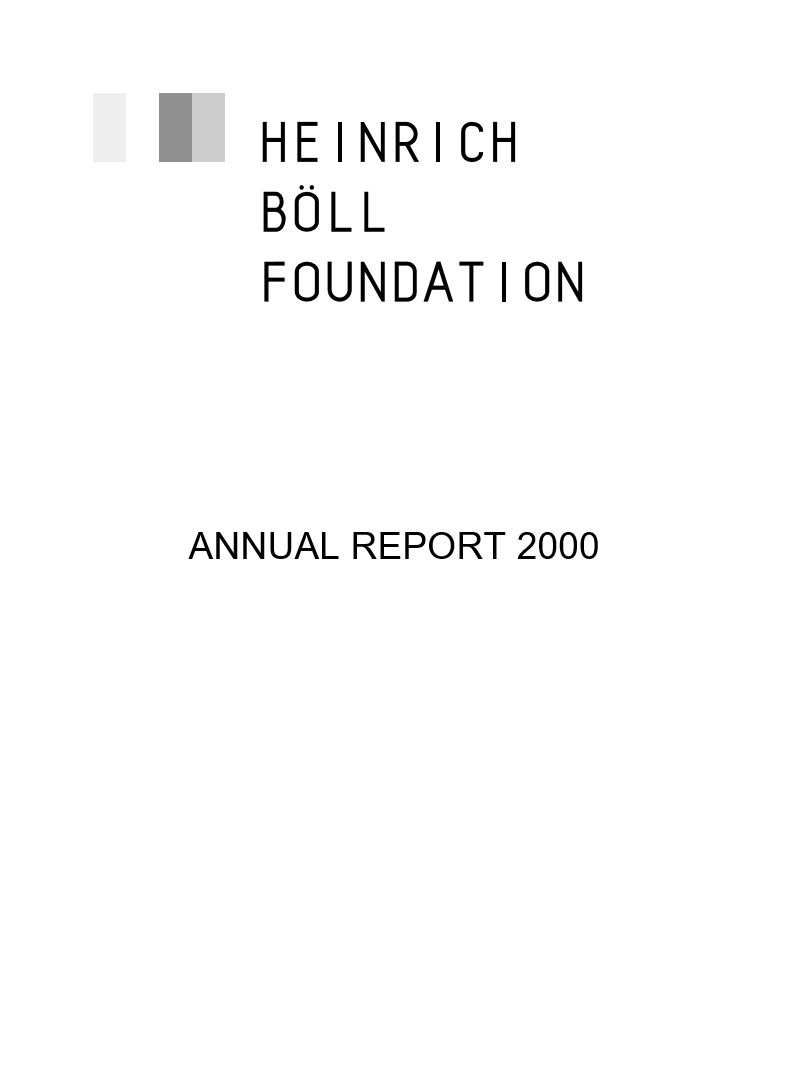 This report is designed to provide a brief overview of our work during the year 2000, thus satisfying the increasing demand for information on the Foundation’s activities abroad.