Teaser Image Caption
63 percent of global carbon emissions can be traced back to the 90 biggest oil, gas and coal producers, and cement manufacturers

Fossil fuel producers (the “Carbon Majors”) should pay for the loss and damage their product is causing on poor communities via a levy to the International Mechanism for Loss and Damage.

Billions of people in poor communities are innocent victims in the climate change equation. They pollute the least, yet they are already suffering from loss and damage caused by climate change through impacts such as:

These impacts have already gone beyond the ability of communities to adapt. It is expected that loss and damage from climate change will increase dramatically in the poorest parts of the world.

63 percent of global carbon emissions can be traced back to the 90 biggest oil, gas and coal producers, and cement manufacturers – the “Carbon Majors”.  These entities include Chevron, ExxonMobil, Saudi Aramco, BP, Gazprom, and Shell.

The Carbon Majors have made massive profits from extracting and selling the fossil fuels that cause climate change without paying for the damage from climate change that their products are causing. In the decade to 2012, the top five oil and gas companies alone made more than one trillion US-Dollar in profits.

To safeguard the climate we must phase out fossil fuels by mid-century. The Carbon Majors have a moral and legal responsibility to pay for the loss and damage caused by the emissions traced back to them. Adding a levy to the extraction of fossil fuels can help meet these goals. 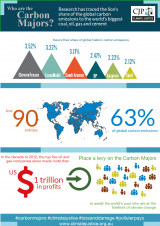 The International Mechanism for Loss and Damage has been agreed and discussions on how it will work are happening.  But the current level of climate finance under discussion by the international community is already grossly inadequate for mitigation and adaptation efforts - without taking loss and damage into consideration.

This approach is based on the “no harm” principle in international law and the principles of transboundary harm. It is consistent with the UNFCCC and is informed by precedents from other fields developed in line with the Rio Declaration on Environment and Development (1992), including the oil spill compensation regime, the nuclear damage regime, and the biosafety regime.

We propose that the Carbon Majors pay a levy – based on their emissions to date and on future extraction of fossil fuels – to the international Loss and Damage Mechanism.

This funding would be used to assist the poorest and most vulnerable communities suffering the worst impacts of climate change. This levy on the Carbon Majors needs to be part of a general phase-out of fossil fuels.

If you wish to engage with this idea, please contact us via this short form: http://goo.gl/7Dbdfs.

Only 90 companies worldwide are responsible for 63 percent of carbon emissions in the atmosphere since the Industrial Revolution. These climate offenders must be held accountable for their role in global warming, according to the "Carbon Majors Funding Loss and Damage" report, published today by the Heinrich Böll Foundation and the Climate Justice Programme.