Deep inside she bleeds

How do you handle such pain? Zandile, a young woman from Capetown, was raped because she is lesbian. Warning for a graphic depiction of sexual violence

Though it happened years ago, I can’t seem to find peace.

It’s one of those things that ‘we’ are prepared for yet will never get over. You spend your whole life knowing that someday it might happen, but when it happens, your whole life crashes into pieces. It happened to me and passed, but it’s like a broken mirror, you can put the pieces together but you’ll still see the cracks.

I still remember the feeling that surged through every atom of my body. It was a hypnotizing combination of contradictory emotions that sent adrenaline pumping through my veins as he touched me. His red swollen eyes full of hatred alerting each and every nerve in my body. The look in his eyes as he made grunting noises while holding my wrists tightly, making sure that I would not get away. I glanced around trying to find courage, strength or even hope to set me free. Powerless I managed to smile trying to hide the fear in my eyes as I longed for someone to rescue me. My eyes slowly drew closed hoping for the best when I knew that it was not going to come. How could anyone forget the day they got into a spiralling roller-coaster to rock bottom?

It was the beginning of my forever living nightmare. My biggest fear came to life when he ripped off my underwear and whispered in my ear, "I have a surprise for you. After today you won’t be so confused. Ndibuyisa indebe endala. No more Mandela child, no more democracy. It’s just going to be me and you, Adam and Eve."

At that point all I could think of was to fight, but then he was a man. He was physically much stronger than me. Ingqondo yam yayithatha ibeka while my heart was racing because now it was all going wrong and no stopping. He forcefully licked my neck while he stuck his fingers inside me. I could feel them as he forced them in and out, scratching my vaginal walls. Minutes later it was his dick. The feeling of his hard stick sliding into me, tearing me apart. Zivakele izingqi zovalo lwam zifuna ukukrazula isifuba. Salandela isikhalo sentlungu yam sisihla ngomcancatho as it moved in and out. Ndandikhala, nditabalaza hoping that he would stop but no... he did not. As I was starting to sink into the pain, all of a sudden he was holding me tight, pushing very hard. I screamed as an excruciating pain seared through my abdomen. He kept on pushing, pushing very hard. I kept scratching his back battling to get him off me. Then it was over. He lay on top of me. I could feel his warm heavy breath in my neck and even tasted his salty sweat while his distinct smell tormented my nostrils. He looked up and gave me a peck on the cheek. Then he stood up.

How could he mutilate my self-esteem, my ego and integrity, my confidence. It took him split seconds to destroy what it took me years to build. I could feel tears running down my cheeks, itching in my neck and leaving a salty taste in my mouth. My body ached as my ‘purity’ and ‘innocence’ was all gone. He killed me. Disgusted, ashamed and angry I tried speaking but could not say a thing. I thought of Asi, Andy and Luleka - all lesbians who had been raped in the past. What was I going to do? I called upon the Almighty to intervene as I sank into my deepest despair. Anguish and turbulence coursed through my frustrations, sorrow and pain.

The next thing I knew, blood was rolling down my thighs, oozing onto the cotton sheets and painting them a deep red. As the towel slipped from my shaking hands, I glanced at the mirror hanging on the wall next to me. I had no recognition of the ‘innocence’ and ‘purity’. He summoned me to hurry up and clean myself as it was getting late and we still needed to talk. It was then that I realized he had no idea of what he had done to me.

"Look Joe, this was no rape. I actually did you a favour. You’ll never be a man so please stop the act and go home and embrace your womanhood". I couldn’t believe the nerve of this guy. How could he be so cold? Didn’t he realise what he had done to me? But then, this was neither the time nor the place so I hade to move. I had to go home and maybe only then I would realise that it was all just a nightmare.

"Hey wena where have you been? Mxm. Your food is in the oven", said my mom as I walked in. I did not have the energy for her so I just went straight to the kitchen to put the kettle on so that I could take a bath. As I was washing, I kept on scrubbing, hard, trying to get rid of anything that would remind me of that moment. Tears were rolling down endlessly while I longed for someone to walk in and ask if I was okay. How could my life, my whole life shatter in just minutes? Snap images of the rape kept on appearing, devastating me even further. I kept on scrubbing very hard till I thought of something that was my father in need which made him my friend in deed. While drying up I was listening to Michael Jackson’s Will You be There? trying to avoid the temptation of consulting my ‘friend’.

As I was sleeping my screams and hurt tormented my fragile soul and so I needed to do something to still feel alive. “I don’t want to kill myself, just to feel alive again” I murmured to myself while grabbing a packet of Minora Blades. I felt alive as soon as a platinum blade touched my skin. It was like I was on fire, but, that was the problem. I never realised that I was burning till the damage was done.

Each day, I watched myself drift away from being the Zandile they know. The vibrant young woman full of ambition who used to consult her diary in times of sorrow turned into a victim and also a self-abuser. I grew bitter each time when the thought of being raped by no stranger crossed my mind. I became an addict hooked on self-mutilation, no different from a heroin junkie. I fell into the game of not wanting to get intimate with my partner as I did not want a reminder of that violation.

Each day I was thankful for the Minora blades that lured and led me to a new world free of pain, suffering and problems. They were my gateway of escape from my broken world. With them, I redeemed myself as I found salvation. I began shutting out those who claimed to love and care for me, as all love and care I needed was provided by Minora. Day by day I sold my soul to the devil and there was no stopping. My world shrank until I felt all alone and empty amidst the billions of other people in the world beside me. I got trapped into a world of living on the edge as I tattooed my own body. My whole life turned into an enigma and I could touch death’s hand with the thought, "To be or not to be …" Though my body was full of scars, their depth and pain could not compare with the wounds in my heart.

To this day, I still find it hard to accept that it was my friend’s eldest brother that did that to me. I fail to think of a reason to justify the engraved memories on my body: What happened that day, how did it happen and how was I supposed to deal with it. I came across so many explanations, “Rape is something huge and one can never accept it”, says Alice of SARC in an article. But what about self-mutilation? Each day went by with me walking with my head held high while I bottled up my emotions. I guess my yearning was not as evident as I thought, because no one noticed till I spoke up three years later when I was diagnosed with the HI virus.

I was slowly dying, yet stuck out my chin and grinned. I suffered, came to the point of having enough, but I guess I indulged in Misery, because as the famous saying goes “Misery likes company”. I kept it all to myself because I believed that to the people, even my friends and family, I was just another lesbian statistic. That thought I could not handle, because it felt as if a piece of my heart had been buried. No one would understand how it feels to wear a mask and push down all your feelings as if they never existed.

With every scar in my heart burning when I saw him, I turned into a piece of flesh with no face and no heart. I couldn’t feel anything any longer, and only bitter memories I held close. No one can understand what it feels like to be branded as a ‘lesbian rape victim’ unless you have stumbled onto that path.

When I got sick with the virus and could hide it no longer, I finally discovered that there is no detour between success and failure. Failure is only an obstacle everybody faces in order to grow and achieve success. When the love of my life Samkelisiwe said to me "In the end, who you are is down to you—you are in your own hands", I realised that I was the captain of my ship. It was up to me to live like the typical lesbian rape victim or like a rape victim. I had to move from carrying the stigma as a lesbian into carrying it as a girl.

Although people now know, it still feels like yesterday when he tore me apart. I have not healed nor accepted it but each time someone touches me, my wounds bleed and I crave for that Minora comfort. Yet, I refuse to take a trip back down that lane of three years ago. In case you are wondering how old I am, I am only 18 years old now. And yes, it happened when I was 15. So to all those like me, don’t mope around as a lesbian because there is more to you than just being a lesbian.

This text was published in "Rivers of Life. Lesbian Stories and Poems", Südafrika 2013. 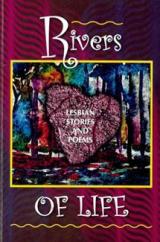 A group of lesbians and trans*people from the townships of Capetown took workshops of the Heinrich Boell Foundation in cooperation with Free Gender. They learned to write stories about their lives. "Rivers of Live" is a collecetion of their best stories and poems.
Assets
cover_rivers_of_life.jpg
Tags
Africa
Gender Policy LGBTI
This post is licensed under:
All rights reserved