History: The bedrock of industry

Coal is the fuel that powered the Industrial Revolution and the transformation of economies and societies over the last two centuries. Its benefits have been huge – while the damage it has wrought was ignored for too long. A switch to cleaner fuels now heralds the end of the coal era. A chapter from the Coal Atlas.

Hardly any shift in human history has changed society as much as the Industrial Revolution. Coal was the fuel that powered this economic and social upheaval. The Romans mined coal in Britain, and the Chinese used it as a source of energy in the 13th century. In the Ruhr area of Germany we have evidence of deliveries of coal to blacksmiths in the 14th century. But for the most part, humanity relied rather on biomass, mostly wood. In the pre-industrial era, huge areas of forest were cut down to smelt iron and steel. But then in the 17th century, Great Britain, the home of the Industrial Revolution, discovered a cheap and energy-rich alternative fuel in the form of coal.

Burning coal made iron production so cheap that machines and factories could be built on a larger scale. The steam pump, invented in 1705, made it possible to pump water out of ever-deeper mines. The Scottish instrument-maker, James Watt, improved the early pump designs, and in 1774 opened the world’s first factory to make steam engines. His coal-powered engines were a huge success, and they began to replace human and animal muscle power in ever more tasks. Entirely new types of production emerged. At the same time, railways and steamships started to play an increasing role. As the costs of production sank and factories multiplied, the way was open for the mass production of goods.

In the 19th century, industrialization took hold in other countries. On the European continent, where coal, wood and animal power had long been used alongside each other, the use of coal grew in the Prussian coal basins in the Ruhr, Silesia and the Saarland. From the middle of the century, German heavy industry took shape, creating an economic and technological complex based initially on coal, iron and steel, railways and machinery, with chemicals added later to the mix. Coal production in Silesia expanded markedly in the 19th century, making it one of Europe’s leading industrial centres and spearheading the industrialization of Poland. As iron and steel production developed further, mines and steelworks were established, new cities sprang up, and railways spread across the land. Between 1850 and 1874, the coal output in Upper Silesia rose from 975,000 to 8.2 million tonnes. In what is now the Czech Republic, coal mining grew considerably too, and along with the spread of steam power, led to the transition from crafts to industrial manufacturing.

The new forms of industrial production changed the entire structure of society. First in Britain and then in much of Central Europe and the United States, an industrial proletariat emerged in the rapidly growing cities. The impoverished working class often lived and worked in appalling conditions. Mine workers formed unions to fight against the harsh and dangerous working conditions. In many countries the leaders of socialist or left-leaning political movements emerged from such organizations. Their work underground forged close ties between miners, and coal influenced the culture of whole communities. Today’s witnesses to this include statues to honour miners, guilds and clubs, as well as songs and art created by miners.

In Canada, coal mining began in the late 1830s when a group of English investors obtained a monopoly in the province of Nova Scotia. They imported the latest mining technology, including steam-driven pumps. Coal delivered the energy needed by the growing network of railways and steamships, fuelled steel production and was the source of heating for the burgeoning cities. Output grew from 3 million tonnes in 1890 to 17 million tonnes in 1942.

The economic development of Australia, which started out as a British penal colony in 1788, is closely tied to coal mining. The discovery of gold in the mid-19th century sparked the exploration for raw materials, including coal. A long-time exporter of raw commodities, Australia developed its manufacturing industry mainly after the Second World War. It is now the second-biggest coal exporter in the world, after Indonesia.

Since 2000, coal consumption has declined slightly in the OECD, a club of industrialized countries. But it has risen by 123 percent in non-OECD countries. Most of this increase has been in China, which accounts for half of the worldwide consumption. However, China is no longer pushing for the unrestricted development of coal-fired power stations to quench its thirst for energy.

No such trend can yet be seen in other industrializing countries such as India and Indonesia; their coal consumption has doubled since 2004, or in the case of Indonesia, nearly tripled. Such countries are trying to combat energy shortages by building coal-fired power plants. The economic development of these countries and the consequent rise in energy use rely on producing goods for the rest of the world. If the developed world increases its consumption of goods from these countries, carbon-dioxide emissions there rise. For instance, exports are now responsible for one-third of China’s emissions, most of them from burning coal. The Potsdam Institute for Climate Impact Research calculates that between 1990 and 2008, the production of consumer goods in developing countries has resulted in five times more emissions than the industrialized countries have saved through their climate-change programmes.

South Africa obtains almost 90 percent of its electricity and 77 percent of its primary energy needs from coal. Alongside electricity generation, coal is used as a raw material in the petrochemicals industry. Unique in the world, the Sasol company converts large amounts into liquid fuel, a process that involves substantial energy losses.

Some developing countries have decided to use renewable energy sources rather than fossil fuels, at least for part of their economic development strategy. An example is Morocco, which hopes to use wind and solar energy to reduce its dependence on imported fuels. 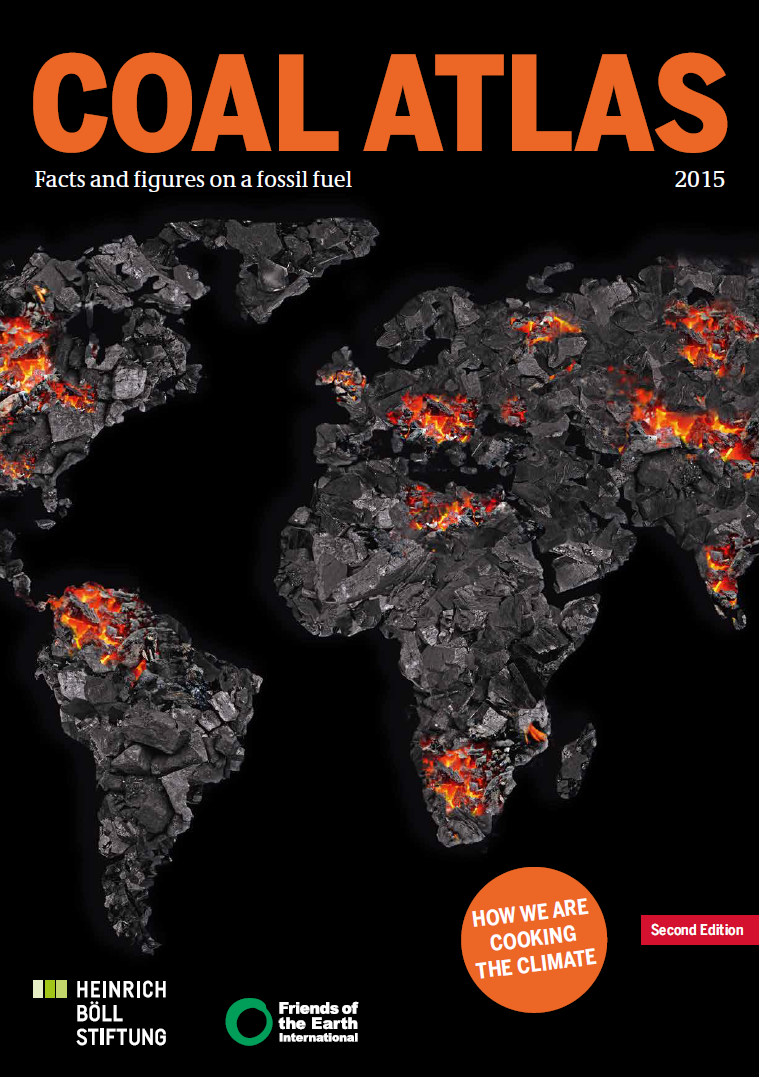 Digging up coal and using it to generate electricity churns out emissions that intensify the greenhouse effect. Coal is one of the biggest sources of climate change. A chapter from the Coal Atlas.
By Eva Mahnke