Fire and Frost: The Virtues of Treating Museums, Libraries and Archives as Commons

Civilization can't affort to lose archives and libraries. Free, unrestricted digital access is the key, and the creativity and action of citizens is what turns it in the lock. From the book "Patterns of Commoning"

It was usually a note in the newspaper, a few pages back. Or, if the blaze was big enough and a camera crew arrived quickly, a feature on the evening news. It seems like house fires were more common when I was young, and the story was often the same: "As they escaped their burning home," the newscaster would say, "they paused to save a single prized possession..." And it was always something sentimental – not jewelry or cash but a family photograph, a child’s drawing, a letter, a lock of hair. Ephemera by any measure, and yet as dear as life itself. Museums are simple places. Libraries and archives too. Collect, preserve, elucidate. Repeat forever. We don’t think about them until the smoke rises, but by then it’s usually too late.

When Hitler ordered the destruction of Warsaw in 1944, the army tried to set the national library – the Biblioteka Narodawa – on fire, but the flames smoldered. It turns out that the collected memory of a civilization is surprisingly dense and hard to burn, so a special engineering team was brought in to cut chimneys in the roof and holes in the walls so the fire could get more air. Problem solved. Museums, libraries and archives are simple places, but once the flames take hold they burn like hell.

Or sometimes they freeze: the icy cold of ignorance and neglect can be as deadly as the hot end of a torch. The last and only specimen of the fruit bat Pteropus allenorum sat preserved in a jar on a museum shelf for 153 years before it was finally studied and identified as a new species – but by then it was extinct.

The Bachman’s warbler, "famous for its unusually thrilling song," was hurtled into extinction in 1939 when bird watchers found and proudly shot the last two of them. A quarter of Americans don’t believe in climate change; almost half don’t believe in evolution; a third don’t know their next-door neighbors, and while the rest of the world clamors for greater access to knowledge and literacy the UK has closed hundreds of community libraries. "Libraries that stayed open during the Blitz will be closed by budgets," wrote Caitlin Moran, "A trillion small doors closing." Lost opportunity kills like smoke and flame, but it’s harder to see.

Fire and frost – ignorance of science, neglect of our physical environment, and failure to cultivate human potential – we can’t afford them anymore: there is too much at stake. Civilization requires wise and engaged citizens, and for hundreds if not thousands of years we have built and sustained museums, libraries and archives in our communities to advance this goal for our own survival – to stimulate knowledge creation and creativity; foster learning and independent thinking; support civic engagement and dialogue; encourage emotional intelligence and well-being; and to deepen our knowledge of the past and clarify our plans for the future. We need museums, libraries and archives to accomplish these tasks on a massive scale – we can’t possibly have too much success in them – but taken as a whole, our institutions, operating in their traditional ways, are a remarkably blunt instrument for spreading the enlightenment. For every person who walks through museum doors there are billions who can’t or won’t; for every item cataloged and available to library and archive patrons, millions are absent or withheld; collections that have been in the public domain for centuries are enclosed by paywalls and unnecessary restrictions; and the expertise and passion of the public lies dormant and invisible. Why?

Old ideas about scope and scale

The issue, it turns out, is not a conflict of values but of habits: old ideas about scope and scale – who has a voice, who does the work, and who gets to benefit – die hard. Like most organizations, museums, libraries and archives forged their dreams in the twentieth century when success was equated with impressive buildings full of experts, big collections and visitors through the doors. That was reality, there was no Internet yet, and one could hardly imagine any other type of measures of excellence. And the concept of a commons seems perverse and strange in that context: in the world of the bricks-and-mortar, what self-respecting museum would share its privilege and authority with the crowd, and who but barbarians would accept it? What responsible institution would relinquish control of its data and invite billions of people to collaborate, or free collections from copyright and abandon hope of squeezing profits from licensing and fees?

But even back in 1853, people like Joseph Henry, the first chief administrator of the Smithsonian Institution (now the world’s largest museum and research complex, based in Washington, DC), saw that museums, libraries and archives could accomplish great deeds in society – not by only looking inward at their own experts and collections, but by looking outward, to the imagination and energy of citizens. “The worth and importance of the Institution is not to be estimated by what it accumulates within the walls of its building,” wrote Henry, in the Smithsonian’s first annual report, “but by what it sends forth to the world.”

It is a beautiful sentiment: we just lacked the means to fully realize it until now. Free, unrestricted digital access is the key, and the creativity and action of citizens – commoning, as it is called throughout this book – is what turns it in the lock.

Open to the world

The New York Public Library recently put 20,000 high-resolution public domain maps online. "What’s this all mean?" asks Matt Knutzen of the library’s map division, "It means you can have the maps, all of them if you want, for free, in high resolution. We’ve scanned them to enable their use in the broadest possible ways by the largest number of people."

Amsterdam’s Rijksmuseum owns some of the most priceless masterpieces in Western art, but rather than hoard them, they give them to the world. The Rijksmuseum has over 150,000 high-resolution public domain reproductions of works of art on its website, and the museum encourages and celebrates re-use of these resources through its innovative Rijksstudio project and API. "We’re a public institution," said Taco Dibbits, the Rijksmuseum’s director of collections, "and so the art and objects we have are, in a way, everyone’s property."

Eighty-eight institutions from sixteen countries have contributed 1.3 million images to The Flickr Commons, an ongoing project to increase access to, and interaction with, public photography collections around the world. All images in the Flickr Commons are presented with "no known copyright restrictions" and are free to use for any purpose, by anyone.

Europeana, a European Commission initiative to increase access to cultural resources, provides a single point of access to over 3.9 million public domain and CCØ public domain books, artworks, and other museum, library, and archive items from almost 400 collecting institutions. "Entrusted with the preservation of our shared knowledge and culture, not-for-profit memory organizations should take upon themselves a special role in the effective labeling and preserving of Public Domain works," reads Europeana’s Public Domain Charter. "As part of this role they need to ensure that works in the Public Domain are accessible to all of society, by making them available as widely as possible."

And the Wikimedia Commons, "a database of 22,022,531 freely usable media files to which anyone can contribute," is perhaps the best, most used, and most productive cultural commons in the world, despite the fact – or perhaps because of the fact – that it is run not by institutions, bound by tradition, but by volunteers, inspired and empowered to take action and create value through their own efforts.

The Wikimedia Commons provides images and other media resources for Wikipedia’s 35 million articles, and while a growing number of those resources are contributed by museums, libraries and archives, many more are contributed by individual citizens – commoners and activists – who scour the Web for relevant images and reference materials, scan pages from books, organize and execute collaborative projects, and even upload photographs from their own visits to museum and cultural sites to help improve the quality and breadth of Wikipedia articles.

Because of its foundation of free and open resources and its network of volunteers, the Wikimedia Commons operates at a magnificent, global scale – transcending professional, institutional, and national boundaries to serve over 500 million Wikipedia readers a month in 280 languages. Even the world’s greatest museums, libraries and archives cannot hope to match that reach and impact – especially if they cling to the methods and measures of the past.

The work of the world’s cultural institutions is a matter of great conse-quence now, as wise and engaged citizens are our best hope to quench the flames of fear and hatred and thaw the bitter cold of ignorance and neglect. And with the fire and frost upon us we have only a few moments to take action: What should we ask our museum, library, and archive institutions to do? How should they act to scale and amplify their impact in society? The commons offers the way forward.

This text is from the book "Patterns of Commoning". For more articles visit our dossier. 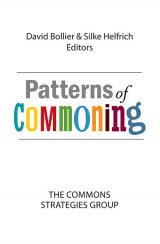 More than sixty frontline activists, academics and project leaders from twenty countries explain how commoning is empowering people to challenge the deep pathologies of contemporary capitalism and invent powerful, participatory alternatives. A special series of essays explores the inner dynamics of commoning - its ethics, social practices and worldview - to explain why the building of new worlds starts from within.

By Véronique Rioufol and Sjoerd Wartena

Venezuela: "We Are One Big Conversation"

Cecosesola is a network of about sixty cooperatives and grassroots organizations in Venezuela, with about 20,000 members. The cooperatives sell at weekly markets and provide community-backed loans, among many other services.