Arab Spring: What remains of the revolution?

Five years after the start of the Arab Spring, the mood of a new beginning has given way to disillusionment. In view of the never-ending violence and the return of authoritarian forms of rule, even of failed states, the Arab Spring could be considered largely unsuccessful. Such a sweeping judgment, however, is shortsighted. In Tunisia democratization has advanced relatively far and in Morocco and Jordan the processes of political reform have begun, albeit haltingly. In other countries, however, the protests were forcibly quashed (Bahrain) or devolved into civil war (Syria, Libya). In Egypt, where the democracy movement had initially been very successful, the transformation was undone by a coup. And finally, the ruling houses in the Gulf States have managed to stem public protests through a combination of political repression and financial incentives. Why have the mass protests against the old elites and the demands for political freedom and social justice led thus far to such different results?

Tunisia is still considered the hope of the Arab democracy movement. This is where the Arab Spring began in 2011, triggered by the self-immolation of the street vendor Mohamed Bouazizi in Sidi Bouzid in December 2010. It was an act of desperation that drew attention to the poor living conditions of a majority of the Tunisian population. It sparked a shockwave throughout the country; as a result of the ensuing mass protests, the government stepped down within only a few weeks, with President Ben Ali fleeing to exile in Saudi Arabia. A protracted political transition followed, which climaxed in 2014 with the passage of a new, democratic constitution and free parliamentary and presidential elections. This was overshadowed by a growing social polarization into two camps: conservative and Islamist vs. secular and Western-oriented. The conflict came to a head when Mohamed Brahmi and Chokri Belaid, two prominent left-wing oppositional members of parliament, were murdered. As a result of social pressure and through mediation by the trade union organization Union Génerale Tunisienne du Travail (UGTT), a consensus was ultimately reached. This was made possible, in part, by activists in the Tunisian women’s movement, bloggers, representatives of human rights organizations, and intellectuals, who had been critically following the work of the National Constituent Assembly (NCA), objecting to possible restrictions on civil rights and liberties. Another prerequisite for the constitutional compromise was the pragmatic stance of the moderate Islamist Ennahda Movement, the strongest party in the NCA, which ultimately removed additional Islamic references from the draft constitution. The democratic transformation of Tunisia has been rather successful so far for various reasons. For one, the comparatively high level of education of the population and the country’s relatively liberal tradition have resulted in a strong civil society. It also helped that Tunisian society was less fragmented along ethnic and religious lines than is the case in many other countries in the region. Religious reform movements have made it easier for civil society and the opposition parties to assert their own demands to counter the theocratic ambitions of the Ennahda.

Tunisia’s young democracy passed its first important litmus test with the parliamentary and presidential elections in late 2014. Not only did the elections proceed freely and fairly, but all parties accepted the outcome, which brought a new majority and a victory for the secular-nationalist Nidaa-Tounes party.

Despite the successes, the challenges facing the country on its path to becoming a consolidated democracy continue to be immense. Grave social problems such as high youth unemployment remain unresolved. In late January 2016 thousands of people again took to the streets to protest unemployment and the lack of prospects, Moreover, the security situation is very tense, as recently became frighteningly clear when devastating terrorist acts in March 2015 in Tunis and in June 2015 in Sousse killed dozens of people, mostly foreign tourists.

Since the revolution in 2011 that swept away the Mubarak regime, Egypt has twice gone through radical political upheaval. In early 2011 secular forces and various Islamic organizations protested against the fossilized political caste and for better social conditions and democracy. Many, especially young, activists participated in the revolution with new, innovative forms of political protest—whether via social media or on the streets. After only a few weeks Hosni Mubarak was overthrown. This made Tahrir Square in Cairo, the center of the protest movement, into a symbol of democratic new beginnings in the Arab world. The Muslim Brotherhood, the only organization that was also well-established in the rural areas, was able to take advantage of the January Revolution for their own purposes. Their party won the largely free elections in 2012 and designated Mohamed Morsi as the new president. The liberal and left-wing spectrum was not in a position to offer any real alternative to the Muslim Brotherhood due to organizational difficulties, in particular because the divided parties were unable to develop a joint strategy.

After taking power, however, the Muslim Brotherhood was not able to create a social consensus on important questions for the future. According to Egyptian writer Mansoura Ez-Eldin, they continued to rule in the style of an underground organization.[1] The Islamist draft constitution, which did not reflect Egypt’s religious and cultural diversity, was forced through against the will of the urban middle class. Serious social and economic issues and the establishment of new democratic institutions, however, were neglected. Mass protests resumed, this time against a head of state who had only been in office for a few months.

When the military staged a coup in July 2013 and a transitional government was installed, thousands of people on Tahrir Square cheered. Many Egyptians viewed the military coup as a chance to complete the revolution, to continue the process of democratization—once the military restored law and order. This proved to be an illusion. Following the massacre of protesting Morsi supporters, in which security forces killed more than 800 people in August 2013, it became clear that the military would lead the country back to an autocracy. The democratic opening of Egypt was rolled back and all opposition, whether Islamic or secular, was repressed. Freedom of assembly and of opinion became greatly restricted. Forty-five thousand people were thrown into prison and show and mock trials took place. General Abdel Fattah al-Sisi, the new strongman in Egypt, greatly expanded the repressive state apparatus after being elected president. This also had an impact on civil society in Egypt, which had lost its capacity to act. This strategy helped the new ruling powers in Egypt, with financial support from the Gulf States, establish peace and calm in the country, for the time being at least.

In Syria, as well, citizens protested in early 2011 against the regime, denouncing corruption, cronyism, and police brutality, and demanding more civil rights. With new lyrics to traditional folk songs, graffiti, and social media, voices called for the ouster of President Bashar al-Assad and the establishment of a free, united Syria. Daraa, in southern Syria, is considered the cradle of the revolution, where fifteen teenagers were arrested and tortured in March 2011 for writing anti-government graffiti. The demonstrations demanding their release were brutally suppressed by the regime; marksmen were ordered to fire on unarmed demonstrators. This sparked a wave of protests that spread throughout the country. The Assad regime, which even prior to the Arab Spring was one of the most repressive in the region, was determined from the outset not to make any major political concessions. The government used all powers at its disposal to quash the protest movement. In the very first months, more than a thousand demonstrators were shot by Assad’s security forces; there were mass arrests and torture, and countless opponents of the regime “disappeared” without a trace.

In reaction to the regime’s brutality, the protest movement, which was initially largely nonviolent, developed into an armed rebellion. Deserters from the Syrian military founded the so-called Free Syrian Army (FSA) in July 2011 as an umbrella organization of various resistance groups. At first they concentrated on protecting the population in opposition strongholds from Assad’s army. Starting in 2012 at the latest, the rebels went on the offensive, attacking the Syrian armed forces and taking over significant regions and urban districts. The level of violence escalated, turning the Syrian civil war into one of the most brutal conflicts since the end of the Second World War, prompting millions of people to flee. Because the Free Syrian Army was unable to protect people from the force of the regime, many groups abandoned the FSA and joined Islamist or jihadist combat units, which were far better equipped thanks to external funding, particularly from the Gulf States. More and more rebel groups were now fighting against the regime and, increasingly, against each other. Neither the FSA leadership nor the Syrian opposition in exile could influence, much less control, them. As of 2013, two offshoots of al-Qaeda are also fighting in Syria: the hard-hitting al-Nusra Front and the Islamic State in Iraq and Syria (ISIS) and their allies. The civilian population is currently also subjected to the terror of ISIS (today IS) and its allies.

After five years, vast areas of Syria lie in ruins, half the population has fled, and more than 250,000 people have been killed. Despite the extremely difficult conditions, there are still countless activists inside and outside the country who are engaging in civil resistance and holding fast to their goal of a democratic Syria. They document human rights violations and smuggle information out of the country; they operate media platforms to oppose the regime’s war propaganda; they publish their own newspapers or organize workshops on the peaceful coexistence of different religious groups and the democratic future of Syria. First and foremost, however, they provide humanitarian aid in places that are inaccessible to international aid organizations. 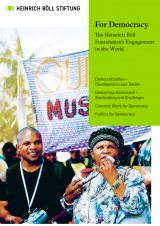