Inside the Green Economy: Nature or natural capital?

Green Economy sets out to rectify the failure of classical economics witnessed with regard to climate change and biodiversity loss by assigning a monetary value to nature and by integrating ecosystem services into the market system. Quantifying (accounting), appropriating and offsetting are the key methods of this route out of the climate and biodiversity crisis.

Perhaps the most succinct expression of economic failure with regard to nature comes from Pavan Sukhdev: “We use nature because it’s valuable, but we lose it because it is free.” With this remark, Sukhdev places the question of the “value of nature” at the heart of the debate
about a Green Economy. The “value” concept is ambiguous and does not necessarily denote a monetary value. But for an economic valuation, the question of price is central. And there is no price on natural assets such as clean air; this is inferred to be the reason for their overexploitation or the root cause of their degradation. The World Bank expresses it as follows: “For economists, greener growth is fundamentally about changing the incentives that have led to environmental degradation and depletion — that is, ‘getting the prices right’.”

For that to happen, prices must exist. Consequently, it argues: “Putting a monetary value on natural ecosystems is a key step on the road to ‘green’ economic growth.”

The fact that natural assets are not priced leads to a “misallocation of capital”, according to UNEP. The great challenge of Green Economy is therefore to integrate into economic calculations and price systems the natural assets that economics has not previously taken
into account.

The conceptual basis for this is a reframing of the concept of nature — as opposed to any transformation of our mode of production and consumption. The main implication associated with “rethinking economics” is “redefining nature”. The task that immediately arises is that of developing methods, techniques and measurement procedures with which nature can now be valued and accounted for in economic terms. And, if the non-valuation of nature in economic terms has been the cause of its degradation up to now, then, within this logic, the solutions and intervention approaches concentrate specifically on the economisation of ecosystem services and nature’s resources.
As a result, many structural causes of the crisis of nature and climate change become invisible, and are no longer given extensive consideration in the search for solutions and ways out. An extremely complex constellation of problems is reduced to bare essentials. This
is always accompanied by a “rendering invisible” of complex realities.

Fundamentals for the redefinition of nature, then, are its measurability and the (monetary) valorisation of its “services” (on this, see the following chapters). This process gives rise to new forms of appropriation of nature, practised mainly by those intent upon offsetting the
destruction of one ecosystem against another, or numerous others, in order to justify “business as usual” despite planetary boundaries. Here, the social bonds, the existing relationships between humans and nature (and humans as part of nature) are mainly disregarded, although they are massively affected by the new forms of appropriation.

In economic analyses and political statements on Green Economy, the concept of natural capital is increasingly becoming established. As a conception it is extremely broadly framed, and perhaps this is also a source of difficulties and misunderstandings in the course of
the somewhat heated debate about the financialisation of nature.

Natural capital encompasses, first and foremost, “the stock” of natural assets, which includes things like mineral resources. The crucial point, however, is that this stock provides services such as air and water filtration. For this reason, “natural capital accounting” (NCA) normally aims both to record the stock and value the “flow”, i.e. the services rendered by natural capital. In this way, for instance, not only a country’s forested area (is it expanding, is it contracting?) but also service provided by this forest in storing CO2 can be included in NCA.
Natural capital erodes or is continuously destroyed by human influence. In the language of the new economics of nature, this environmental crisis is viewed as follows: “The startling erosion of our natural capital base will become the defining 21st century challenge facing every business. Natural capital is the foundation that supports human society, all economic activity and every business. The decline in this capital base, if left unchecked, will wreak havoc on business and society as we know it” — reads the emphatic warning of Ernst & Young LLP, one of the world’s largest accountancy corporations.

This purely economic view of nature entices and recruits — so it seems — new members into the alliance for the protection of “natural capital”. The Natural Capital Coalition is a global multi-stakeholder platform whose participants include the World Bank, UNEP, the World Business Council for Sustainable Development and universities as well as numerous corporations and environmental organisations. This is how it views natural capital: “There are no extra planets. And as such we are using up the capital provided by nature rapidly and borrowing the remainder from the future. That is unsustainable.

It is time that Natural Capital is taken on board in business and that its value is accounted for. This holds as much true for governments as for business. To bring Natural Capital into the systems that govern our businesses and companies, we will need the tools to calculate
their worth, both in monetary and non-monetary terms.”

The title of a 2006 essay by Morgan Robertson, an American ecologist, who worked for the American Wetland Banking Scheme on the monetary valuation of wetlands, neatly encapsulates what is at stake: “The nature that capital can see.” For only what is visible to the economic eye counts as “nature”. This calls for clearly quantifiable natural capital metrics. In the meantime, a significant constellation of actors has formed worldwide and is tackling this complex task. A Natural Capital Declaration drafted at the Rio+20 Conference in 2012 was signed by governments, financial sector institutions, corporations and NGOs. Among the objectives of the above-mentioned Natural Capital Coalition is the drafting of a Natural Capital Protocol that will be launched in 2016. The World Bank also brought the Waves Initiative into being (“Waves” stands for Wealth Accounting and Valuation of Ecosystem Services). Whereas the objective of Waves is to support countries in new approaches to accounting for natural capital, the Natural Capital Coalition is aimed more at an international
standardisation of methods.

An important milestone on the path to a “natural capital accounting” mechanism is the UN System of Environmental Economic Accounting (SEEA), which has developed an internationally agreed standard for biophysical quantification of natural resources. “SEEA
Experimental Ecosystem Accounting has been developed within the broader process of revising the SEEA-2003 — a process initiated by the United Nations Statistical Commission (UNSC) in 2007. The primary objective of the SEEA revision process was the establishment of a statistical standard for environmental-economic accounting. At its 43rd meeting in February 2012, the UNSC adopted the SEEA Central Framework as an initial international statistical standard for environmental-economic accounting.” The UN SEEA system therefore lays the foundation stone for a “statistical framework to measure environment and its interaction with economy”. The SEEA’s biophysical quantification is not synonymous with monetisation but stands as a comprehensive, global approach to making nature quantifiable and comparable.

The insistence that natural capital — to maintain this linguistic convention — is being disregarded is an old and plausible critique of traditional economic metrics, particularly gross domestic product (GDP). The GDP indicator does not take account of the degradation
of nature or of natural capital, for example. Hence, it would certainly make sense not only to take into account fish consumption but also the development of fish stocks. Because gross domestic product fails to consider damage to the environment or even to value it positively,
the natural capital accounting approach is highly plausible — at least at first glance.

Natural capital can be entered in the books in different ways, for example, by accounting for instances of damage to natural capital. In environmental economics, this is known as the valuation of externalities and has filtered through to mainstream economists. A good example of an external effect is air pollution. It can be regulated by means of statutory measures like banning lead in petrol, or else through pricing, perhaps in the form of a tax. In the debate about environmental harms and the use of economic mechanisms to combat these, this idea has been summed up in the catchy slogan: “The prices must tell the ecological truth.” While this seems plausible or even persuasive at first, it still throws up a series of questions: For instance, does 20 cents more on the price of a litre of petrol tell the whole “truth” about petroleum and transport? (We will go into ambiguities regarding the “internalization of external effects” more extensively later.)

However, the “natural capital” conception opens up yet another perspective for redefining the relationship of economics and nature and the valorisation of its resources. In recent years, functions of nature such as CO2 storage in forests or soils have increasingly been described and conceptually framed as services provided by ecosystems. Now these “ecosystem services” are similarly being eyed up for economic valuation.

The conception of “natural capital” and “natural capital accounting” unifies these two strands of economic valuation of nature — the pricing of negative externalities and the valuation of ecosystem services. The debate surrounding the assessment of economic mechanisms in the context of Green Economy is often muddled because the various forms of valorisation and pricing are not distinguished clearly enough.
The “natural capital” concept enters nature, as we have said, into the dimensions of the economy: nature can and will be described and accounted for in economic terms. The great failure of traditional economics indeed was and is that it never came close to accomplishing
this. Now Green Economy hopes to assist by making it easier to account for nature; which means that nature must become easier to measure. The old, familiar maxim that “we can only manage what we measure”, modulated into variants like “we can only treasure what
we measure”, has become a paradigmatic theme (almost a mantra) of Green Economy. In today’s world, data that can be expressed in euros and dollars are becoming more and more important. This leads us to the other important mechanism in the economisation of nature: to monetisation, i.e. determining monetary values.

This is an excerpt of the book "Inside the Green Economy" and is a part of the dossier of the same name. 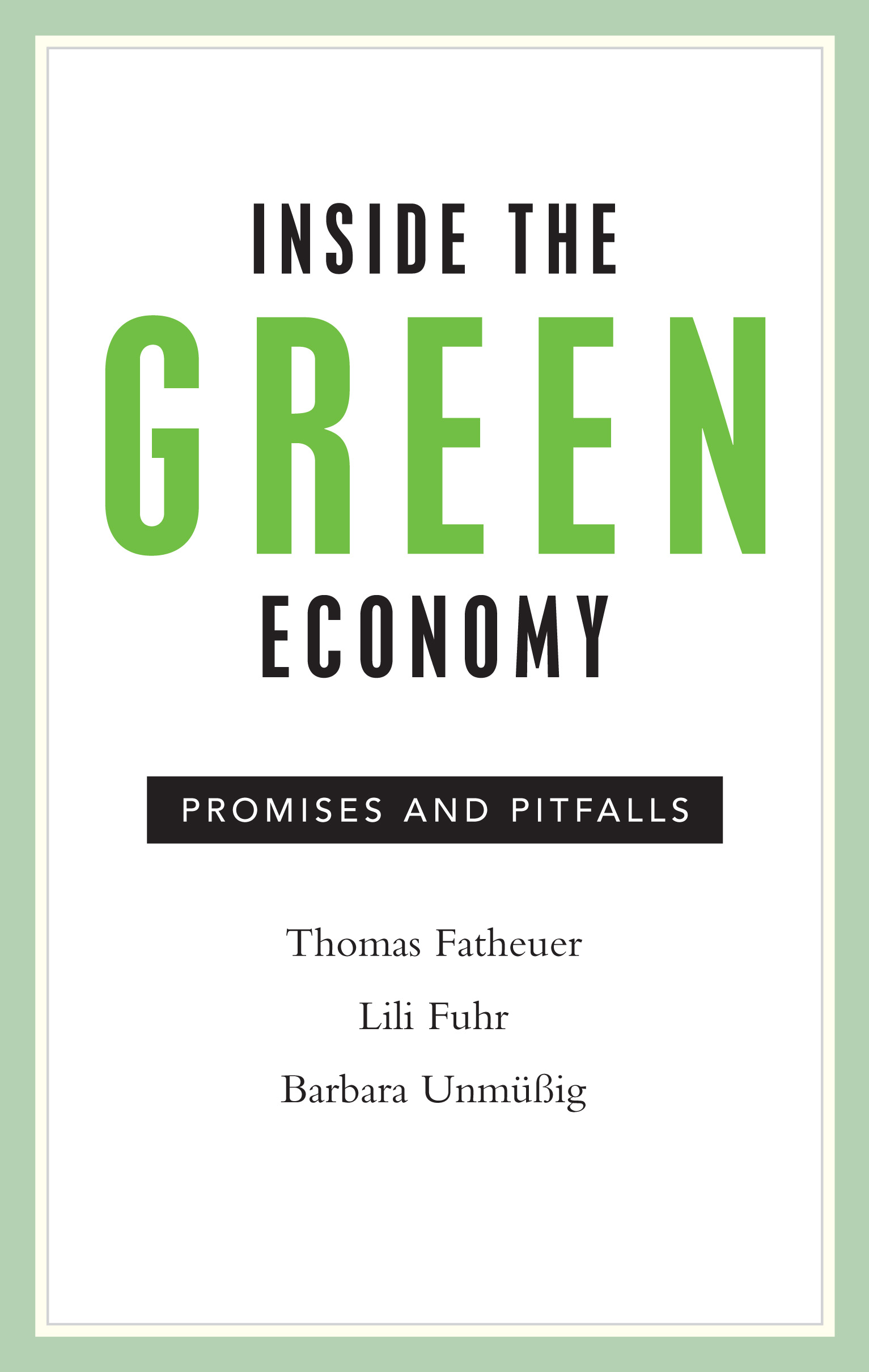 Inside the Green Economy - Promises and Pitfalls

The economic and ecological bases of a general prosperity are in danger, the gap between rich and poor is widening. The concept of the Green Economy offers a new model, based primarily on large-scale technological solutions. But the Green Economy cares little about politics, barely registers human rights, does not recognize social actors and suggests the possibility of reform without conflict. It suggests that the world as we know it can continue with green growth.

The Green Economy as a way out of the global crisis?

“Business as usual” is not a realistic option, as even the international mainstream of the World Bank, UNEP and OECD acknowledge, an admission which has in turn boosted the Green Economy’s career prospects.
By Barbara Unmüßig, Thomas Fatheuer and Lili Fuhr

Inside the Green Economy

The economic and ecological bases of a general prosperity are in danger. The Green Economy offers a model, based primarily on large-scale technological innovation. A solution if it results in even more consumption?