The 2014 World Cup in Brazil: its legacy and challenges

Marilene de Paula, coordinator for the Heinrich-Böll-Foundation Brazil, analyzes the legacy of the 2014 World Cup.

Brazil, the 'land of football' jumped for joy in 2007 when the country was appointed to host the 2014 FIFA World Cup. This would not only enable the five-time world soccer champions to play at home but also give this emerging country with the world's sixth-largest economy an opportunity to showcase its strengths as a regional leader and BRICS member state. Most importantly, the event would hopefully enhance Brazil's traditional image of a nation with high rates of violence and enormous social inequalities.

At the FIFA ceremony in Zürich, Switzerland, on 30 October 30, 2007, Brazilian president Luis Inácio Lula da Silva clearly stated the nation's intention in his acceptance speech:
Here we are assuming responsibility as a nation, as the Brazilian State, to prove to the world that we have a stable, growing economy, that we are a country that has reached stability. We are a country that has many problems, yes, but the people in our country are determined to solve these problems.

But what has been the legacy for Brazil? Were the promises kept? Who benefited most from hosting the World Cup? To obtain true answers to these questions will take some time. Marilene de Paula, human rights programme coordinator for the Heinrich-Böll-Foundation Brazil analyzes some of the processes preceding kick-off, and assesses the legacy of the 2014 World Cup.

The study was realized with support of Solidar Suisse and can be accessed here.

The Portuguese version of the publication can be accessed here. 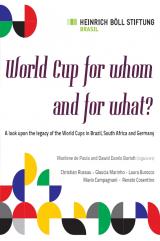 World Cup for whom and for what?

Taking a look upon the legacy of the World Cups in Brazil, South Africa and Germany this publication gives detailed information about the financial, political and social impact of the mega-event.

Brazil will host the most expensive World Cup of all time. Around 85 percent of the expenses will be funded with public money. For the first time in history, a multitude of questions are being raised about the real meaning of an international mega-event for the host population. This web dossier was designed to add relevant data regarding the guarantee of people's rights and as offer for critical perspectives about the realities on the ground.