Guanabara: the river that runs through our village

Thanks to superficial cleaning measures plastic waste will probably not disturb the Olympic Sailing Competitions in the Guanabara Bay. A long-term restoration of the bay, however, stays indispensable as Emanuel Alencar illustrates in this article.

The 143 rivers, brooks, and sewage channels that flow into Guanabara Bay reflect some of what we were, are, and what we want to be. From the cleaner waters that cross the Environmental Protection Area (APA) of Guapimirim to the lifeless channels of Baixada Fluminense, Guanabara is (still) a living, pulsating being, one that intrigues and challenges us every day.

Occupied by our species for at least 8 thousand years, this region has witnessed Brazil’s history, as told in textbooks. From the limpid waters that left open-mouthed Portuguese who landed here in 1502 to the current degraded scenery, the only thing that has not changed in the bay is its striking beauty. It is still  serves as the international trademark of Rio de Janeiro, a component of our DNA, the first impression first presented to whoever arrives in town, be it by land, sea or air.

Taking care of the bay is taking care of ourselves. But no matter how much we strive to destroy it, Guanabara always surprises the world with its resilience: in only 12 days, 50% of its waters are totally renewed. That is a huge privilege. Guanabara is the kind of bay that is greatly affected by the open-sea dynamics, differently from many others. Even so, we have been pushing our luck. We have neglected it in an almost criminal way, especially over the last forty years. We have been dumping all kinds of pollutants into its waters.

We have not been able to undo the harm we have caused. Pollution by domestic sewage is the main scourge of this ecosystem – responsible for around 85% of its pollution in comparison to 15% of industrial pollution. The largest bay recovery program, created 22 years ago, ended without achieving any significant results regarding environmental improvement. The US$ 1.2 billion used in the Pollution Abatement Program for Guanabara Bay came from two sources: the Inter-American Development Bank (IDB) and the Japan International Cooperation Agency (JICA), a Japanese development-fostering organization.

The eight sewage treatment stations built through the program were made to treat 11,882 liters per second, but currently only actually treat 6,069 liters per second, 51% of what was planned two decades ago. In 2006, the program was officially shut down, in a melancholic ending for Rio, and to this day it is harshly criticized by the Japanese agency. At the end of the contracts, the program was classified by the IDB as “ineffective”, “unsatisfactory”, “irrelevant” and “unlikely”.

In the launching of the Programa de Despoluição da Baía de Guanabara, PDBG – Pollution Abatement Program for Guanabara Bay), coordinated by the state government, several experts saw the first big problem:  even if it were totally executed, within its stipulated deadline, the program would not be enough to effectively depollute the region’s ecosystem. The idea sold to the population for the depollution of Guanabara Bay was that the disastrous situation could be reversed with US$ 1.2 billion. Now there is a unanimous conviction that it would take at least ten times that amount of resources to stop all of the domestic and industrial sewage dumping in Guanabara. A new program to improve the bay’s environmental quality was launched in 2012, with new deadlines, new goals, a new investment of US$ 640 million. The discredit remains.

It is not very easy to believe in promises here these days. Together with the official announcement that Rio was proposing to host 2016 Olympic Games, in September 2007, came the promise that the bay would be free of garbage and of untreated sewage by the time the Games would begin. Nine years later, the goal of treating 80% of the sewage dumped in the bay – established by the state government and by the International Olympic Committee (IOC) – still does not appear on the horizon as something feasible in the short term.

No less than 624 thousand homes have no access to clean water, and 1.61 million suffer with the absence of a sewage system, according to data by Trata Brasil Institute. An estimate investment of R$ 27.7 billion (6.9 billion Euro: This value, as well as all the following values in Euro are based on the exchange rate of 3.98 of 28th April 2016) would be necessary to make sanitation available for the entire region. Between 2000 and 2012, states Trata Brasil, the number of households without access to sewage lines in the Guanabara hydrographic basin grew by 55%.

As if this enormous sanitation failure were not enough – and that is shamefully backwards for us as a nation, our rulers also seem to have chosen a dangerous and not very sustainable path for the bay’s treatment. Guanabara was elected the center of oil-prospecting operations in the coastal strip’s section between the states of Santa Catarina and Espírito Santo, in layers located between 5 - 7 thousand meters deep under the sea level (the pre-salt layer). There are many terminals and shipyards in the region, and huge pressure to increase the areas for anchoring ships.

Rio’s port is remarkably busy. In 2009, it received 1,568 ships. In 2014, that number went up to 5,198, which means an increase of over 300%. With such a boom, the traditional activities are the ones who experience the most serious setbacks. Fishing is restricted to 12% of the water surface. Animals suffer with the prevalence of the oil industry. Estuarine-dolphins, which live in the inner areas of the bay, and are featured in the city’s coat of arms, numbered around 800 in the 1970’s, but these days there are no more than 38 left, according to Rio State University (UERJ) Aquatic Mammals and Bioindicators Lab (Maqua). 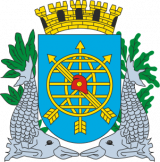 What bay do we want to have in the future? Will we trade environmental preservation for oil exploration development? Is it possible to combine both activities and ensure a more sustainable Guanabara? The lack of management of the water surface activities – in Guanabara there is no such thing as a bay authority, common in the United States of America – relegates to uncertainty the public policies directed at the fishing segment and other activities, like those linked to ecotourism. Most of the time the lack of information leaves civil society deprived of the elements needed to demand from the powers that be a long-term depollution schedule. Although this has been promised many times, there has yet to be a website where the population can follow the progress of works and the application of resources in Guanabara.

The floating garbage will pose a big problem for the Olympic sailing competitions, which will take place in lanes placed inside the bay. While the Olympic Committee assures that the water conditions during the events (supposed to be more concentrated in the bay's mouth) will be good, there is some tension in the air regarding the waste. Estimates made by the Brazilian Association of Public and Special Residues Cleaning (Abrelpe) are not very optimistic:  around 90 tons of residues are dumped in the bay water surface every single day. That is a volume greater than the ecobarriers’ and ecoboats’ collecting capacity, not to mention that they are palliative projects, which has been seen by public opinion as the state government’s bet for trying to minimize negative impacts. If it does not rain on the eve of the competitions, there will probably be no big problems, such as a discarded plastic bag altering the results of a regatta, for instance. But who can be sure that will not happen? We have not done our homework, and the odds of an internationally broadcast shame fest are not completely negligible.

Long-term actions, with established goals and the active participation of civil society are essential for the recovery of Guanabara Bay. There is no time . Meanwhile, the bay insists on surviving. Its dark waters witness the devastating actions of homo sapiens. They slowly flow, as if silently crying and begging: “Please watch over me! I am the river that runs through your village!”
The Portuguese version of this article can be accessed here.

A long version of the Portuguese text was published as book at the end of June. More information can be found on the website of our Brazilian office.

The German version of this article can be accessed here.