Torture and sexualized violence are part of everyday life in Syrian prisons. However, human rights violations committed by the Assad regime play no role at the Geneva peace talks. With this in mind, Barbara Unmüßig, in her introductory remarks, calls for women to be included as peace negotiators.

Torture and acts of sexualized violence committed against women, men and children in Syria are nothing new. They are two of the cornerstones of the now 46-year reign of terror by the Assad clan. Virtually every single Syrian family has at least one member that has been or is being subjected to torture and/or sexualized violence in the country’s prisons. Under the Assad regime, systematic acts of torture are committed inside prisons and, even worse, in the interrogation centers of the various intelligence services.

Here, sexualized violence against women, men and minors is used as one of the main forms of torture. According to a 2016 report by the Women’s International League for Peace and Freedom, the majority of reported rape cases and other forms of sexualized violence were committed by government forces and government-friendly militia.

Rampant and systematic violence in Syria is no secret. The regime wants it to be talked about so that people will be intimidated and uprisings against its tyranny prevented. Torture is deployed in order to intimidate and gag opposition members and their families. However, the term “opposition members” should not be construed in the party-political sense: in part, opposition members, i.e. opponents of the regime, are deemed to be people who quite simply live in the wrong part of town; people in relief organizations actively involved in ensuring the survival of their fellow citizens; students who took to the streets to fight for more democracy during the “Damascus Spring”; human rights lawyers, journalists… Over every section of Syria’s civil society hangs the threat of indiscriminate arrest. They are forced to endure unspeakable conditions while in detention; many have never been able to contact a lawyer.

Today, five years after the revolution began in 2011, torture is not just used as a form of intimidation but also as a means of revenge. Torture is equally practiced by armed, anti-regime groups, frequently deploying the same methods used by the regime, as evidenced by the latest Amnesty International report on the cities of Aleppo and Idlib. Notwithstanding this, the regime – with the assistance of Russia and Iran – remains the main perpetrator of violence.

Unfortunately, however, German media coverage on war-related violence in Syria takes priority over the subject of systematic torture. If it is mentioned at all, then usually sexualized violence in connection with the Islamist terror group IS (so-called Islamic State). This is a distorted reality that we want to counter by holding this event.

We want to remind people that, according to the Syrian Observatory for Human Rights, the regime has detained some 200,000 people since the beginning of the revolution who have been tortured in some shape or form. 40,000 named cases have been documented. In many instances, the detainees have simply “disappeared”, with relatives and friends having no clue as to whether they are still alive or where they are being kept.

According to the UN, the regime is also responsible for the vast majority of the estimated 400,000 dead. The bulk of them were killed in devastating barrel bomb attacks on residential areas.

No, it’s not about offsetting one death against another. Because treating the dead and the victims as a number is an act of violence in itself. Instead, our job must be to identify structures of violence, on the one hand – and ways to combat them, on the other. That is why the one-sided scandalization of violence in the context of IS is too short-sighted.

The Syrian regime is the actor that continues to insist that it be recognized by the international community as the sole legitimate representative of the Syrian people. It has laid claim to the country’s UN seat, has signed up to human rights conventions and CEDAW – but is, at the same time, the biggest force behind systematic human and women’s rights violations. Women personnel in prisons? Virtually non-existent. Women arrested in Syria are subjected to male arbitrariness from day one. Why are we holding this event now?

The peace talks are moving at a snail’s pace – to date, they have failed to bring the country any step closer to peace. This is a grueling process for democratic opposition members and activists – and yet they refuse to grow tired of fighting for a democratic Syria post-Assad. And for this to happen, the human rights crimes committed on all sides need to be processed and documented. Here, we are working with such courageous actors as Mazen Darwish, who, since 2004, has been documenting crimes committed by the regime and who has always written against the tyranny of the Assad clan. He was detained for doing so. Today, his focus above all lies in examining what European governments can do to protect witnesses of torture who want to testify.

Experiences gained in countries such as Bosnia and Afghanistan – to name but two – have shown that not just the war-torn countries themselves but also the international community have a hard time recognizing sexualized violence in particular as a war crime and ensuring that the victims are treated as war invalids and “surviving heroes”. But what kind of peace can there be if there is no justice? What does peace without rights look like? These are questions that have occupied Joumana Seif, a Syrian lawyer and activist, who has taken part in the Geneva peace talks. She has detected an uncanny dynamic in Geneva over the past weeks:

Justice and transitional justice should be skipped in favor of reconciliation: “Reconcile!” This call was especially directed at the women’s delegation in Geneva this past April. But how can reconciliation possibly become a reality if systematic violence as well as sexualized violence continue to go unpunished?

The Heinrich Böll Stiftung has been working closely with members of democratic civil society in Syria and in exile since the revolution commenced in Syria in 2011. We have adopted a clear stance against the Assad regime and share the assessment of our Syrian partners that a peace order can only be established if war crimes are systematically punished, in other words, if rights and peace are considered as one entity. To achieve this, women must be brought to the peace tables as negotiators and stakeholders for peace. Their expertise must be incorporated far more effectively.

Photos of the event 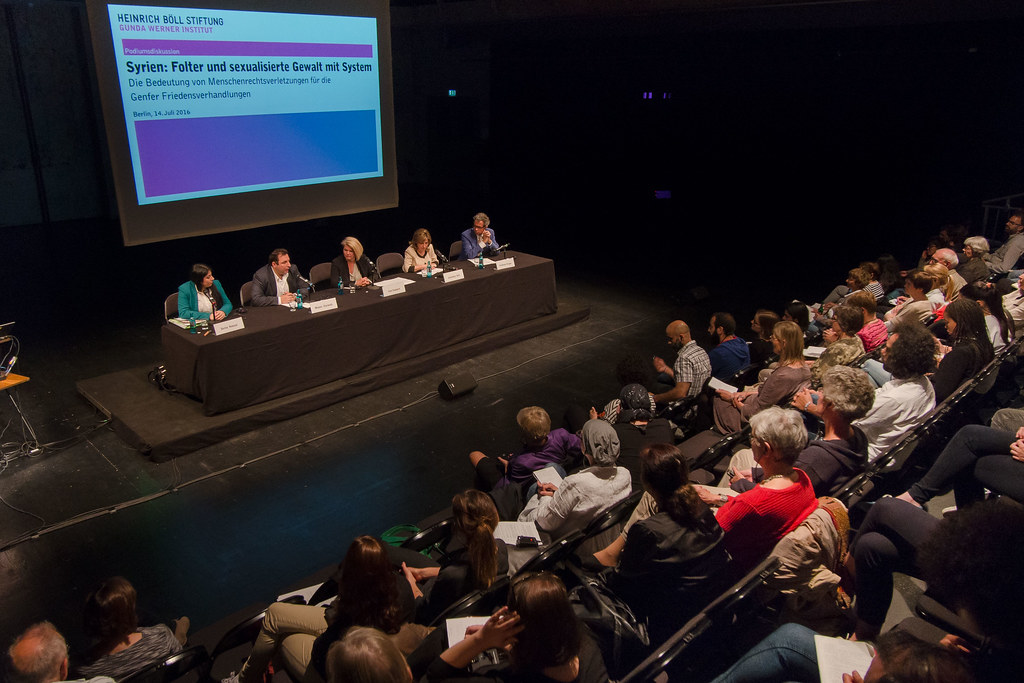 Sexual violence is a global problem affecting all cultures and religions

Ten experts from eight different countries share their views and perceptions of the assaults committed on New Year’s Eve in Cologne. A contribution to the ongoing debate on sexualised violence and harassment in Germany.
By Ines Kappert, Dr. Antonie Nord and Simon Ilse