Promoting Peace on the Korean Peninsula: Departure Points for Europe

The EU or its member states have ideal requisites for greater involvement in a necessary peace process between North and South Korea.

Teaser Image Caption
The Korean peace process represents a grand challenge in diplomatic cooperation, but also a major chance for the EU to test its diplomacy potential.

At first sight, the role of the EU and its member states in resolving the conflict on the Korean Peninsula and achieve a viable mid-term to long-term solution seems to be limited. Neither is the EU a regional security actor in Northeast Asia, nor has it been directly involved in any previous negotiations. Yet, for precisely these reasons, the EU or its member states might have the ideal requisites for greater involvement in a necessary peace process. Besides support through economic cooperation and financial aid, which has become a standard diplomatic tool, a greater diplomatic role for the EU is also desirable.

In addition to political support for South Korea’s endeavors towards a sustainable diplomatic process, European players could conceivably implement a set of other measures. Previous summits and talks had taken place without a mediator, and so far the key parties have not articulated a need for active mediation. However, given the continuously lopsided expectations (i.e., expected concessions) and absolute demands put on North Korea, an organized approach for conflict settlement would be desirable. Here, the relatively neutral position of European states in the region might be helpful. Overall, the lessons learned from Cold War summitry (and its later reassessment) or of the negotiations with Iran may provide stepping stones on a roadmap towards peace.

In the past, the role of the EU and its member states was limited to supporting existing initiatives, with little stakes in the actual negotiations. In 1997, the European Atomic Energy Community (Euratom) joined the Korean Peninsula Energy Development Organization (KEDO) and was represented on its executive board. The organization was a means to implement the so-called Agreed Framework of 1994. This included the freezing of the Yongbyon Nuclear Scientific Research Center and the construction of two nuclear plants with light-water reactors.

Besides this major initiative, over the years, individual European governments, civil society organizations and think tanks have been involved in facilitating track dialogues aiming to reinvigorate official talks and in keeping doors open. Hopes, however, for North Korea to establish formal diplomatic relations with EU and open a permanent mission in Brussels were frustrated. Still, a range of European countries maintains diplomatic missions in Pyongyang, including Germany, Sweden, Poland, Switzerland, the UK, France and Romania.

In the past, policy towards North Korea has been pragmatic, focusing on “critical engagement” combined with the support of sanctions meant to uphold the international non-proliferation regime. Generally, EU foreign and security policy depended on US policy, and all too often interactions with North Korea only followed directives from Washington. Today, with growing differences on international issues such as the handling of the Iran deal and a gradual reshaping of the international order, the EU needs to assume a more independent role and develop instruments for dealing with global challenges. An independent diplomatic strategy towards Asian security in general and the Korean Peninsula in particular is needed. This requires pragmatic policies that meet existing trends and challenges – and do more than just reiterate general principles.

Points of departure on the peninsula

The current situation on the Korean Peninsula involves a whole range of diplomatic challenges that are relevant for the EU, both in terms of regional stability and as entry points for cooperation.

First, the overall security situation in Northeast Asia remains uncertain, as there is no status quo that would regulate security relations among key countries in the region. During the Six Party talks it was proposed that this format might be the basis for long-term regional security cooperation. Although the talks did not lead to the desired results the need for closer cooperation in the region remains. In view of a peace process on the Korean Peninsula and eventual denuclearization, North Korea’s key demand will be viable security guarantees.

Yet such guarantees are only truly possible, if regional uncertainties about alliances, great power competition and unresolved historical animosities are being dealt with in a more formal manner than has been the case so far. Promising approaches, such as the South Korean Northeast Asia Peace and Cooperation Initiative (NAPCI), are a starting point for cooperative security in the region – and to succeed they need international support.

Second, the issue of security guarantees as a precondition for any path towards denuclearization on the Korean Peninsula has widely been underestimated. Viable solutions would need to involve measures that are clearly reciprocal (“action for action”), and that gradually build security, both in terms of perception (confidence) as well as on a technical level. After the experiences of Libya and Iraq and the recent US withdrawal from the Joint Comprehensive Plan of Action (JCPOA) with Iran, the prerequisites for building trust are not ideal. A strict process with a roadmap that involves clearly defined measures and mechanisms could help building security. However, thus far there has been a lack of concrete concepts that would be suitable for two countries, such as the US and North Korea, which are militarily very unequal.

Third, if the peace process results in denuclearization, the technical details of decommissioning nuclear facilities and technologies at this stage of development are complicated. Beyond freezing programs and allowing verification mechanisms this would require capacities for negotiations and for practical implementation. Thus far this is lacking.

What can the Europeans do?

When South Korean President Moon Jae-in gave his Berlin Speech in early 2017 he sent a clear message. The presidency would be dedicated to serious inter-Korean rapprochement, and for this political support from Germany and the EU would be needed to strengthen the role of the two Koreas in any future process. Indeed, if there were to be any success, the most pragmatic way forward would be for the two Koreas to gain center stage and shape the peace process themselves. By contrast, the chances that direct negotiations between the US and North Korea will result in a detailed peace process are slim. To re-enter negotiations with nothing but the absolute demand for denuclearization in return for concessions will not suffice to satisfy the needs and interests of any side. If this happens, Seoul will be in a weak position vis-à-vis Washington, and strong diplomatic support from the EU and key member states will be very helpful.

The history of the Cold War in Europe and of the Helsinki process provides key examples for how to build security and trust. However, based on this experience new concepts need to be developed – concepts that suit the very specific situation on the peninsula, namely, a small country facing a global power; an outdated armistice agreement that can no longer uphold the status quo; a non-existing regional security architecture; and a situation, in which there is only a thin line dividing dialogue from further escalation. Drawing on lessons learned, expertise in support of a peace process – including new types of measures – need to be developed in order to achieve a sustainable peace treaty that may replace the Armistice Agreement of 1953. At the same time, new approaches need to be found for how to guarantee the provisions of a peace treaty, and, most likely, that will have to happen at the level of the United Nations.

In the course of negotiations with Iran, Euratom has gathered in-depth knowledge on how to proceed with decommissioning nuclear facilities and technologies. This knowledge is crucial for capacity building in the Koreas and for setting up the peace process. Here, the EU can play an important role in providing support to a key aspect of the peace process.

In the long run, EU companies and projects can assist South Korea in building economic corridors connecting Northern and Southern industrial hubs. As soon as economic sanctions become redundant, there will be great potential for investment in North Korean Economic zones – and with it will come a large degree of decentralization in the country.

The EU should seek closer cooperation with South Korea in order to fulfill its greatest potential, namely, to settle the conflict on the Korean Peninsula sustainably and help build a security architecture in the region that is more predictable and cooperative. For this to happen, new diplomatic tools for international mediation and conflict resolution need to be developed, tools that will complement traditional approaches such as sanctions and the reliance on international norms. Although North Korea is not a top priority on the European security agenda, it may become a test case for the EU’s ability to get involved in international diplomacy and provide alternatives that help settle conflicts in ways other than militarily or by means of economic sanctions.

Analysis
After several years of fast acceleration in North Korea's missile and nuclear program, this year the Democratic People's Republic of Korea put on the brakes, pursuing instead a “charm offensive”.
By Mark Fitzpatrick

The US and its allies have engaged in efforts to stop North Korean nuclear program at least three times, every time ending up with a sense of betrayal. Now, it has become clear that North Korea did not really have the intention to abandon its nuclear program.
By Nobuyasu Abe 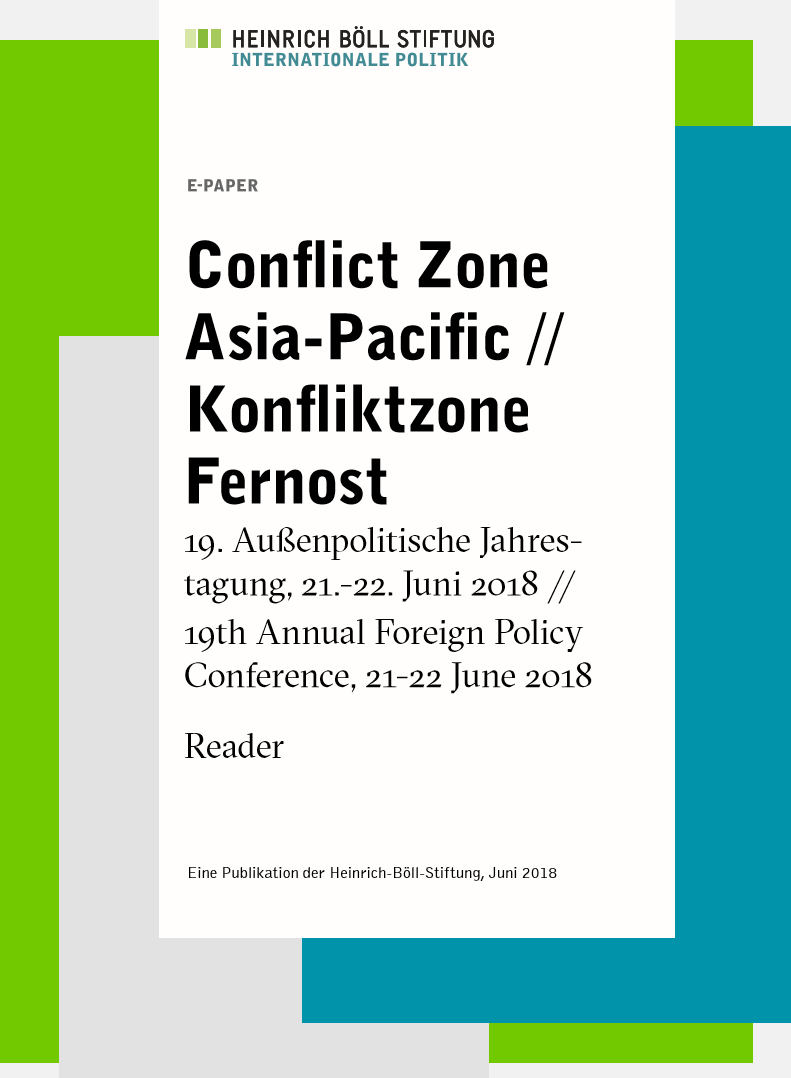