The path going forward is clear: For road vehicles, electricity and alternative fuels will soon replace gasoline and diesel. The climate protection potential of this move is high, but some problems still need to be solved along the way.

At the beginning of the automobile age in the 1880s, various drive technologies competed with one another. Manufacturers used both electric motors and combustion engines in their vehicles. Around 1913, Henry Ford revolutionized car manufacturing by introducing assembly line production. Ford, and most of the rest of the industry, used gasoline engines. Oil was abundant and cheap – a decisive advantage for the internal combustion engine.

Today, its potential has been all but fully realized, with an overall efficiency of 35 percent for gasoline and around 40 percent for standard diesel engines. “Overall efficiency” refers to the proportion of energy used that is converted into the movement of the vehicle. The impact on health and the environment from the exhaust gases of cars burning diesel and gasoline is high – in some places higher than permitted. Stricter requirements for climate protection and global competition are prompting manufacturers to invest more in electric vehicle technology.

For road use, these include battery-powered vehicles with electric motors, as well as so-called plug-in hybrids – vehicles with two drive systems, both a conventional internal combustion engine and fuel tank, as well as an electric motor with a battery that can be charged using AC power (hence “plug-in”); other hybrids charge their batteries using braking energy. Plug-in hybrids are considered to be a transitional solution between the internal combustion engine and a purely electric car. Another drive technology is the fuel cell, in which the electricity for the car is generated from a reaction of hydrogen and oxygen. 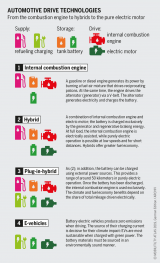 The use of synthetic fuels – so-called e-fuels – is controversial. In these products, water is broken down into hydrogen and oxygen; the addition of CO2 turns the hydrogen into methane. The final fuels, which are obtained through further processing, are chemically identical to conventional gasoline, diesel and kerosene, and can thus be used in internal combustion engines.

What are the pros and cons of the various systems? The use of electrical power directly without intermediate steps is the most efficient. The overall efficiency of an electric car is around 69 percent, as compared to around 26 percent for a car with fuel cell technology. An internal combustion engine burning synthetic fuels only reaches around 13 percent. The values for fuel cells and synthetic fuels are so low because a great deal of energy is lost in the conversion processes: An internal combustion engine running on synthetic fuels requires five times as much electricity for the same distance as an electric car.

E-fuels are currently only being produced on a laboratory scale, and will not be available for general use in the foreseeable future. Because of the vast amounts of electricity required, synthetic fuels – as well as hydrogen for fuel cells – will tend to be produced in sunny regions in the future. The demand for green power is growing everywhere. Electricity-based fuels should therefore only be used in applications that do not have climate-neutral alternatives: These would include intercontinental air travel, as batteries would be much too heavy for use in aircraft. Experts agree that synthetic fuels will always be more expensive than either electrical power used directly or conventional fuels. Either way, the production of synthetic fuels should be subject to strict, effective sustainability criteria and close monitoring. Germany does not yet have an import strategy for e-fuels.

According to the Paris Agreement, the transportation sector must become climate-neutral by 2050. The electrification of passenger and freight transportation on land, water and in the air could increase the electricity demand from today’s 600 terawatt hours (TWh) by an additional 540 to 900 TWh by 2050. The production of green power – currently 216 TWh – must be increased rapidly and the grid upgraded to handle the much higher demand.

Electric cars have a range of several hundred kilometers. Most people drive less than 60 kilometers a day, so the currently available range is enough for day-to-day commuting. Cars can be charged at work and at home. This takes two to six hours at a modern wall charger and eight to 14 hours using a regular household outlet.

On average, a fast charging station can be found every 60 kilometers on European motorways. Coverage varies from country to country. In central and southeastern Europe it is not yet adequate for driving long distances. Numerous websites and apps can be used to find charging stations in Europe.Finally, fuel cell vehicles not only have a low overall efficiency, there is also a lack of a hydrogen infrastructure throughout Europe. The refueling process for 500 to 800 kilometers takes only about three minutes. However, a mere 70 hydrogen filling stations are currently available in Germany, and their number is increasing only slowly.

Experts consider hybrid vehicles to be transitional models. They will become obsolete as soon as the range, charging time and charging station coverage issues of electrical vehicles have been solved.

Aid organizations – but also opponents of the transition to renewable energy – have been speaking out against human rights violations and environmental destruction.