ENI and the exploration of oil

The government first signed agreements with Italian oil major ENI for a new three billion dollars investment in May 2008. ENI announced that it would begin exploration of a bitumen resource estimated (by ENI) at 500 million barrels risked and 2.5 billion unrisked.  It is still unclear whether this is an accurate assessment of recoverable resources.

The huge 1,790 km square tar sands concession covers two areas, Tchikatanga and Tchikatanga-Makola, and includes savannah, tropical rainforest and wetlands that are home to endangered bird species. It borders a national park described by the government as the “most ecologically diverse habitat in Congo”  and encroaches into the UNESCO-recognized Dimonika biosphere.

RPDH and JPC-PN, supported by international partners, have been monitoring the proposed investment since 2009. They are concerned about lack of information and understanding about the project on the part of local communities but also, given the lack of transparency, that the government may not have an accurate understanding of its potential environmental and social impacts.

ENI had stated publicly that the tar sands exploration would not take place on rainforest or other areas of high biodiversity or involve resettlement of people but research revealed ENI’s own (unpublished) estimates that the tar sands zone comprised 50 to 70 percent rainforest and other highly environmentally sensitive areas. Field research also established the presence of communities within or near the main exploration sites, with communities complaining about the impacts on their land of seismic and sampling activities.

Local organizations, on the other hand, report communities complaining about the impacts of the quarrying on land and water sources, as well as concerns over the health impacts of bitumen storage. There is also ongoing concern over inadequate compensation for damage done by exploration and quarrying activities to communities’ property and livelihoods.

In terms of extraction techniques, ENI also states that “the operational techniques being considered exclude open-cast mining and the creation of tailing ponds, both of which are considered to have a high-risk impact and both of which are used in oil sand operations in Canada”. However, this does not rule out the use of in situ techniques used in Canada. On average, in situ projects “contribute more to climate change and acid deposition per barrel of bitumen produced than oil sands mining” and they may have larger environmental impacts overall than mining.

The history of oil production in the Republic of Congo does not provide an encouraging scenario for future tar sands extraction. Testimonies by communities impacted by oil report intimidation by both the government and the oil companies:

Equally in the area where ENI currently operated the M’Boundi field, villagers complain of mistreatment and that the company has ignored their complaints about health problems and contaminated water as a result of gas flaring: 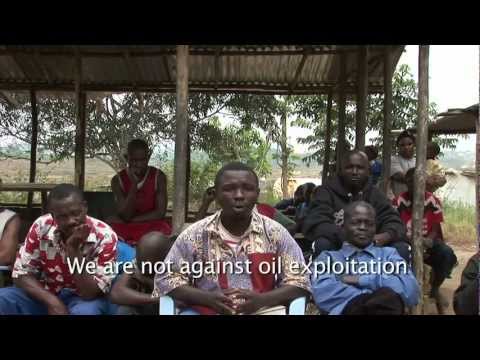