To limit the damage that insect pests  cause to crops, we call on their natural enemies – mostly other insects.  Biological pest control is all the more successful if diversity is higher.

Cereals, potatoes and roses: all types of crops, vegetables and ornamental plants, in ﬁelds, greenhouses and gardens, may be attacked by insects. They gnaw away at leaves, stems and roots, suck out sap, and transmit diseases. They may cause huge losses in yields. For the three most important cereals – maize, rice and wheat – losses due to insects are estimated at between 5 and 20 percent worldwide, depending on the region and crop type.

While the damage in Europe and North America tends to be lower, hotter regions in Africa and Asia are more seriously affected. Wheat is less vulnerable than maize or rice. In Nigeria, for example, maize famers suffer losses of up to 19 percent, while their counterparts in the United States lose only 6 percent of their crop. These ﬁgures may rise in the future: climate change may allow pests to reproduce more quickly in temperate areas.

Plants that are stressed by heat are more susceptible to pests and diseases. While some pests, such as aphids, whiteﬂies and thrips, attack many types of plants, others prefer only certain plant species. These plants lend their names to the insects that live on them: rape pollen beetles, Colorado potato beetles, European corn borers. These pests can cause huge damage, and may even wipe out a complete crop. Swarms of locusts repeatedly devastate huge areas: most recently in June 2019 on the Italian island of Sardinia, in 2017 in Bolivia, and in 2016 in Russia. 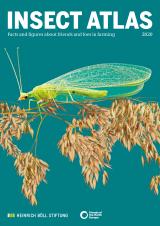 There are various ways to reduce the numbers of insect pests and keep damage to crops to a minimum. Integrated pest management, which is based on recommendations by the Food and Agriculture Organization of the United Nations (FAO) dating back to the 1960s, proposes combining prevention with control. It relies on natural mechanisms, for example by encouraging the natural enemies of the pests. Insecticides should be used only if the infestation has exceeded a threshold level.

Even then, the use of chemical applications should be restricted to the minimum necessary amount. Integrated pest management is the guiding principle for crop protection worldwide and was enshrined in the European Union’s crop-protection legislation in 2009. To protect crops without resorting to pesticides, farmers use crop varieties that are adapted to the local climatic and soil conditions, plant them at the appropriate times and in various ways, and control pests by organic means.

In line with the integrated pest management approach, they use beneﬁcial insects – the natural enemies of the pests. A typical species of pest has between 10 and 15 natural enemies. These enemies eat the harmful insects, suck out their body juices, or parasitize them by laying their eggs on, or inside, them – which eventually kills the unfortunate host animals. Some of these natural enemies specialize on just one or only a few pest species; others can feed on a wide range of different insects.

Ladybirds are among the best-known beneﬁcial insects. Both the adults and the larvae are predators: they feed on aphids, leaf beetles, rape pollen beetles, whiteﬂies, potato beetles, and many other species. A single ladybird can consume around 50 aphids a day, or up to 40,000 in its lifetime. In 1888, the vedalia beetle, Rodolia cardinalis, an Australian ladybird, was introduced in California to control cotton cushion scale insects, a pest that was decimating citrus orchards.

The introduction of this ladybird saved citrus cultivation in the United States. In addition to predatory beetles, various species of bugs and ﬂies eat large amounts of pests. A lacewing larva, for example, can consume up to 500 aphids during its 2- to 3-week lifespan. For this reason, they are often released in greenhouses. Many species of ichneumon wasps are valuable beneﬁcials used in pest control. They parasitize eggs, larvae and adult insects.

However, releasing beneﬁcial insects in a ﬁeld of crops is not enough. Field margins, conservation strips, hedges and other near-natural refuges are indispensable starting points for biological pest control. To encourage as wide a range of natural enemies as possible, a mix of newly established and existing landscape elements is necessary. Crop rotations and crop management that take the life cycles of the beneﬁcials into account are also helpful. Part of the area should not be cultivated, and the soil should be worked sparingly, because many types of insects overwinter beneath the surface.

To promote beneﬁcial organisms adequately, ecologists recommend the creation and linking of near-natural habitats for at least 20 percent of all landscapes. Politicians are responsible for creating economic incentives for more nature-friendly land management, for adopting cross-regional agri-environmental and climate policies, and for prioritizing the availability of the funding. Individuals and communities can also promote beneﬁcial insects and reduce pest populations, literally on their own doorsteps: by maintaining greater diversity in gardens and by providing nesting opportunities for insects, birds and bats.