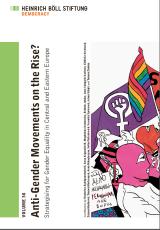 Anti-Gender Movements on the Rise?

The concept of "gender backlash" encompasses too activities pursued by a multitude of different local initiatives all over Central and Eastern Europe, which strongly promote tradition over equality. In many cases these groups appear to be backed and inspired both by influential US-American “pro life” organisations as well as the Kremlin’s "Gay-rope" propaganda, which aims to discredit the European Union as a place of moral decline.

Import/Export Democracy: 20 Years of Democracy Assistance in Eastern and Southeastern Europe and the Caucasus Region

Publication Series on Democarcy 14: After 1989 in Eastern and Southeastern Europe and the Caucasus, two aspects played and still play a key role in determining whether a political system exhibits merely a democratic façade or a truly democratic constitution: civil society and political culture, on the one hand, and the influence of ethnic conflicts, on the other. This publication illuminates the successes and failures, the instruments and institutions, and the concepts behind two decades of external democracy promotion.