The ongoing drama concerning North Korea has seen so many plot shifts of late that it puts cheap novels to shame. After several years of fast acceleration in its missile and nuclear program, the Democratic Peoples’ Republic (DPRK) this year put on the brakes, pursuing instead a “charm offensive”.

After meeting almost no foreign officials during the first six years of his reign, leader Kim Jong-un opened the door to South Korean senior officials on March 5 and passed an offer to meet with US President Donald Trump, which was accepted on the spot. Kim then traveled to China for the first time to confer with Chinese President Xi Jin Ping, twice, and met Republic of Korea (ROK) president Moon Jae-in, again twice. On May 24, after an exchange of boasts and insults, Trump called off his summit with Kim, which had been scheduled to be held in Singapore on June 12, only to voice another change of mind two days later. As this paper is being submitted in late May, it is difficult to anticipate what other dizzying developments may ensue.

However the summit turns out, the last act in the drama is far from being staged. The unprecedented meeting between the US and DPRK leaders will spawn eye-grabbing headlines and, surely, pronouncements of triumph. Yet the real success of the summit will be judged over time, as lofty agreements on denuclearization are translated into actionable steps and the minutiae of implementation. Let us hope the process does not break down, as happened over several years with the 1994 Agreed Framework, over several months after the 2005 and 2008 agreements under the Six Party Talks and over mere days after the 2012 Leap Day Deal.

At their April 27 Panmunjom Summit, Kim and Moon declared the goal of a nuclear-free Korean Peninsula “through complete denuclearization.” This was little more than an aspiration, akin to the goal of nuclear disarmament in Article VI of the Nuclear Non-Proliferation Treaty. Who knows when it will eventuate? “Perhaps not in my lifetime,” said President Barack Obama, speaking about a nuclear-weapons-free world, in his April 2009 Prague speech.

For the United States, denuclearization of the Korean Peninsula means “complete, verifiable and irreversible dismantlement” (CVID) of the North Korean nuclear arsenal and related infrastructure. To North Korea, it means an end to the perceived US nuclear threat. Neither side is at all prepared to give what the other wants. Former insider Thae Yong Ho, who in 2016 defected as DPRK’s deputy ambassador in London, argued in May that CVID “will strike at the core of North Korea’s power structure. North Korea will not accept CVID that does not ensure the security of the regime.” The United States, for its part, has no nuclear weapons in South Korea, but would retain multiple nuclear strike options no matter what arrangements are made concerning deployment of forces in the Korean theater.

Disputes over verification are what sank the last effort to dismantle North Korea’s nuclear weapons program. Destruction of the cooling tower of the plutonium production reactor in late June 2008, filmed live by Western media, was hailed as a seminal step toward DPRK disarmament. Yet, three months later, talks unraveled over North Korea’s refusal to accept US demands for verification, which included “full access to any site, facility or location” deemed relevant to the nuclear program, including military facilities. Given that one of the forces behind those verification demands in 2008 is current US National Security Advisor John Bolton, it is likely that the US would again demand full access to DPRK military sites during the implementation process that follows any Kim-Trump summit.

Not long before he joined the White House, Bolton made a legal case for bombing North Korea and argued that diplomacy with dictators is a waste of time. In his White House role, Bolton’s maximalist demands on North Korea are seen by skeptics as a strategy for sabotaging talks. In May, the DPRK lashed out at him personally for his insistence that North Korea must turn over its nuclear weapons capabilities to the United States as Libyan leader Muammar Qaddafi did in 2003. The North Koreans detest the “Libya model,” not just because Qaddafi met a gruesome death ten years later after the US turned on him, but because it implies that they have to give up their entire nuclear deterrent before receiving benefits in return.

US-DPRK diplomacy holds great promise of détente and a path toward removing the North Korean nuclear threat. It also holds great risk, in two ways. The first is that the talks could very well fail, either immediately over differing interpretations of the goal, or later, over verification disputes. At that stage, Bolton would likely argue that this proves that engagement is worthless. Trump may agree that it would be time, instead, for military action to ramp up the “maximum pressure” strategy. Even a so-called limited strike, however, would likely escalate to all-our war and the nightmare scenario of a nuclear exchange, as I gamed out in a New York Times interactive op-ed on May 24.

The second risk is that Trump will give away too much, too quickly. An isolationist at heart who has long railed about the cost of overseas bases, he, twice this year, had to be talked out of removing US troops from South Korea. A troop withdrawal might be a reasonable quid pro quo for CVID and an end to other North Korean threats, but offering it up front confounds US allies in northeast Asia. It signals a loosening of US alliance commitments and gives South Korea and Japan reason to reconsider their security dependency on the United States.

Protected by the "nuclear umbrella"

In Northeast Asia as in Europe, US security alliances have worked well to keep the peace. US extended deterrence has also served non-proliferation goals. As long as Japan and the ROK felt protected by the United States, including by its “nuclear umbrella,” they had no need to consider nuclear armaments of their own. When the US commitment has seemed to waiver, however, allied security planners have had to reconsider their options.

In South Korea’s case, security fears and concern over US abandonment led President Park Chung-hee to actively pursue nuclear weapons in the 1970s. The effort was launched after President Richard Nixon’s 1969 declaration in Guam of a new policy of shifting the burden of Asian allies’ conventional defense to the countries themselves. Two years later, the US abruptly withdrew its Seventh Infantry Division from South Korea amid calls in Congress for additional withdrawals. Park did not get far with his efforts to procure plutonium-reprocessing equipment before the US intervened to stop it. But the November 1976 election of Jimmy Carter, who during the campaign had pledged to withdraw all US troops from South Korea, prompted Park to resume the secret nuclear program.

Park’s assassination in October 1979 ended the second effort. His successor Chun Doo-hwan, who seized power via a military coup, needed the legitimacy provided by friendly relations with the US and thus did not continue the nuclear program. By this time, Carter had scrapped his plans to withdraw troops and tactical nuclear weapons from South Korea. The Reagan administration, which came to power in 1981, then provided a reinvigorated security guarantee. In the years that followed, South Korean scientists dabbled in uranium-enrichment and plutonium-separation experiments and officials repeatedly sought US approval for sensitive nuclear technologies like the ones Japan was allowed to possess.

Today, opinion polls in South Korea show sustained popular support for the idea of indigenous nuclear weapons, driven by a sense of despair that the US failed to prevent North Korea from obtaining them. Yet successive governments have maintained the ROK’s non-proliferation pledge under the NPT, knowing only too well that nuclear weapons would bring more trouble than benefit. I explained these dynamics in a 2016 book, entitled "Asia’s Latent Nuclear Powers: Japan, South Korea and Taiwan".

Post-war Japan has never gone down Park Chung-hee’s path of actively seeking nuclear weapons, but it has a quasi nuclear-hedging strategy in the form of uranium enrichment and plutonium-reprocessing technologies. At least five times over the last 50 years, the Japanese security establishment undertook studies to assess the costs and benefits of having their own nuclear weapons. Each time, the studies were undertaken in response to a changed security environment, including China’s nuclearization and, later, the end of the Cold War. Each study concluded that going nuclear was neither desirable nor necessary as long as Japan could rely on the US defense commitment. Quietly leaking the assessments typically served to encourage the US to reaffirm its extended deterrence commitment.

The most important factor affecting Japan’s continued non-nuclear posture is the credibility it places in US extended deterrence. Credibility is a highly subjective criterion, depending more on perceptions than reality. On the campaign trail in 2016, candidate Donald Trump’s disparaging comments about Japan and South Korea undermined the confidence allies had about US willingness to come to their defense. His off-hand remarks played directly into North Korea’s decoupling strategy. As president, Trump generally has stuck to scripted US policy on extended deterrence. Yet there have been notable lapses, such as when he purposely failed to reaffirm the NATO Article V commitment when speaking at NATO headquarters in Brussels in May 2017.

What withdrawing US troops would mean to East Asia

Musing about prematurely withdrawing US troops from South Korea is another such lapse. It stimulates security concerns not just in the ROK but also in Japan, which then would become the only nation in East Asia to permanently host US forces. A withdrawal of US forces while North Korea retains its nuclear arsenal and China’s continues to grow would leave Japan feeling exposed and worried that US troops there would be next.

Japan will not easily be propelled down a nuclear-weapons path. A so-called “nuclear allergy” remains deeply rooted in the Japanese psyche. While Japan may have the technical capability to build rudimentary nuclear weapons in as short as a year, overcoming societal and legal barriers would probably prove to be more challenging unless stimulated by a rapid deterioration of Japan’s security environment. A failed US-DPRK summit and resumption of North Korean missile testing could be one such shock. A hasty US retreat could be another.

Putting in place lasting solutions will take a sustained effort

All parties should maintain a steady and patient posture and keep their eyes on the goal of a secure and peaceful Korean Peninsula. One-day summits can make for dramatic turning points, but putting in place lasting solutions will take a sustained effort. A diplomatic framework is needed that provides for reciprocal steps toward denuclearization and a sustainable peace. Meanwhile, it will be important for the United States and other parties to support ROK President Moon in his peaceful quest, because it is his nation that will bear the greatest burden if diplomacy sours and is supplanted by military options. 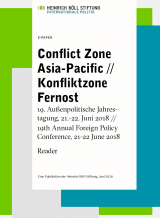 Article
In July 2017, the U.S. Congress overwhelmingly passed additional sanctions against Russia, Iran, and North Korea. What was the response from Russia and Germany? How are U.S. lawmakers addressing European concerns?
By Dominik Tolksdorf

President Donald Trump declared that he would start measures to withdraw the United States from the Paris Climate Agreement, putting his country back into the “rogue state” category in international climate negotiations.
By Liane Schalatek and Nora Löhle