How is Brexit going to affect women's rights in the UK? Jennifer Cassidy offers an overview of future risks.

The month is November 2019 and Brexit, Boris Johnson, and the Backstop, are never far from the headlines. Be it the headlines of the British media, Europe’s media, or the international news channels flashing around the world’s screens. All sources are eager to report on each new development at play. Developments in, what has been called by many scholars and practitioners alike, one of the biggest political and economic crises in British history. It seems justified to state that you cannot scroll through your Twitter feed, turn on your television screen, or pick up your local newspaper without playing witness to the imploding of the once most powerful Kingdom on earth. A Kingdom which not long ago possessed enough economic power and military might to conquer large parts of the globe, and which would loudly claim to all who wished to listen that they had an Empire ‘where the sun never sets’.

But with each new passing headline, every new article title aimed to draw the reader in, and in all the subsequent debates at both the domestic and regional level, the issue of gender has been notably absent. Absent in political discourses, media discussions, and even community-based discussions. Many of which I have attended, standing disappointed, but unfortunately not surprised at the lack of discussion on Brexit’s impact on women. Notably on their rights, welfare, and social justice. But how will they be affected? What will be the tangible implications for women’s rights and their welfare if Brexit is to come into force – Deal or No-Deal – at some point? Let’s begin.

The European Union (EU), with its legislation enshrined in a series of regional mandates, guarantees rights to women and men to equal pay, maternity leave, and to workplaces safe from harassment. The EU is known to have the best legislation for women and girls in the world. Take for example the EU Directive on pregnant workers that assists and protects mothers in the workplace. While much of this very legislation has been integrated into UK domestic law, there is a risk that such legislation will be reversed by the current or future governments. Furthermore, a sizeable portion of funding for women’s services currently comes from the EU, funding that will cease after Brexit, Deal or No-Deal. Indeed, a study by the University of Surrey goes as far as to argue that Brexit is one of the greatest threats to women's rights. It is imperative to highlight this in the context of the UK deciding to exit the regional bloc because the UK has an enduring record of putting up a fight against accepting EU measures promoting gender equality. A harsh statement to make perhaps, but it is not penned unfounded. Brexit, in particular a No-Deal Brexit, would place these hard-earned rights at the feet of the current Conservative government and indeed, the whim of future governments without the protection of the regional bloc, shared regional mandates, and the European international court.

While such predictions or even prophesies regarding the possible future and implications for women’s rights and welfare due to Brexit’s implications may seem like hyperbole for some, they should not be taken lightly. Jenna Norman, a feminist activist and campaigner for Women for a People’s Vote, states that while it “might seem unlikely that the UK would turn back the clock on gender equality…a glance across the pond shows just how easy it is for populist misogyny to gain national credence. This is not the time to be gambling with women’s rights”. I, like so many others, would stand with her regarding these sentiments.

Austerity and Women: A Relationship of Unfortunate Essence

Without question, Brexit will lead to poorer economic growth at best, or worst a deep recession. Estimates from the Bank of England and the European Central Bank have predicted that the slowing of UK economic growth could range from GDP contracting by 1.2 percent in 2019 to its domestic economic growth being worse off by 3.9 percent in 15 years’ time. Again, this is imperative, not simply because austerity impacts the whole of a society, but because we know from the last recession a decade ago, women were hit harder than men in the UK. A report released in 2018 by the Women’s Budget Group and the Fawcett Society, another organisation that promotes gender equality, said that most economists believed Brexit would lead to a downturn in gross domestic product and likely “result in further cuts to government spending which will have disproportionate impact on women, especially the most vulnerable and disadvantaged”. Already, the report said, “the process of Brexit is diverting political attention and increasing levels of public resources away from urgent social issues such as the crisis in social care, housing and economic inequality, all of which disproportionately affect women.”

A further and prominent academic study, led by Hélène Périvier, which analysed the gendered impact of the 2008-9 financial crisis, shows that austerity measures in the UK targeted the social services sector, education, and social security – leading to worse consequences on the economic position of women relative to men, as women are the main users of these services. As Jenna Norman again so succinctly puts, if “austerity has taught us anything, it’s that when money’s tight it is women – particularly ethnic minority women – who suffer the most”. Furthermore, we are aware that across the United Kingdom and indeed, Europe as a whole, women are overrepresented in sectors at high risk from economic downturn, including care and retail. Analysis from the Women’s Budget Group has shown that 1 million women’s jobs are at risk even with Theresa May’s Brexit deal, let alone a No-Deal Brexit. 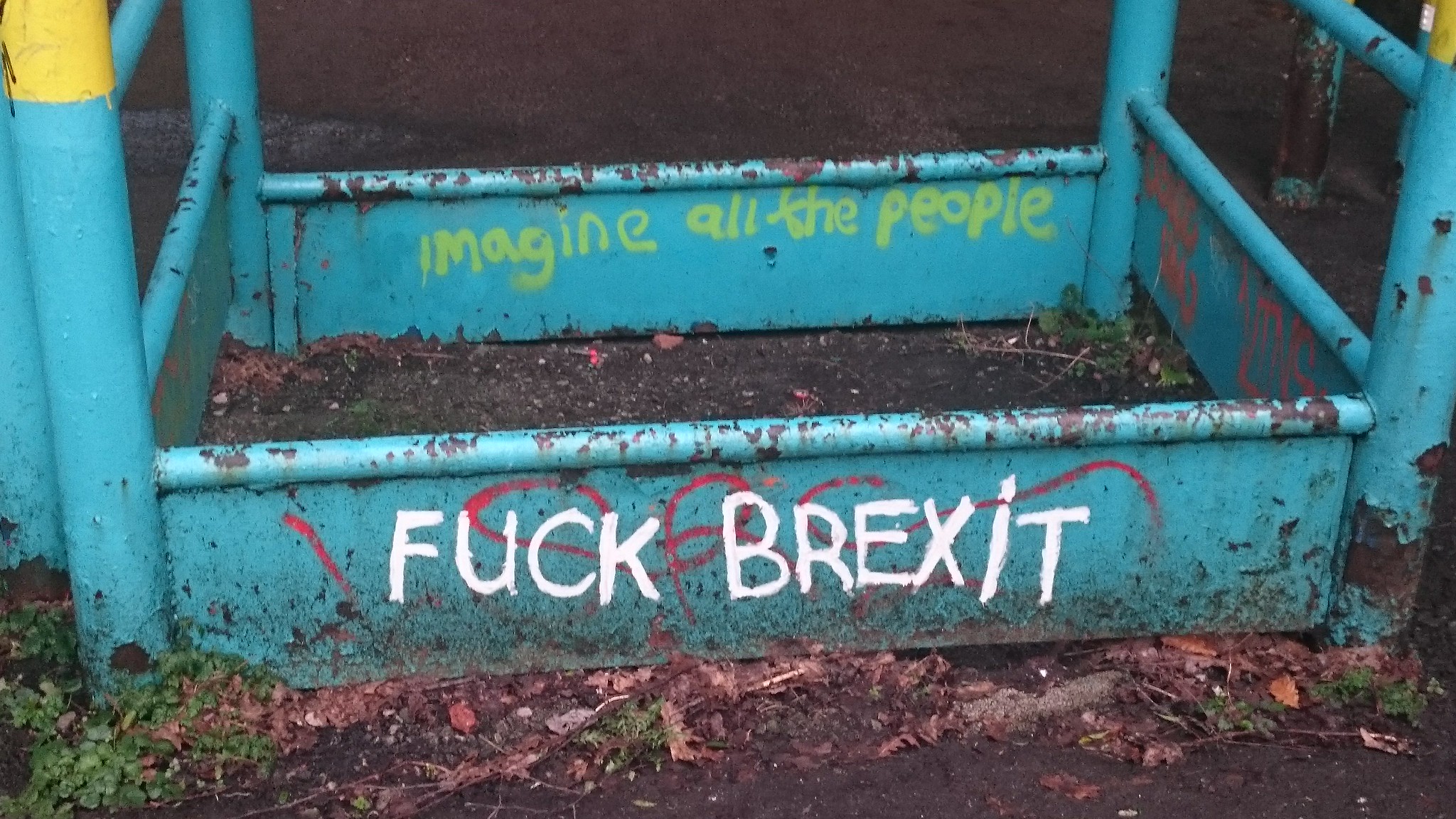 Marissa Conway reflects on the announcement of Boris Johnson as the UK’s new Prime Minister and how this change in leadership is unlikely to mitigate the threat Brexit presents to human rights and feminist policies. More...

While discussions about the implications for women’s rights and welfare in Northern Ireland may seem of no importance for some, they should not be forgotten. Brexit would bring an end to EU funding, such as the European Structural Fund, which has been vital in enabling the work of women’s civil society organisations in Northern Ireland. Without these funds, education initiatives and women community programmes such as back-to-work initiatives for lone parents will likely come to an end, reinforcing the already high rate of women economic inactivity in Northern Ireland. Similarly, EU funds have played an important part in sustaining women’s initiatives in support of survivors of sexualised and domestic violence that have been crucial for many women in the post-conflict society of Northern Ireland. Moreover, much of the work done by women’s civil society groups, such as cross-community initiatives and grassroots peace projects, have been instrumental in support of the peace process; the majority of which is now at risk of being ended because of a lack of funding at a time when tensions – because of Brexit – are rising again, fortifying the risk of destabilisation and violence in Northern Ireland.

Women’s Rights: On the margins of the political debate

The impact on women’s rights due to Brexit and its impending implications on British society continue to remain side-lined on every level of debate. Side-lined is perhaps a too diluted term – one could justifiably state that these discussions were silenced completely, in countless domestic and regional parliamentary debates and negotiations. A silence that has remained consistent for the past three years across all Brexit negotiations. Now, I must say unequivocally, there are countless working groups, politicians, non-governmental organisations, and journalists who have relentlessly, enduringly, and morally sought to highlight, and continue to highlight the implications on the livelihoods, professional life, family life, and welfare of women and for women in the event of Brexit (Deal or No-Deal). Their workings and findings are not highlighted by primary media sources. As noted by the phenomenal writer and poet Rupi Kaur:

So, how to proceed? With each word, the clock is ticking. We know, simply from the three key points I have highlighted here (there was a plethora to choose from), that Brexit poses intense and tangible risks for the interactions between the different levels of institutional and civil society actors in the field of women's rights and welfare. As the Gender Five Plus report entitled Gendering Brexit, The Role and Concerns of Feminists, and Women’s Rights Organisations states, the dangers of Brexit for women “are occurring against the backdrop of a reduction of influence of women’s organisations and attention paid to women’s rights and equalities issues by the Conservative Government. In such a context, Brexit could place women’s organisations in double jeopardy from a loss of funding and an increase in demand from dependents, with a knock-on effect on their capacity for political participation and advocacy when rights acquired under EU jurisdiction and further progress of gender equality could be challenged”. Gender Five Plus puts forth the recommendation, in which I stand firmly in line with, “that the legislative and political consequences of Brexit require a strong civil society sector to advocate on behalf of women, specifically minority and vulnerable women”. Therefore, the challenge of untangling and unravelling the UK from decades of EU membership is not just about the legislation. It is not just about economic might, who gets the best trade deals, the need to not lose face, the insistence on taking back control. It is also about what the women of the United Kingdom, including the women of Northern Ireland, will lose in terms of collaboration: the networks, the shared projects on violence against women, the ideas that emanate from the vibrant feminist movement at the heart of the EU.

I would like to conclude with the words of Mr. De Gasperi, the Italian Prime Minister from 1945-53, and a deeply committed founder of European integration and the democratic ideals it sought and seeks to promote. His view of integration is succinctly written in the florid prose and not to be forgotten by the history books. He writes: “The future will not be built through force, nor the desire to conquer, but the patient application of the democratic method, the constructive spirit of agreement and by respect for freedom”. The pervasive nature of these words demonstrates their almost universal acceptance by scholars and practitioners alike; a rare feat when it comes to malleable concepts. Concepts which are subjected to the subjectivity of the reigning political elites of the day. Indeed, the power of their echo has proven immovable and steadfast through the political and diplomatic realm. From National Ministries of Foreign Affairs, to individual European Institutions at the heart of Brussels, to recently established global European Embassies, the commitment to these words, that is the commitment to the ideals of democracy, human rights and the rule of law, has stood the test of time, despite of the seismic and global political shockwaves recently and continuously felt throughout the world. In my professional opinion, these words, of which there are thousands echoed, remain the beating drum to which Europe continues to march.

Analysis
Marissa Conway reflects on the announcement of Boris Johnson as the UK’s new Prime Minister and how this change in leadership is unlikely to mitigate the threat Brexit presents to human rights and feminist policies.
By Marissa Conway