Dreaming of freedom and working towards it

The film “They Also Had Dreams. Dagestan Women Tell about Their Lives” is dedicated to Aishat Magomedova, who devoted her life to the betterment of Dagestani women. The gynaecologist established one of Dagestan's first non-governmental organisations, the League for the Protection of Mothers and Children. Also she founded the Charity Hospital for Women, that was led, staffed and equipped by Aishat Magmedova for over 15 years. The film is in Russian with English subtitles.

“Why do women have to carry heavy loads on their backs? Why don’t you men help them?” Aishat Magomedova asks a young man who lives in a village in the mountains of Dagestan, her tone friendly but determined. “Men don’t do that. It’s just the way things are”, he answers, smiling. Aishat Magomedova does not back down: “But how can you change it?” “You can’t change it,” the young man responds, “it’s impossible – because that’s our heritage”. 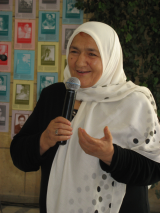 Aishat Magomedova echoes his words, in a pensive but still pleasant tone: “Heritage, it is but it’s hard for women. They give birth, they have it hard, don’t they?” The man gets in the last word: “Our women are strong”.

The dialogue is from archival recordings, probably from the 1990s, which filmmaker Alesandr Fedorov incorporated into his moving documentary  “They Also Had Dreams. Dagestan Women Tell about Their Lives”.  The film is dedicated to Aishat Magomedova, who devoted her life to the betterment of Dagestani women.

Magomedova works tirelessly for the forgotten

A gynaecologist well respected in Dagestan/the Russian Federation, Aishat Magomedova headed the gynaecology department in a state hospital for several years. In the mid-1990s, she decided to work outside of state structures to provide care for people who had been forgotten by everyone else – women from the mountains of Dagestan, refugees from Chechnya and children.

Her first step, in 1993, was to establish one of Dagestan's first non-governmental organisations, the League for the Protection of Mothers and Children. A year later, the Ministry of Health suggested that the League should take over the remains of what had once been a paediatric clinic in central Makhachkala, Dagestan's capital.

In this dilapidated building,  Aishat Magomedova and a group of like-minded individuals founded the Charity Hospital for Women, which Aishat equipped, staffed and led – for over 15 years – solely on the basis of donations from Dagestan and around the world and grants from international organisations. To honour her dedication and work, which went far beyond the medical services, Aishat Magomedova was one of the 1000 PeaceWomen around the world collectively nominated for the Nobel Peace Prize in 2005.

A place for women where they find protection and help

The women's hospital in Makhachkala was a unique facility, a place where women could find refuge, free medical care, and a respite from the burdens of their lives. Its patients were primarily women from mountainous regions of Dagestan, where health services were poor or inadequate, and refugees from the First and Second Chechen Wars.

Though it had only 20 beds, the hospital treated a total of about 6,000 women on an inpatient basis and another 40,000 as outpatients over the years. Aishat and her assistants also repeatedly made trips to the mountains or to refugee camps to see persons in distress and suffering from disease. Year after year, Aishat Magomedova managed raise enough money from donations and grants to pay for medical equipment and medicines, feed hospitalised patients and pay taxes and municipal service payments as well as pay regular salaries to doctors and nurses.

She downplayed this achievement: “It's nothing extraordinary. The Almighty helped us. Through good people.”* She found joy in the miracle of each and every new-born child, in every woman whose body and soul recovered.

The authorities and illness make it difficult for Magomedova

Aishat’s charitable institution in central Makhachkala was a thorn in the eye for some, however. Their covetous gaze was fixed on the 1,460 m2 property on which the hospital stood, whose value was increasing from year to year. In 2000, the public authorities began what would be a multiple-year attempt to wrest the hospital back from the League, claiming that its tenancy of the building was illegal. They also accused the League of having illegal contacts with Chechen fighters.

Aishat Magomedova waged a legal battle against this attempt for years – without interrupting her work in the hospital –  appearing in hearings of courts at different levels and attempting to prove that the League had been granted indefinite use of the hospital building.

At almost the same time, she herself was afflicted with various illnesses.  Unfortunately, though, rather than focusing on her own recovery, she continued to devote her energies to healing others and to holding on to her “child”: the hospital.

In 2008 that she finally realised that the time had come for her to pay more attention to her own health and entered into treatment. By late 2009, she had recovered enough to be able to take up her work again, though she had to restrict her activities. Despite all her efforts – after countless court hearings, meetings and media reports – the Government of the Republic of Dagestan moved the hospital to another building in November of 2009.

Aishat Magomedova did not give up though: even just a few days before her death, she was still developing new initiatives and planning joint projects, e.g. with partners from Kabardino-Balkaria. They were plans she would never realise. She died in December 2010, at the age of only 66.

A life led for a better life for all women

Aishat  Magomedova spent a lifetime using the little scope that was available to women in Dagestan’s patriarchal society to create new opportunities for women. A woman who never started a family of her own, she cared for other women whose lives were shaped by physically exhausting labour in the home and in agriculture.

She understood how to use little tricks to provide the women in her hospital with greater protection and freedom of choice than they had in their normal rural surroundings. For instance, she might tell a husband, truthfully or otherwise, that his wife was suffering from a “women's complaint” and would therefore have to stay in hospital for treatment for several days.

Taking this at face value, husband would raise no objection to his wife’s continued absence. After seeing Aleksandr Fedorov's film “They Also Had Dreams”, one understands better why it was so important to Aishat Magomedova to help Dagestani women, particularly those from villages high up in the mountains.

The film follows the traces of Aishat Magomedova

The filmmaker skilfully combines archival footage from the 1990s and old photographs with present-day footage of his own filmed in the villages where Aishat was once active. Although they now have somewhat more resources and equipment and somewhat more scope for choice and freedoms, e.g. the possibility of driving a car, exhausting physical labour continues to dominate the lives of most of the village women.

Many of them have to fend for themselves and perform most of the chores in their homes and farms alone because their husbands are either long dead or do nothing but sit around, drinking and talking about "important" topics. A potter who left her husband because he “wasn't good for anything” explains that she can do very well without such men.

In his documentary, Aleksandr Fedorov portrays many impressive Dagestani women who – despite numerous privations –are bravely living their lives and shouldering responsibility for supporting their family and raising their children. Many of the older women were unable to realise their dreams; their possibilities far too restricted by their fathers, brothers and husbands, they were pushed or forced into certain roles.

A generational change is taking place

However, the younger generation of Dagestani women is “more independent, more self-confident”, explains Malikat Dzhabirova, a former colleague of Aishat Magomedova. She says that young women now understand that education is vital to gaining independence, even if it is only financial independence.

In the film, Ravzanat Uvaisova, a Chechen refugee whom Aishat Magomedova once found and treated in a refugee camp, describes the freedom these women aspire to as what matters most for human beings. “A free person... is the happiest person of all”, she says.

She is now a teacher in a secondary school in the village of Shushanovka. For her, a free person is a person who is self-confident and educated. “And you can only feel confident of yourself when there is no violence. Verbal or physical. When you can express yourself freely, freely express your thoughts, and when people understand you.”

Aishat Magomedova would have signed on to these words, of this there can be no doubt: her care for Dagestani women was nothing other than an attempt to provide a space for them, not simply one in which to heal and rest, but one where they could live in somewhat greater freedom as well.

“She was our role model, she inspired Dagestani women to move forward”, says Malikat Dzhabirova. It is good that Aleksandr Federov's film will help preserve the memory of the life and works of Aishat Magomedova. This way she can remain an important role model and inspiration for the next generations of women, and not just in Dagestan.

Michael’s Story: Where is Your Museum? Everywhere!

In times when discriminatory and derogatory language is still a daily routine in many countries, exhibitions showcasing same-sex desire or other non-normative life paths are crucial to re-write our own history. A museum in Colombia without formal museum space offers its own contribution.
By Michael Andrés Forero Parra

Backlash in feminism - Out of reverse gear

Background
Violence against women, gender pay gap, homo hatred - the gender backlash is in full swing worldwide. That is why we need encouraging feminism.
By Jana Prosinger