Gender justice, democracy and socio-ecological sustainability are inextricably linked in both politics and economics. Barbara Unmüßig has been promoting sustainable and gender-just alternatives to current economic models for many years now. But aside from any notions of women as victims or somehow "closer to nature", what exactly are the links here? What should green policies that integrate environmental and gender justice look like today? Barbara Unmüßig, President of the Heinrich Böll Foundation, describes her experiences and offers some recommendations for policy makers in this interview with Birte Rodenberg.

The first UN conference on the environment took place 50 years ago, in 1972. The UN Earth Summit in Rio de Janeiro in 1992 was much more significant from a feminist standpoint. At the Rio+20 Conference in 2012, you argued that sustainability, environmental justice and gender justice are interrelated and should be advanced together. What exactly are the connections between environmental and gender justice in your experience? And what were the early discussions like?

Barbara Unmüßig: There's no question I've been greatly influenced by the close links women have been showing since the 1980s between environmental destruction and the way our economy works. Why is it that we're destroying nature? In connection with these debates, I also looked at ecofeminist theory and concepts because I wanted more than just the "standard" arguments that women are disproportionately affected by environmental disasters. I was interested in a gender perspective on the relationship between humans and nature on the one hand, and our theory and practice of economics on the other: what is actually inherent to a capitalist mode of production? It externalises costs, for example, and shifts them to humans and nature. This externalisation creates a gender pay gap and insecure jobs for women throughout the world, and leads especially to unpaid care work. That produces not only social injustice but also gender injustice. As such, our mode of production has a major effect on our global environment. We exploit the environment and harm it in irreversible ways. Climate disasters and the loss of biodiversity are the most visible signs of a production model that has run off the rails.

My question both then and now: can women can turn their feminist perspective and critical eye on power into new theoretical perspectives and different approaches to the economy that don't consume nature as much or destroy the environment. I was never part of the strong women's networks around the Earth Summit in Rio in 1992. But I knew what they were discussing: feminist critiques of the growth model, and the illusion that technological fixes can solve all the problems. I was always taken by the fact that women's NGOs were grappling much more intensively than environment NGOs with sufficiency issues, i.e. the less-is-better approach.

It was also both essential and new to bring women into the negotiations on a global scale. Women's networks made very good use of that at the Rio summit. Law-based approaches like calling for water and land rights and so on were discussed with a strong emphasis on gender justice. But the momentum couldn't be maintained in the years after Rio. Women's networks withdrew from environmental and sustainability matters and focused on the classic issues again ‒ women's rights, reproductive rights, equality. At the Johannesburg Sustainable Development Summit and at Rio+20, only a few women activists were still drawing links between environmental and gender justice.

What role does the "green economy" play here, which was promoted so strongly by the 2012 United Nations Environment Programme? And why is it so hard to see the social dimension in many approaches and solutions these days?

I think we've landed on a key question that has run through environmental discussions from the Club of Rome to the present. In the 1990s and well into the 2000s, debates on the environment shifted from critically examining production models to banking on technological solutions. The right question ‒ namely efficiency and its potential ‒ was framed too often in purely technological terms. The idea that technology alone can get us out of the environmental crisis prevails to this day.

In 2012 it was quickly clear that the green economy, too, is based largely on technology. The UN's Green Economy programme hardly mentioned the social dimension or an associated gender-differentiated perspective. Efforts to develop new economic models didn't consider care work at all. Instead, the solutions envisaged helped spur an enormous further monetary valorisation of nature. I took a very critical stance on this in public discussions and policy debates. With mixed success, I'd say today.

Even though the very definition of sustainability incorporates social as well as environmental and economic dimensions, debates on environmental issues have always – always! – neglected the social dimension. They have never really looked at when and why environmental crises affect people differently. Even wind farms displace local populations, often without any type of compensation. Rising prices can also exacerbate social inequalities if countermeasures are not taken.

So I'm not surprised that women are once again expected to care for nature and clean it up, while environmental and climate policy are not really formulated in gender-differentiated terms. That should have been the task after the Beijing World Conference on Women in 1995, namely to apply a strong gender perspective to all fields, including environmental and climate policy.

Women and indigenous organisations are the driving forces behind feminist perspectives at major environment and climate conferences. Which of these organisations have impressed you the most?

Wangari Maathai was very important of course. She received the Petra Kelly Prize from the Heinrich Böll Foundation shortly before getting the Nobel Peace Prize. Women around the world are fighting for autonomy, reproductive rights, education, and their livelihoods including the right to water and especially land. These aren't separate fields of policy – instead, they're closely interrelated.

That's why at the Heinrich Böll Foundation we're supporting a great many women's organisations that combine empowerment with basic rights and legal action. They're among the most impressive ones as far as I'm concerned. Especially in the Global South, I think it's not a matter of the environmental women's group, because they're always combining human rights, women's rights, empowerment strategies and awareness. It's not as specialised as it can be here.

Ecofeminism is currently being reinterpreted by the younger generation. They're no longer basing it on a binary conception of gender, but instead making the concept more fluid, and much more intersectional. Does a broader approach make it easier to integrate into policy?

Classical CO2 reduction goals don't easily admit of a gender component or an intersectional one. I don't have the magic formula here either. But I think we can demand that policy decisions take the effects into account – with a decidedly intersectional view. Who is affected by which mobility policies or climate mitigation measures, how do CO2 prices impact which social groups? We simply have to expect that weighing the consequences of technological and environmental policy decisions includes checking the social dimension. I'd say we need different decisional mechanisms that integrate different social groups.

We need to get to a place where social and intersectional dimensions carry more weight with policy makers. For example, we're having a very car-centred debate about the future of mobility, although countless studies show how differently women and men and various social groups use and need public transportation. We're just not paying attention. The knowledge is there, actually, because we've been evaluating policies from gender-specific and intersectional perspectives for a long time now. So we always have to ask for whom we are making these policies. For what and for whom? Instead, we have some type of "carbon footprint tunnel vision". Yes, we have to cut way back on CO2 emissions. But it's not just the carbon footprint ‒ we also have to see the feet.

Let's look at policy-making in Germany. The federal cabinet now has ministers from the Green Party. Where and how should their departments be linking climate and environmental justice more closely with gender justice?

It's a very positive development, of course, that we can now talk about feminist foreign policy and feminist development policy. No field of policy is gender neutral. That's why it's so important not just to have climate policy run through all the ministerial portfolios but also to really integrate gender democracy in all of them. That means keeping an eye on policy effects, and ensuring the right to participate. Feminist foreign policy has helped us understand that peace, conflict resolution and prevention can only work if women are involved, and we also have to incorporate gender justice everywhere else. In agriculture we should obviously be looking at land rights, for example. Urban planning, construction and mobility also really need a differentiated approach to policy.

The German foreign ministry has recently taken on responsibility for climate negotiations. Here too we'll have to incorporate a feminist view in climate and biodiversity talks. There's so much expertise there – in research, in movements, in civil society. There are networks. They have to be heard. The point is that feminist perspectives often just stay in their niches. And if our female foreign minister says she wants the foreign office to incorporate feminist guidelines, that means it needs to listen to feminist organisations that work on these international environment issues.

That sounds promising. Thank you for your insights, Barbara. 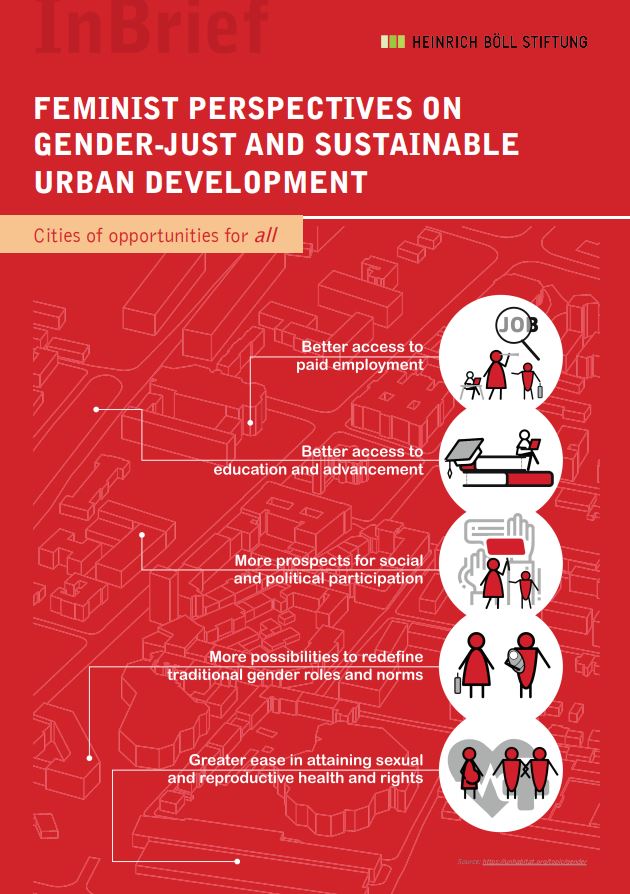 Urbanisation is a defining characteristic of life across the globe in the 21st century. Cities offer many opportunities for different types of people to forge a livelihood and lead a fulfilling social life. The diverse options are taken up in particular by women and people who renounce traditional, binary gender roles and norms and are thus often subject to various kinds of discrimination.

Background
Among those hardest hit by the climate crisis, women have taken some of the leading roles in combatting it. On local levels they are directly addressing the effects of climate change. Here we present some of the core calls for fair and gender-equitable climate financing on a global scale.
By Birte Rodenberg

Analysis
Most regions in the world have been – to some extent – affected by climate change, and Southeast Asian countries are no exception. Within the group of people who are affected,  recognition needs to be accentuated on the disproportionate impact of climate change along gender lines.
By Tri Sulistyo Saputro