Teaser Image Caption
Arriving with a train from Russia in Helsinki

For his documentary a finnish filmmaker followed the coaltravel from Kuzbass to Helsinki. His plan: talking to people in the train about climate change. But they didn't want to talk with him.

We all know that the way we think today will define our tomorrow. But the opposite is also true! The way we picture our future defines what exactly we are doing today.

In 2009 a Finnish filmmaker with the name of an English poet, John Webster, made an ironic documentary film ("Recipes for Disaster") about his experiment of putting all of his family on an oil diet. It was the first film of its kind and was later repeated in front of cameras using different families in different countries. The film was shown across Finland. The poor wife of the exited director almost became a national hero, and the idea to show this film in Moscow actually created the annual Green Documentary Film Festival.

The story of the Finnish family did not end when the final titles of the film were shown. Almost straightaway Webster started to elaborate on ideas for other films – this time without having to use homemade toothpaste and self-produce electricity. Instead of counting the emissions and garbage from an actual family, he moved to the hypothetical future. So he is making his new film for his great great granddaughter.

How do you picture the future? What will the world of your children be like? And your grandchildren’s world? And your great grandchildren’s world? Take the hypothetical growth of all possible data, from world sea levels and its acidification to temperature, pollution, icecap melting, expansion of oil and gas extraction, population growth, number of car produced… if you follow the news, you may not have the most optimistic picture in your head.

At the same time, Webster realizes that we cannot click our fingers and instantly change our industrial and postindustrial world. It will not close plants, make the coal, oil, and gas extraction methods cleaner and less dangerous, and it will not slow urbanization with its cars, TVs, and air conditioners: a pretty sad and unpleasant situation for any responsible and active environmentalist. You know everything, but you can hardly do anything. That is why Webster dedicated his long-term project to his own great great granddaughter.

The idea to film in Russia came from the huge coal "mountain" right in the city center of Helsinki. Despite many great green aspects of its environment, Helsinki, in fact, still heats itself with Kuzbass coal from Russia, and will continue to do until 2050 (by this time the city will have had to completely switch to alternative energy sources). But now coal comes by trains from Russia and lays under the open sky right in the middle of the city for everybody to see. So far nobody has questioned it. Nobody but Webster.

"I want to follow all the coal ‘travel’ from Kuzbass to Helsinki," Webster said, excitedly explaining his complicated plan to me. "We will be filming open mines, talking to miners, to the Novokuznetsk mayor, to blasting bosses… And we will go to Siberia by train! And we will be talking to people in the train about the future for four days!"

I could not help but join in on this plan, even though I started to have questions and doubts almost straightaway as we started to work out issues about our third-class passenger tickets.

"What exactly do you want to ask them about the future?" I demanded.

"You know: What they think about global warming, about climate change. Do they feel the responsibility for future generations? What are they doing to prevent ecological catastrophe?" John replied confidently.

But I then remembered applying to some international eco forum. For one of the questions, I had to describe in detail which environmental problems were affecting my country the most. I was stuck and started to call my friends from WWF and Greenpeace. In the end, I replied: "None."

That is why I could not imagine how we were going to get people to answer questions about global climate change. That is why we chose the long way around and first asked people about their grandparents, about the world they lived in, how they pictured the world in the future and (here we asked the question while trying not to mention the answer) which problems they think our children will have to face.

John fobbed off my skepticism and excitedly loaded almost 100 kilos of equipment onto the "Moscow-Irkutsk" train. Among all the bags was an important one with Finnish vodka and chocolate. In our team we had a famous Finnish photography director, a sound girl with all possible microphones, and a production manager. We were pretty obvious to everyone in this train.

Let us live in peace

Let me say it right now. During this three-week stay in Siberia, John Webster did not hear from one single person any worries about global climate change. "I cannot believe it", John grinned to himself, "I came here to shoot a film about warming and climate change, but no one even says these words out loud!"

That made it incredibly hard to actually talk about the future. People enjoyed remembering their ancestors, but when it came to the next generations, anything more distant than actual children was disappearing in the mysterious mist. I will not even mention now shocking for long-liver Scandinavians total convention of all men a bit over 50 years old that their time is almost over, and there is no need to think about the future now. Michail, who after his retirement started to plant peach trees in his garden, had an unexpected explanation:

"Why do I plant trees? Well, I like them. I have always wanted some peach trees. What? Grandchildren? Nah, why would they need my peach trees? That’s for me."

Without suggesting (ecological) questions, the passengers of our train mainly worried about just one thing in their future: war. They all repeated this line from an old Russian song: "Let us live in peace, send us no war." We can survive anything else. Because anything else is not that terrible. Water and forests? Well, we have a lot of water and a lot of forests! Why should we worry about it? We will always have Taiga, we will always have coal, and water will never end. If air becomes a bit polluted, we will put air purifiers in our flats. And it was incredible to see that behind our optimistic passengers, there were many trains filled to the brim with coal, wood, and oil. Days and nights of trains. I had never noticed how many trains go through Siberia. Soon the Novokuznetsk mayor will tell us that just his region loads around 10,000 carriages a day. A day.

(By the way, the mayor listed for us all the possible advantages and aspects about the great future of the local coal industry. "Can you just imagine it going some other way," John suddenly asked. “Like Finland can soon stop buying coal, maybe some other European countries, too. Demand will disappear…”  The mayor looked in his eyes without changing the expression on his face: “That’s not gonna happen,” he said confidentially. “Nothing will change here for a looong time”).

Near Novokuznets in the small coal town of Osinniki, we spoke to young guys whose parents and grandparents have always worked in the mine, and their children will also work there, as these guys hope. And every time they heard that John felt responsible for the happy life of his great great granddaughter on a clean and beautiful Earth, they would grin and tap John’s shoulder: “Don’t worry, director, it is going to be fine. We’re gonna make it. Don’t take too much upon yourself.”

At any given moment in the environmental movement, you could hear these words: "The critical time is now." That is, right now we have to change the way things are going and decrease the number of substances  we emit into the atmosphere. Right now. Otherwise, it will be too late. Otherwise, the consequences would be unpredictable. Despite climate change never obtaining the "urgent" status from politicians, more and more money is being invested for incredible (by scale and risk) geo-engineering plans, like the plan to create a barrier of artificial clouds between the Earth and the sun. Or even more popular, plans to actually escape plant Earth. But does that not reflect the same panicked mood we have seen from ecologists for years?

The question is: How many people realize not only the fact that we should act right away, but simply recognize what is going on with the land, air, and water around us? What should we think about this Siberian trip and about the people we met? What is it? Ignorance? Optimism? Fatalism? Indifference? And who would ever search for ways if we can see these feelings in "ups" and "downs" of our society?

You can find more articles on the climate summit in Paris in our dossier.

After the failed climate summit in Copenhagen 2009, governments of 196 countries meet again at COP 21 in Paris at the end of November to negotiate a globally binding climate agreement. In this ongoing dossier we pick up these and other aspects and complement them with regional analyses from our international offices. 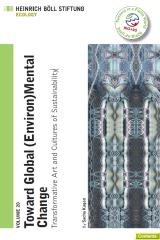 Toward Global (Environ)Mental Change - Transformative Art and Cultures of Sustainability

Publication Series on Ecology 20: The global crisis of unsustainability is not only a crisis of the hardware of civilization, it is also a crisis of the software of minds. Therefore we need a global (environ)mental change, that is a transformation process to affect the many relationships between our minds and their environments.

Conceptual Thoughts on Establishing a Fund for Aesthetics and Sustainability

We live in an era of comprehensive social transition, in an era of the “not anymore and not yet.” This diagnosis of not anymore/not yet is the point of departure for bringing aesthetics into the debate on sustainability. It is based on the claim that artistic strategies are the best approach in radically open contents and for dealing with gaps.