Yes to fracking, no to renewable energies? The need for a forward-looking U.S. energy policy

Teaser Image Caption
"Are we betraying the planet?" Street art in New York

Without active U.S. participation in the global energy transformation, reaching the goals agreed upon in Paris will be almost impossible. If nothing else will convince the majority in the U.S. Congress, then the China factor should.

The fundamental opposition of most Republicans in the U.S. Congress to accepting the reality of climate change is well known – as is the strong influence fossil fuel industries have over the U.S. political process.

What is so peculiar from an international perspective about the current state of play is that the same people who readily dismiss transitioning to renewable energy technologies as a pie-in-the-sky goal celebrate hydraulic fracturing (commonly known as "fracking") so unrelentingly.

Why does that same optimism and determination not extend to the much larger – and ultimately much more profitable (never mind environmentally beneficial) field of green tech?

As things stand, Congress is doing a disservice not just to the American people, but the world at large. The United States has all the elements needed to quickly make major advances in combatting climate change. Its key assets include a vast knowledge economy, extensive corporate and academic research networks, manufacturing potential and an IT industry seriously engaged in becoming CO2 neutral.

For better or for worse, with the climate change deal done late last year in Paris, the United States will play a pivotal role determining the success or failure of the undertaking.

U.S. politicians, notably Republicans, always strive for U.S. leadership. This is such a moment – and one the entire world would readily embrace. Turning the vision of a vibrant green economy into reality would give other nations already going ahead with the green transformation, such as Germany and China, a run for their money.

But even though the post-Paris scenario presents the United States with an historic opportunity to catapult its economy into the solar age and to regain political credit in the developing world at the same time, it may well shrink back from the opportunity to lead.

What is so outlandish about determined, long-term political support for zero-emission buildings, luminous microbulbs, ultra-efficient batteries or technologies for converting wind energy into hydrogen? Just like many of the currently contemplated future technologies in the renewable energy field, fracking was once considered a "freak" technology.

But while Congressional Republicans celebrate the know-how required to inject a cocktail of hundreds of chemicals and water into bedrock to break it and release useable gas and oil, most of them are dead set against government support for non-fossil technologies.

The fracking industry would never have come about without a regular stream of funding by the U.S. government. This is all the more baffling because in some pretty conservative areas such as Texas, there is strong support for renewable energy at the state level.

The initiatives undertaken by U.S. cities and some U.S. states are impressive. But they cannot compensate for the lack of a long-term policy at the federal level. That is why U.S. Congressional support for innovations in the renewable energy sector will be more critical than ever. Without determined long-term support from Congress, no predictable and consistent policy framework can be implemented.

Having ignored the challenges of global warming much too long, time is now extremely limited on all fronts. Without active U.S. participation in the global energy transformation, reaching the goals agreed upon in Paris will be almost impossible.

The global energy revolution is on its way

If nothing else will convince the majority in the U.S. Congress, then the China factor should. Over the last few years, China has become the global champion of renewable energy in terms of manufacturing and application. This despite the fact that many of the advances in clean energy production and storage have come from U.S. research hubs and that some of the most advanced solar companies are based in the United States.

However, unlike the case in China, the focus and support U.S. companies active in these sectors have received at home has neither been systemic nor at a scale necessary to deal with this kind of a groundbreaking industrial transition. In fact, these issues have often become political footballs, with efforts to stall further advances by cutting funding.

No one is more eager to exploit the shortcomings of the U.S. political system and the self-inflicted damage it imposes on U.S. industrial fortunes than the Chinese leadership. After becoming the global factory, China now has the aspiration to become the front-runner on green innovation.

As a matter of fact, in a global context, this ambition is a positive development. China is the most important factor with respect to climate stabilization. The sooner the country decouples economic growth from CO2 emissions, the better.

Costs for wind and solar power are dramatically declining. With or without the U.S., the global energy revolution is on its way. The real question is when the U.S. Congress will wake up to the damaging implications of its narrow-minded approach on renewable energy.

Tackling this challenge is not a question of picking winners and supporting specific technologies. The government needs not choose between competing battery designs or between wind and solar, bio ethanol and wood biomass, geothermal and tidal.

Rather, public funds should be made available to all qualified projects in line with a set of sustainability indicators and showing potential on achieving the goal of generating and storing carbon-free power. No less important is a coherent federal policy of setting efficiency standards and emission limits for power plants, vehicles, electronic devices and buildings. Finally, smart regulation will help boost green markets.

What the Paris Agreement means for Climate Policy in the US

In his support of, in and for Paris, President Obama has emerged as the first real “Climate President” of the United States. Nevertheless, whether or not his country and predecessor will remain faithful to this legacy remains uncertain.
By Rebecca Bertram 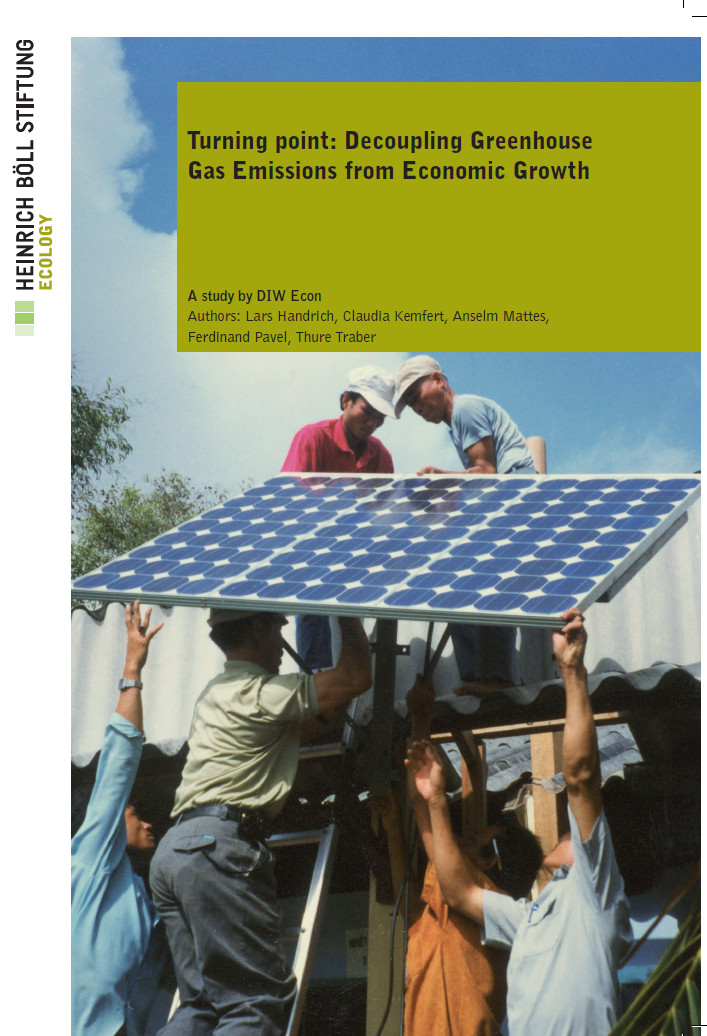 The transformation of economic growth towards a lower dependency on fossil fuels and related greenhouse gas (GHG) emissions is essential for the feasibility of a successful global climate strategy. A study by DIW Econ.

COP 21 and the Paris Agreement: A Force Awakened

Globally, political leaders are lauding the acceptance of the global and legally binding Paris Agreement on Climate Change at COP21 as a historical moment. It achieves a goal long believed unattainable. However, judged against the enormity of the challenge and the needs and pressure from people on the ground demanding a global deal anchored in climate justice, the Paris Agreement can only be called a disappointment.
By Lili Fuhr, Liane Schalatek, Maureen Santos, Hans Verolme, Dr. Radostina Primova and Damjan Bogunovic