Time for a Plan B in European Refugee Crisis

The number of refugees fled to Europe in 2015 revealed the EU's deficient common asylum policy, which disproportionately affected the southern member states. To overcome the EU crisis, there is more needed than an EU-Turkey deal.

Over the course of 2015, an estimated 1.5 million people – the bulk of them refugees from Syria – made their way from Greece to Western Europe via the Balkan route. The shift to this previously marginal route for irregular entry of refugees and migrants into the EU led to the collapse of the EU’s external border in the Aegean and turned the long-standing problem of the EU’s deficient common asylum policy, which disproportionately affected the southern member states, into a full-fledged crisis.

This crisis was of the EU’s own making and could have been avoided with sufficient political will. If the international community had fully funded UNHCR’s Syria refugee response plan rather than providing just 35 per cent of the requested budget in 2015, and if a few EU member states had been willing to resettle 2-300,000 Syrians from Turkey, Lebanon, and Jordan, the EU most probably would not have seen more asylum-seekers in 2015 than in previous years.

Instead, the Union’s Dublin system broke down. Following the reinstatement of internal borders in half a dozen member states, so did Schengen, amplified by additional ingredients: the weakness of Greece’s public administration; the fragility of asylum systems, administrative capacities, and democratic policing in the Western Balkans; and the authoritarian transformation of Hungary’s political system.

The coalition of the willing

As late as early autumn 2015, the refugee crisis was still fully manageable. The EU’s immediate response followed the playbook used in various crises from the eurozone crisis onwards – a combination of reactive German leadership supported by a coalition of willing member states. On September 4, Chancellor Merkel, supported by her Austrian counterpart Werner Faymann, arranged with Prime Minister Viktor Orbán for the transit of refugees and migrants from Hungary with the aim to avert an escalation of the situation in that country. Merkel assembled a coalition of willing states that accepted to receive the bulk of refugees and migrants and worked with the countries on the Balkan route to avoid regional tensions over the wave and to achieve an initial smooth transit free of major human rights violations.

However, unlike in previous crises, Merkel’s attempt to shift from crisis management to a joint European policy failed. Merkel and the EU got stuck when a relocation scheme for 160,000 refugees and migrants, approved later in September by a weighted majority of member states, provoked dissent from Robert Fico, Slovakia’s prime minister. Fico’s announcement (supported by other Central European countries) that Slovakia would not implement the scheme marked a turning point: with it, the EU in effect ceased to function as a rules-based entity in the field of refugee and asylum policy.

A rise in subsequent unilateral measures by member states led to the gradual erosion and ultimate collapse of the coalition of the willing, with France, Sweden, and Austria defecting from it and abandoning their liberal asylum policies. Yet giving in to populist pressure still proved unsuccessful in mobilizing support from electorates: even in Slovakia, Fico’s party subsequently saw substantial losses to right-wing forces from which it had taken its anti-migration rhetoric. At the same time, Merkel also came under domestic pressure for her liberal approach.

In the absence of joint EU action, the receiving countries instead turned their attention to ways to reduce the flow of refugees and migrants through the Balkan route, even if that meant that the countries along the route would have to breaching domestic and international legal obligations. The countries on the Balkan route were now being held hostage by individual EU member states, first and foremost Austria. Vienna’s policy led in time to the complete closure of the route.

Unresolved internal problems led to an existential crisis for the EU

The failure of the EU’s established crisis management revealed the core problem behind the refugee crisis: the EUs own unresolved internal problems which turned a manageable migration emergency into an existential issue for the EU. Merkel’s policy style – managerial, and averse to risks, broad strategies, and vision – had seen the EU through a decade of crises, but at the same time camouflaged the core of the Union’s weakness: the reluctance to address its structural challenges. In the end, this failure contributed to the erosion of internal legitimacy and joint action which greatly contributed to the UK’s sleepwalking out of the EU.

In this change-averse environment, Merkel’s only remaining option was the desperate outsourcing of the EU’s refugee management to Turkey, sealed by the March 17 EU-Turkey refugee deal. There is both an irony and a political logic in the fact that the deal, which tied the refugee issue to the reanimation of Turkey’s EU accession and visa liberalization process, was a product of the policy of two member states – Germany and Austria – that for years had blocked Turkey’s EU bid.

The deal stopped the flow of refugees and migrants across the Aegean Sea practically overnight. But in the medium and long term, it will inflict more collateral damage than it delivers in short-term benefits. First, by declaring Turkey a safe country for asylum-seekers – a legal sleight-of-hand to enable the return of those arriving on the Greek islands to Turkey – the EU has damaged its internal legitimacy as a Union based on liberal democratic values and rules, and endangered the internal enforcement of decisions and rules in all policy areas.

Second, by offering Ankara progress on EU accession without internal agreement on Turkey’s eventual membership, the EU severely diminishes the transformative power of its enlargement policy and undermines pro-European, pro-reform Turks. Third, by outsourcing the management of the European refugee crisis to an increasingly authoritarian regime in Ankara while continuing to avoid addressing its own structural problems, the EU has made itself dependent on Turkey. This bodes ill for the EU’s ability to deal with future crises.

High time for a plan B

The coup attempt in Turkey of July 15 and resulting political tensions between Ankara and Brussels have not substantially affected the refugee deal. But the Turkish government’s threat to re-open the gates to Europe and the hypocritical demands from within the EU to freeze Turkey’s EU accession process have highlighted some of its core deficiencies.

In order to prevent long-term damage to the EU and mitigate the risk of a purely reactive response should the deal collapse, it is high time for the EU to develop a more sustainable Plan B for handling the refugee crisis, and to address the core structural problems which openly lurk behind it.

The refugee crisis is a serious challenge for the EU that has no quick fixes and comes with burdens and costs, along with benefits; but it need not pose an existential threat to the EU or its member states. It is manageable if managed jointly. The EU’s core crisis, by contrast, is far more profound and indeed existential, and it must be addressed quickly – even more so after the UK’s June 23 Brexit vote.

I. Addressing the EU’s internal crisis
Merkel and other EU leaders must take the Brexit vote as a wake-up call and initiate an urgent debate about a reform of the EU. This debate must take place both among member states’ governments and as a broad, participatory public discussion, reaffirming the Union as a community of states based on common liberal-democratic values and building a civic constituency for such a reinvigorated EU. One option might be a new attempt to draft an EU constitution.

II. Towards a sustainable refugee crisis policy
In parallel, the EU, its institutions, and the member states that are committed to a values-based European asylum policy must work towards a change of the current asylum and migration policy. As a first step, the EU must adopt a sustainable approach to the immediate refugee crisis that is firmly rooted in legal obligations and based on joint action and responsibility.

The EU should cancel the EU-Turkey agreement of March 18 and instead offer Ankara a new deal that rewards Turkey for cooperation in curbing irregular border-crossing into Greece with genuine burden-sharing, while decoupling EU accession and visa liberalization from the migration issue. The main ingredients of such a new agreement should be:

Other supportive measures
Several other measures not linked to Turkey should be undertaken by the EU and its member states:

III. Towards a genuine common European asylum and migration policy
Once the current refugee crisis has been brought under sustainable control, Germany, other leading member states, and the EU institutions must push for a thorough reform of the Common European Asylum System and the wider EU asylum and migration policy. A reformed policy must be based on four core principles:

a. enable war refugees, who so wish, to stay as close to their home countries as possible;

b. among refugees and migrants who reach the EU, separate out the war refugees – who are entitled to temporary protection for as long as conditions are not met for them to return to their countries of origin – from asylum-seekers entitled to permanent asylum (due to prosecution based on ethnicity, gender, sexual orientation, political conviction, etc.);

c. create disincentives for migrants who enter the EU for economic reasons and are not entitled to international protection to claim asylum;

A reformed EU asylum and migration policy should focus on the following elements:

This text is part of a DPC Policy Paper by Bodo Weber and was first published in September 15th on the Democratization Policy Council's website. This report was made possible with support from the Heinrich Böll Foundation in Serbia. The opinions and views of the author do not necessarily state or reflect those of the Foundation. 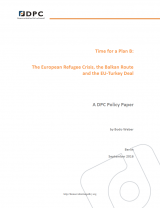 Time for a Plan B – The European Refugee Crisis, the Balkan Route and the EU-Turkey Deal

This DPC paper by Bodo Weber critically deals with the policy European States pursued around the 'refugee crisis'. Furthermore, it gives recommendations for political institutions how to deal with the current situation and how to overcome the crisis of the EU.

The current ‘refugee crisis’ represents a political crisis for Europe as lack of coordinated action. Our dossier is an attempt to see how national differences present themselves and what common ground might still be achievable for a common European policy.

Many experts are in agreement that the causes and long-term implications of the refugee issue can hardly be resolved at national level. Whether Brussels can play a more prominent role was the subject of debate at the annual European Conference held by the Heinrich Böll Stiftung in Berlin on 26 May 2016.
By Torsten Arndt

The EU needs a proper strategy that allows migrants a legal form of access. The current situation of the camps in and around the EU is unacceptable. The issue of clarifying immigration regulations for the EU must not be put off any longer.
By Rebecca Harms