State capture by well-connected politicians and their recklessly proceeding patronage networks has been far reaching in the Balkans. How could citizens deal with very diffuse networks, if there are no intact correctives, no free, no independent justice?

The attackers came in flocks, they stormed, some of them masked, the session hall of the Parliament in Skopje. They staged their attack in the manner of hooligans, one parliament member was pulled by her hair and hurled like a human catapult. The thug squads chose their victims cautiously: social democrats and members of the Albanian minority group. After the act of violence, Zoran Zaev, former leader of the opposition, now Prime Minister, was bleeding from his head, the Albanian MP Talat Xhaferi, who had been elected Speaker of the Parliament, was dragged like an animal through the building and severely injured. His health was a matter of serious concern for days.

A few days after the attack, footage circulating online verified that the attackers had been let into Parliament by members of the VMRO-DPMNE party, the party that has been in power for years: phone calls had been made and, shortly after, someone removed the safety bar and opened the door of the building – thereby opening the way for the most brutal attack on state institutions in the region in years.

This approach was only the latest proof that the party of long-serving former Prime Minister Nikola Gruevski, along with his supporters, had made it a principle to put themselves above the state. L´état – c'est nous!

When, like after the parliamentary elections in December 2016, there is the prospect of loss of power through democratic means, this power is defended – by all available means. The ruling clique surrounding Gruevski previously declared the state to be private property, seized its institutions and degraded them to compliant instruments. The countless abuses of power and office have been documented very well through numerous recorded telephone calls, revealing the criminal workings to the public in 2015.

A sort of neo-feudalism has developed, in which citizens do not count

State capture by well-connected politicians and their wide-ranging supporter networks has been far reaching in other Balkan states as well: In Bosnia and Herzegovina, the three nationalistic parties are dividing the country painstakingly into three influence zones. The resources, state-owned enterprises, energy providers, banks. And, not least: the education system. Everything is appropriated and politicised along ethnic-nationalistic dividing lines. There is almost no practical politics, the concern for the public interest is almost inexistent. Instead, party leaders claim for themselves and their entourage increasingly large pieces of the cake.

While 50 percent of the population remain unemployed, the infrastructure has not been upgraded since the 1970s, 22 years since the war ended there are still no state-level ministries of education, cultural affairs and agriculture (in a country with up to 60 percent rural areas), and the health care system vegetates at the level of developing countries, Bosnia´s elites have been enriching themselves for years through their unrestricted access to resources.

The administrative apparatus thereby functions, like everywhere in the region, as the toolkit for the meticulous consolidation of power: The one allocating jobs in a country where there is normally no work available, creates an army of subordinate supporters, who all profit from the system of party patronage. In this way, a sort of neo-feudalism has developed, in which citizens do not count, only the will of the big clans, which got rich already during the Balkan wars through smuggling and para-state activities.

In Serbia, the ruling SPP under Aleksandar Vucic created a powerful system that absorbed state institutions and state-owned enterprises. In this universe there is no space for those who are not loyal to the party. Opposition and civilian actors are, in spite of all the pro-European lip service, rigorously combated, criminalised, and, not least, threatened.

In Albania, the justice system serves as a flourishing source of income for judges and public prosecutors and as a devoted power consolidation instrument for politics – so far, all major cases against high-ranking politicians have been either obstructed or brought to a standstill by judicial representatives. The judicial system does not function as an autonomous element of the state system, but as a friendly accomplice of corrupt and criminal civil servants.

Their claim to power is radical, their approach repressive and even authoritarian

The conditions in the Balkans prove clearly that the local political caste does not have anything in common with politics in the traditional sense: It is not concerned with solving social, economic or ecological issues, or with increasing general prosperity – the guiding principles of good governance have hardly been implemented. In point of fact, the concern is with using state resources in an unhindered manner and with protecting these all so beneficial doorways for friends and family members.

In such oppressive power structures there is barely space for those defining themselves through performance or creativity. Thus, it is precisely this endemic party patronage, the distribution of posts based on connections, that is driving hundreds of thousands of well educated and trained people out of those countries: A mass exodus is already blazing its trail towards Western Europe, where, in the best case, what counts is the individual work performance, the know-how, and to a lesser extent belonging to a certain group or party.

Despite all differences of the political framework, the political actors of the region do have one thing in common: Their claim to power is radical, their approach repressive and even authoritarian. Reforms are blocked extensively, critics declared enemies of the state, civilian actors, artists and journalists denounced and marginalised. The highest goal is to cement the illiberal conditions. Because the political actors know one thing: The more democratic reforms take effect, the more the state, especially the judicial system, moves towards functionality, the more dangerous this becomes for one's power base, the bigger the possibility becomes that one's actions are prosecuted – like in the case of former Croatian Prime Minister Ivo Sanader, who was sentenced to a long prison sentence because of corruption.

Against this backdrop, the utterance of political or diplomatic representatives from Berlin to Brussels, which has been repeated time and again, according to which the political elites in the Balkans must have “an interest in a fast EU integration,“ seems oddly far from reality. Why should groups, who have fluid connections to informal and criminal networks, who define themselves solely based on power, whose resonating environment is the clan or the party, who have created a land of milk and honey for themselves at the expense of the general public, have an interest in democratisation processes, which would restrict precisely this power of the unhindered exploitation of the state system?

In order to secure their influence, the elites have been making use of old recipes: Nationalistic narratives are disseminated, friend-and-foe schemata fuelled purposefully, in order to divert from one´s failure on the one side (all the countries are still facing high unemployment rates and sweeping poverty), and on the other, in order to goad voters and rally them behind themselves. Who, like in Macedonia's case, are warning the VMRO-DPMNE of enemies of the „Macedonian cause“, who, like in Bosnia, are perpetuating the victim myth and blaming other ethnic groups for their misfortune, who are making calculated use of the divide et impera principle: Thus, a perpetual system of fear is kept alive. This approach is still successful and repeatedly secures the dominant parties victory, not least because the media landscape is also dysfunctional and seized by parties and politics, and an objective, balanced media coverage of the true issues in the country is truly rare.

The restrained approach of the EU has failed

The international community, especially the EU and its member states, seems clumsy and even over-burdened in light of the recklessly proceeding patronage networks in the Balkans: The approach of local ownership which has been propagated for a long while is dangerously ignoring the real balance of power in those countries.

How could citizens deal with very diffuse networks, if there are no functioning correctives, no free, no independent justice? Or, to put it another way: Who has the power to confront them in a system, in which the last corner of society is permeated with the influence of parties and clients, where even the simplest posts like kindergarten director are allocated by the dominant power apparatus, the political parties and their leaders?

The restrained approach of the EU has mainly effectuated one thing in the last few years: That the reform-resistant elites were able to further widen their sphere of influence. Furthermore, laboriously achieved reform successes were made void. Thereby, in the past few years the region underwent a dangerous process of backsliding and a repeated radicalisation.

While the EU has been dealing with internal problems, these political actors, who for good publicity like to praise themselves in discussions as reformers, have been accepted as equals for a long time. These hijackers of state systems have used this to benefit themselves, and, instead of implementing reforms, have strengthened anti-liberal and authoritarian tendencies.

Not seldom have the members of the international community believed this misconception that this superficial stability, the created “stabilocracies“ – as a counter-model to true democratisation – could be a recipe for success for the sustainable establishment of peace in the region.

Quite the contrary has been the case: The non-functioning state systems, the judicial systems barely deserving of the name, created new space for actors like Turkey, Saudi-Arabia, Russia and others, going after their geo-strategic goals in the region, which are undoubtedly diametrically opposed to the tenets of the European Union.

What is lacking is non-negotiable conditionality when demanding and securing the necessary reforms (especially in the area of the rule of law and anti-corruption measures) on the one hand, while, on the other, there has to be uncompromising support for, and revaluation of precisely those agents of change who are truly interested in democratisation: Those civil society actors who have been largely neglected by international actors and left alone in the battle against the corrupt networks.

The Heinrich Böll Foundation, which supports democratisation processes in over 60 countries worldwide, is convinced that a democratic renewal in the Balkans can only be achieved by a strong civil society. So far, a strategic partnership with civil society actors is lacking. Should they be ignored in the future as well, and be left alone in their struggle with the elites, even the last brave ones will leave the region discouraged, in order to offer their expertise in some other place. Then, the reform-resistant power structures would gain even more space to hamper any further progress.

This article was published first in "Perspectives Southeastern Europe #3: Captured states in the Balkans". 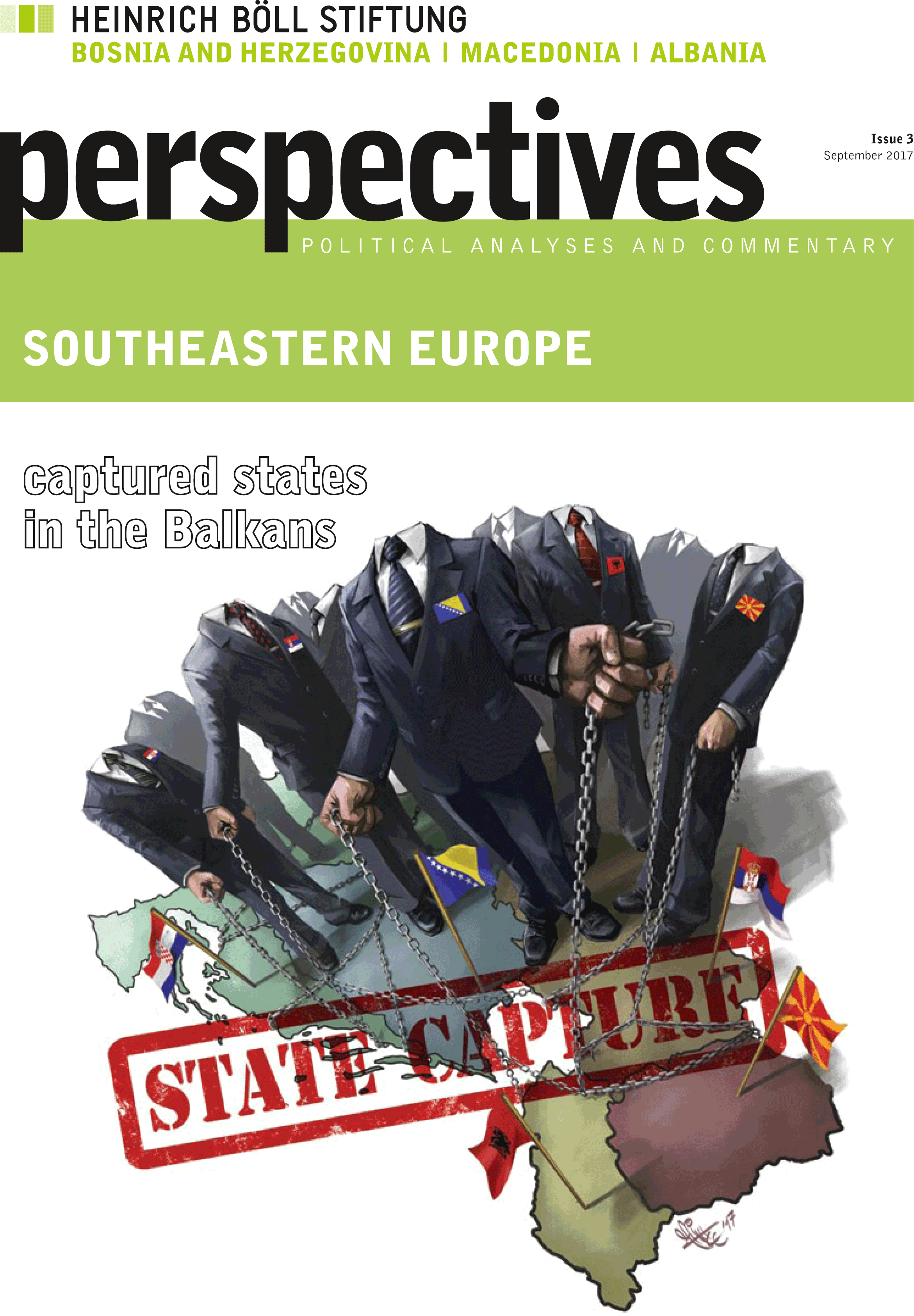 The international community, especially the EU and its member states, seems clumsy and even over-burdened in light of the recklessly proceeding patronage networks in the Balkans: The approach of local ownership which has been propagated for a long while is dangerously ignoring the real balance of power in those countries. How could citizens deal with very diffuse networks, if there are no intact correctives, no free, no independent justice? 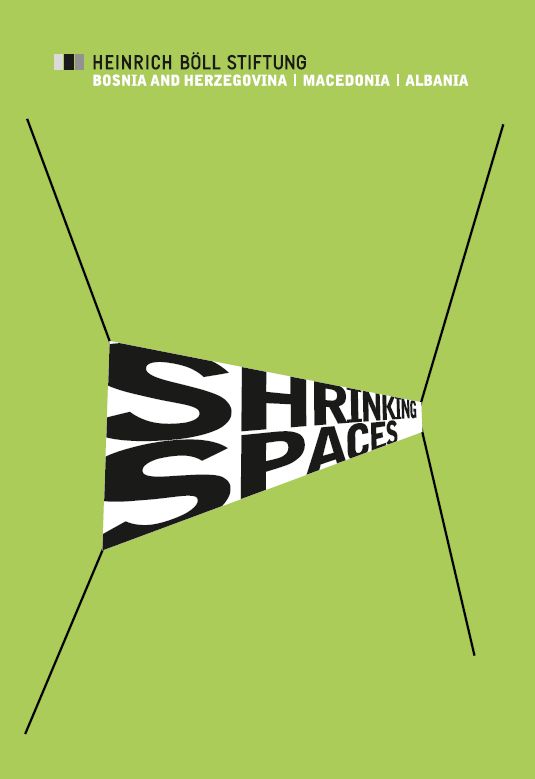 Shrinking spaces in the Western Balkans

Without civic engagement and participation, democratization cannot succeed. This publication sheds light on the complex mechanisms of shrinking spaces in the Western Balkans, provides analyses, and develops adequate countermeasures.

The hostile environment created by the government makes the work of civil society actors practically impossible. To be a human rights activist in Macedonia is to be a person that is constantly threatened, attacked, and demonized.
By Xhabir Deralla