What to expect from carbon pricing – and what not

European emissions trading has been in place since 2005. This system is used to put a price on greenhouse gas emissions from certain industrial and power generation plants. In addition, emissions trading at the national level has been introduced as of January 1, 2021. National emissions trading applies to emissions generated by transportation and heating. This carbon surcharge on vehicle and heating fuels is the centerpiece of the German government’s climate protection package from autumn 2019. With this legislation, the German government aims to reduce greenhouse gas emissions by 55 percent by 2030 (compared with 1990 levels). It is also intended to ensure that Germany plays its part in achieving the Paris climate protection targets. Even on paper, the climate protection package falls far short of that objective: Meeting the Paris targets would mean reducing CO2 emissions by between 65 and 85 percent by 2030.

The price on carbon sends a signal for climate protection

In principle, putting a price on CO2 emissions is necessary for climate protection, and applying the polluter-pays principle is an important step toward climate justice. As long as follow-up costs are not taken into account, climate protection will not have sufficient weight in investment decisions. To put it another way: Companies and households will not reduce CO2 emissions until they have a sufficiently high price – i.e. until emitting CO2 is more expensive than mitigating such emissions. This steering effect of the price is one of the fundamentals of carbon pricing models. The effectiveness, i.e. the emission reduction potential of carbon pricing, results on the one hand from the steering effect of the prices (incentive side) and on the other from what is done with the proceeds (redistribution side).

Depending on the price level, the emission reductions from a targeted transition to renewable energy and from financing climate protection (redistribution side) could even be greater than the steering effect from prices (incentive side). The carbon surcharge for heating and fuel, which has been in effect in Germany since January, is currently very low at 25 euros per ton, whereas the actual damage costs are estimated at around 195 euros. Even if the carbon price in Germany continues to rise, the steering effect will remain low (German Federal Environment Agency 2020). In this respect, national emissions trading can be characterized more as an instrument for raising funds. The price would have to be sufficiently high for it to have a stronger effect on the incentive side as well, but this is not yet the case either in European emissions trading or in Germany’s national carbon price.

Distribution effects must be compensated

Carbon pricing always entails distribution effects that must be partially offset. Private households and companies are affected to different degrees by carbon pricing: for private households, depending on income; for companies, depending on industry and energy intensity. How quickly can consumers respond to and avoid higher carbon costs? Who will be compensated for the increase in heating costs, by how much and under what conditions? How will redistribution be organized? To what extent will companies considering relocating their value creation abroad because of rising domestic energy and fuel prices receive support? What are the criteria for funding? There are many ways to compensate for economic hardships caused by distribution effects. In terms of socio-ecological modernization, it is important that low-income households receive compensation.

Carbon pricing alone is not enough

A carbon price is not a panacea for the socio-ecological modernization of the economy and society. A broad range of instruments is needed. In the heating and transportation sectors in particular, targeted promotion of climate protection technologies such as low-emission heating systems and regulatory legislation such as fleet limits are key levers for reducing emissions. The carbon price is an important component in the toolkit that can generate the necessary financial resources. Under current conditions, many climate protection investments only pay off at high, triple-digit carbon prices. As a result, the carbon price has only a limited effect on the development of new technologies and innovations that are urgently needed. In other cases, some measures are already paying off today. But there are other obstacles, such as the lack of an adequate infrastructure for electric vehicles. 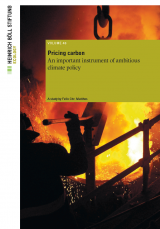 Both in Germany and internationally, the debate on the pricing of greenhouse gas emissions is experiencing a renaissance. However, an enlightened and realistic discussion of ways and means is needed so that CO2 pricing instruments can play a stronger role in climate policy. In this study, climate and energy expert Felix Chr. Matthes of the Öko-Institut examines the relevant elements of a CO2 pricing strategy. He gives an overview of design criteria and mechanisms of action.

We presented the design and impact mechanisms of various carbon pricing models in a three-part basic course on carbon pricing in mid-January 2021. The recording (in German) can be found on YouTube, while the slides are available here. A systematic consideration of the relevant elements of a carbon pricing strategy can also be found in this study (in German) and here in English.

The author would like to thank Swantje Fiedler (FOES) and Maita Schade (Agora Verkehrswende) for their assessments and feedback. The author is responsible for the content of this article.

Travelling exhibition
The exhibition "Climate Killer Cement", designed by Save Kendeng and Watch Indonesia and produced with the support of the Heinrich Böll Foundation, highlights on the one hand the impact of cement production and construction megaprojects on ecosystems and indigenous communities, but also aims to show positive local alternatives.

Atlas
People who combine different means of transportation in everyday life can organize their mobility with great efficiency. Ideally, all the building blocks of such a “multimodality” fit together.
By Philipp Kosok

Interview
Iryna Holovko, board member of the Center for Environmental Initiatives “Ecoaction”, talks with Robert Sperfeld about the issue of climate protection within Ukrainian society.
By Robert Sperfeld