For a good life for all, for one Earth for all

International trade rules – be they those of the World Trade Organization (WTO) or bilateral agreements – favor exploitative relationships. And the latest IPCC report warns that many of these trade and investment agreements severely limit the political scope for climate and environmental protection. The EU, with its attractive single market, has a great deal of power and influence here. We must take advantage of both now. 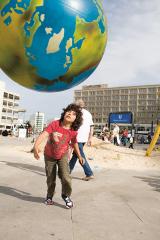 Clothing, food, electronics and other everyday products are produced in global value chains and traded internationally. Working conditions in many factories – especially those in the global South – are often poor, wages are low, and the negative consequences for the climate and environment are high. All of this is no secret. But things can – and must – change. These exploitative conditions are not a natural law of globalization, but are favored by international trade rules – whether through the World Trade Organization (WTO) or bilateral agreements. Even the latest IPCC report warns that many of these trade and investment agreements severely limit the political scope for climate and environmental protection.

A glaring example of this is the little-known Energy Charter Treaty (ECT), which came into force in 1998 and protects investments in the energy sector. The far-reaching legal rights granted to investors allow them to claim billions of euros in damages in private arbitration tribunals if they see their investments at risk – for example due to the phase-out of coal or nuclear power. This stands in blatant contradiction to the Paris climate agreement as well as to the goals of the EU Green Deal. I am therefore fighting in the European Parliament for an exit from the ECT and a restriction of dangerous investor-state lawsuits, a Green initiative that was also laid down in the German government coalition agreement.

With numerous trade agreements, there is scope to initiate renegotiations. Twice already, the European Parliament has called for exactly this with regard to the EU-Mercosur agreement. This agreement between the EU and the Mercosur countries Argentina, Brazil, Paraguay and Uruguay shows how much current trade policy is at the expense of the climate. Removing tariffs on agricultural exports like meat and soy will give insatiable agribusiness a boost while driving the destruction of rainforests. Under the presidency of Jair Bolsonaro, deforestation of the Amazon has increased again, with more than 13,000 square kilometers cleared between August 2020 and July 2021 alone. The Amazon is not a resource that we can exploit without consequences, but the dying lungs of our planet. The European Commission is not taking this seriously, in that it negotiated the agreement without completing an assessment of its possible consequences and did not establish any binding, sanctionable sustainability standards.

We need both: Before negotiating an agreement, we must analyze its social, human rights and environmental consequences and finally take the findings of this so-called impact assessment seriously. The chapters on trade and sustainable development (TSD) in the agreements must at last be designed in such a way that a failure to comply with the standards and legal norms laid down in them has actual consequences. As the Greens/EFA in the European Parliament, we are pushing for the European Commission to finally come up with a strong reform proposal. But a revision of the TSD sections will not be enough. We must ensure that the EU's trade strategy and future agreements (for example with Chile, New Zealand, Australia, India and the ASEAN countries) align with the Paris climate agreement and the United Nations' Sustainable Development Goals – and thanks to the Greens, this is exactly what the German government coalition agreement states.

Smart incentive mechanisms for ecological goods and services as well as fair competitive conditions in line with an environmentally friendly subsidy policy must become the EU's trade policy cornerstones. A study by the Greens/EFA in the European Parliament outlined the possibilities for ambitious EU trade policy using the example of the agreement with New Zealand. They include a joint commitment to phasing out fossil fuel subsidies domestically and internationally, as well as curtailing other environmentally harmful, production-related subsidies. At the same time, the parties can support each other in ensuring the transition to low-emission, renewable and socially responsible agricultural systems and sustainable fisheries – and work together to develop internationally recognized performance standards, certification processes and labels to support sustainable trade.

More responsibility in the supply chains

In addition, the EU can introduce unilateral instruments to promote sustainable business and trade. Two of these instruments are currently in the legislative process: The European Commission has presented draft legislation for supply chain responsibility in general and specifically for deforestation-free supply chains. We are now working in the European Parliament to improve those drafts. The Commission's proposal for a new regulation on deforestation-free supply chains focuses on imports of beef, coffee, cocoa, palm oil, soy, timber and their derivatives. Importers and traders of these goods must ensure that their production has not contributed to deforestation or forest degradation.

Products that can be linked to deforestation will no longer be allowed on the EU internal market, even if deforestation is considered legal in the third country in question. This is a turning point – and a huge success by the Greens and civil society, with whom we have been pushing together for years. And we must continue to do so – contrary to the demands of the European Parliament, the proposal does not cover rubber or corn. In addition, it is limited to forests and does not extend to other ecosystems such as wetlands and savannas. It also does not provide for specific due diligence to respect the rights of indigenous communities, who are often particularly hard-hit by deforestation and land conflicts. We will fight for these and other improvements in parliament.

This also applies to EU supply chain legislation: In February 2022, the European Commission finally presented its draft. It calls for companies to be required to conduct human rights and environmental due diligence on their operations, subsidiaries and value chains. In some aspects, the law even goes further than the German Supply Chain Act: for example, the EU proposal takes not just the first supplier but the entire value chain into account, and covers environmental impacts more comprehensively.

However, the European Commission's proposal also has significant weaknesses: Small and medium-sized enterprises have so far been fully exempt, even if they operate in high-risk sectors, and limiting due diligence to "established business relationships" can leave significant loopholes. Despite all this, the proposal is a step in the right direction – and we will make it even better! But the work on fair value chains goes beyond that: Following our campaign in the European Parliament, the European Commission is now working on a new legislative proposal that would ban the import of products that were manufactured using forced labor.

One thing is clear: With its attractive single market, the EU has a great deal of power and influence potential, and we need to take advantage of both. The EU will only live up to its responsibility for human and labor rights, and for climate and environmental protection if it presents an ambitious supply chain law and a law for deforestation-free supply chains. But this is only the beginning. Trade and investment policies must contribute to achieving these goals and respecting these standards and therefore must align with them. After all, trade agreements are the constitution of the global economy. To rewrite its rules, we need to create a new generation of agreements: for a good life for all, for one Earth for all.

Anna Cavazzini has been sitting in the European Parliament for Alliance 90/The Greens since 2019 and fights for a sustainable EU internal market and fair globalisation. She has been Chair of the Internal Market and Consumer Protection Committee since November 2020.