Impact of the COVID-19 pandemic on rule of law in Central Europe: Turning Crisis into opportunity?

Background
The ongoing pandemic of COVID-19 disease has brought about an extraordinary situation. Although the past decades have brought numerous challenges like terrorism or the climate change, the global spread of a disease for which there is neither a cure nor vaccination available is something that political leaders have no experience in tackling.
By Pavlína Janebová

The Nightmare of the Czech Presidential Elections

Commentary
Thirty years after the Velvet Revolution, the atmosphere in Czech society is poisonous. Many who followed the course of the Czech presidential elections during the past few weeks in detail must feel they are trapped in a nightmare.
By Eva van de Rakt

After the elections in the Czech Republic: The end of liberal democracy in Central Europe?

The Czech election results are a source of considerable concern. Nevertheless, it is worth taking a differentiated look at them and not panicking about warnings that all of Central Europe is bidding farewell to the principles of liberal democracy.
By Eva van de Rakt

Orbán tries to destroy Germany’s positive image in Central Eastern Europe, depicting Germany as the capital of the decadent, liberal, pro-immigration EU that is doomed to fail. Tolerating such a behaviour would be a huge long-term strategic mistake for Germany.
By Edit Zgut, Bulcsú Hunyadi and Péter Krekó 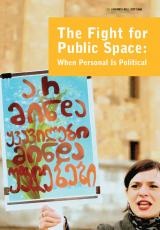 The Fight for the Public Space: When Personal is Political

Public space is not gender neutral. This publication brings together articles written on the basis of materials from the 5th International Gender Workshop in Tbilisi in March 2016. It shows that the history of feminism is a history not only of fighting, but also one of winning.

Could British referendum strengthen pro-EU voices in the Czech Republic?

The government accepted the result with disappointment, while many in opposition saw it as an inspiration. Yet the post-Brexit debate might just as well be an opportunity to anchor the Czech Republic more deeply in the European Union.
By Lucia Najšlová

Refugees in the Czech Republic? Not a trace – but still a problem

Czech society is polarised by attitudes to refugees. This is absurd given that fact that only 1,156 have applied for asylum in a country of ten million people. Xenophobia and hysteria drive the debate.
By Adéla Jurečková

After the EU Summit: Between Appeasement and Campaign Rhetoric

It remains to be seen whether the majority decision on the redistribution of 120,000 refugees was a clever move. In Central Eastern Europe, the voices against the “dictate of the majority” cannot be ignored.
By Eva van de Rakt

A special EU summit of heads of state and government will take place on 23 September. After years of neglect, however, a solidary EU refugee policy cannot be elaborated in summary proceedings and under pressure. A commentary by Eva van de Rakt.
By Eva van de Rakt

The Refugee Policy of the Visegrád Countries: “No one invited you.”

After images of Budapest’s Keleti train station illustrating the need for a fast EU assistance programme for refugees: the governments of Hungary, Poland, the Czech Republic and Slovakia reaffirmed their vehement “no” to refugee quotas.
By Silja Schultheis