Marissa Conway reflects on the announcement of Boris Johnson as the UK’s new Prime Minister and how this change in leadership is unlikely to mitigate the threat Brexit presents to human rights and feminist policies.

On 23 June 2016, the UK voted to exit the European Union (EU). It has since sparked a long and grueling political process fraught with uncertainty, instability, and questions about what the future will hold. But what is certain, as demonstrated by the process of Brexit and the political minds engineering it, is that Brexit is patriarchal and a threat to human rights. Turning a feminist lens onto Brexit, then, reveals a host of concerning power struggles running throughout the process and wider British politics. From racist and Islamophobic narratives underpinning the Vote Leave campaign, to the idealisation of Britain the Empire, to the “glass cliff”, make no mistake: Brexit is a feminist issue.

To understand the patriarchal nature of Brexit, we must first go back to the beginnings of the Vote Leave campaign. Three key themes of racism, islamophobia, and nationalism largely paved the foundation for how Vote Leave crafted its narratives and has since left the country reeling from a rise in targeted hate crime. Much of this particular framing revolved around the idea that the UK - more specifically, white, elite people in the UK - must maintain control of the UK’s budget, authority over its borders, and ultimately, power in the global hierarchy.

This fear of losing power was stoked through targeted ad campaigns. For example, a frequent talking point often touched upon by Michael Gove and Boris Johnson was Turkey’s “impending” membership in the EU. The consequence of such an action, as insinuated by them and many others, was that with EU open borders the mass migration of Muslims into the UK was now becoming “reality”. One billion “micro-targeted” Facebook ads were then launched as 23 June 2016 came closer. According to the Guardian:

Less racist voters got pictures of Boris Johnson (“I’m pro-immigration, but above all I’m pro-controlled immigration”), while the “3 million” got ads shouting “5.23 MILLION MORE IMMIGRANTS ARE MOVING TO THE UK! GOOD NEWS???” and when they clicked “No” were bombarded with scores of variations on the theme.

Some of the racist, Islamophobic, and nationalist rhetoric was not so subtle. Nigel Farage infamously painted causal links between an increase in immigration and an increase in sexual assault. In June 2016, he noted “there are some very big cultural issues” and when asked if the sexual assault reported in Cologne on New Year’s Eve in 2014 was possible in the UK, he responded: “It depends if they get EU passports. It depends if we vote for Brexit or not. It is an issue.” This style of fear-mongering legitimises the usage of racism as a “valuable” political argument. Perpetuating the idea that similar mob-style assaults on British women are inextricably linked to an influx in male migrants of colour likewise plays into a the myth of the “black rapist”, often weaponised by white people in a Southern US context to uphold a hierarchy rooted in white supremacy. Farage frames his concerns as an issue of women’s health and safety, but the underlying desire is to preserve “White hegemonic patriarchal power” so that the autonomy of men of colour, specifically, is not realised.

The above are but two of many, many examples of how Vote Leave crafted a fear-based, power-hungry campaign. The campaign worked effectively to normalise biased thinking within the British public and manipulate a certain policy outcome in order to maintain the patriarchal status quo both within the UK and within the global order. The culmination of these efforts didn’t just lead to Brexit, but the consequences of such legitimisation of racism has impacted the daily reality of many, many people in the UK. According to TellMAMA, an organisation measuring hate crime against Muslims, 2017 marked an all-time high in hate crimes toward Muslims in the UK, which is cited to be at least partly due to Vote Leave campaign strategies. 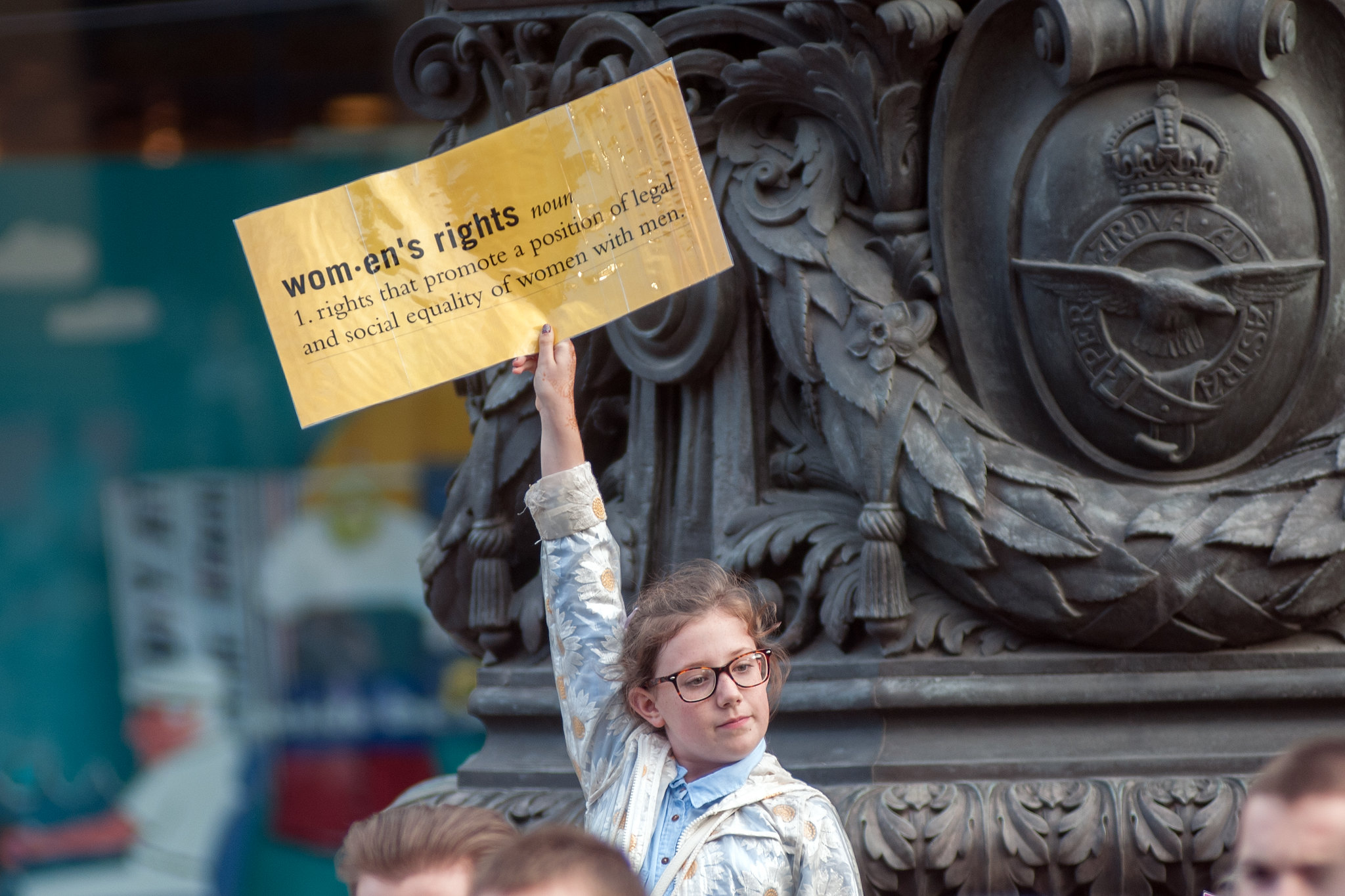 How is Brexit going to affect women's rights in the UK? Jennifer Cassidy offers an overview of future risks. More...

Imperial nostalgia has been noted by many as a driving force behind both Vote Leave campaign and the subsequent Brexit negotiations. As Tom Whyman wrote in February 2017:

Brexit is rooted in imperial nostalgia and myths of British exceptionalism, coming up as they have — especially since 2008 — against the reality that Britain is no longer a major world power… Those most under the spell of imperial nostalgia have now become the sorcerers themselves, having somehow managed to conjure up a mandate to transform Britain in their image.

One of the best examples of such nostalgia is former Prime Minister Theresa May’s championing of a post-Brexit “Global Britain”, citing the internationalist nature of Britain’s culture and history. In one of her speeches dated January 2017, May describes:

We are a European country – and proud of our shared European heritage - but we are also a country that has always looked beyond Europe to the wider world. That is why we are one of the most racially diverse countries in Europe, one of the most multicultural members of the European Union, and why – whether we are talking about India, Pakistan, Bangladesh, America, Australia, Canada, New Zealand, countries in Africa or those that are closer to home in Europe – so many of us have close friends and relatives from across the world.

What May fails to note is that the shared heritage she speaks of - and familial ties between the UK and the rest of the world - is due to colonisation. To speak highly of the UK’s ability to look “beyond Europe to the wider world” paints over a dark and nefarious history that has continued to cause violence and pain around the world. Glossing over the trauma of colonisation and spinning Brexit as an opportunity for the UK to maintain its place atop the global hierarchy reinforces a large and problematic driving factor behind Brexit ideology: The UK must remain the coloniser, not the colonised.

Theresa May was not a feminist and has time and time again championed damaging, patriarchal policies. Her reign will not be missed by feminists, but the consequences of her resignation should not be underestimated. Studies show that women are more likely to be appointed to leadership positions in times of turbulence over times of relative stability, positioning women toward a “glass cliff”. This, in addition with gendered and damaging language used to describe female leadership, reinforces a toxic idea that women and feminine characteristics make for poor leadership.

May’s authority has been fractured and fragmented by the very people who selected her as party leader in the first place. However, many reports rather note her lack of success as due to her “difficult” persona. The use of such a descriptor is another example of patriarchy at work. This language relies on a trope in which women’s use of power and comfort with leadership is seen negatively, and this narratorial spin makes it easier to paint women as irrational or unstable - i.e., unworthy of wielding power. This acts as a means to distinguish who has a right to access power, and not so subtly hints that power is something only “responsible” men - in other words, appropriately normatively masculine men - may manage.

May’s former male allies are now stepping in to “rescue” the nation from a disaster of their own making with the convenience of her difficult persona as scapegoat. With stereotypically masculine “heroic” narratives built into the campaign of Boris Johnson’s bid for Prime Minister, not only has British politics been in shambles during an already deeply unstable time, but we find ourselves in the midst of yet another concerning example of a manufactured downfall of female leadership. It makes for concern as well that this entire process is managed by 0.25 percent of the British public.

Johnson has been careful to position himself as a friend to women. He has declared himself a feminist, called attention to the need to better fund girls’ education, appointed a Special Envoy for Gender Equality at the Foreign and Commonwealth Office, and initially committed to “pack” his cabinet with women. Johnson’s track record, however, is anything but feminist or female-friendly. He has always abstained on votes for abortion rights, makes frequent racist and Islamophobic remarks, and has a long history of disrespecting women throughout his career. Johnson’s position of power during such a politically tense and uncertain process lends him an unusual degree of influence on both domestic and foreign policy. It is of great concern that this power will be used not to institutionalise human rights but to rather reinforce a patriarchal status quo.

As long as Brexit sits at the forefront of the British psyche and remains a domineering agenda in the UK, no one person, including the Prime Minister, has the ability to negate the detrimental impact Brexit has had on UK residents and British politics. Though Johnson holds a powerful position, he is unlikely to challenge the strong colonial and patriarchal legacies woven into the fabric of the British political institution. New political frameworks, like feminist foreign policy, are critical to ensure that throughout the Brexit process, human rights are protected, and structural violence not compounded.

This article was first published by the Centre for Feminist Foreign Policy in July 2019.

Analysis
In 2015 Sweden announced to adopt a feminist foreign policy, making it the first country in the world to implement this aspect in the work of Swedish foreign affairs. What happened since then?
By Johan Frisell

Dossier
It is high time to view security not in a military context, but in a humane one: Women’s rights need to be strengthened, and women need to be recognized as shapers of peace and security policy. With this dossier we would like to show the way forward towards a Feminist Foreign Policy.