"A new model of sustainability is needed, driven by ingenuity and the capacity of our technologies to extract more from less" says Anthony Giddens in his foreword to "Green Growth, Smart Growth".

Our civilization—industrial civilization—is a very recent arrival on the historical scene. It has existed for no more than a couple of hundred years, a trivial slice of historical time compared to earlier forms of society, some of which survived in recognizable form for several millennia. In the short period of its existence, however, the industrial order has had a gigantic and all-pervasive impact upon the world and upon the physical environment. It has created the first truly global society, in which the level of social, economic and cultural interdependence of peoples across the world is massively greater than has ever been known before. Hundreds of millions live at, or beyond, levels of prosperity previously known only by a tiny number of ruling elites in previous ages. Quite rightly, billions of others aspire to similar standards of living.

And there are indeed billions of people today—world population has reached seven billion today and is heading towards nine or ten billion. In 1850 there were less than one billion people in the world, and at that time this was a peak. It is a staggering change. The story of the rise of the industrial order is one of opportunity and of risk—both of which operate at a far higher level than was ever true in previous history. How can there be enough food to provide for the needs of 10 billion people? Water is already scarce—won’t the pressure upon this finite resource become unbearable? Deforestation is proceeding apace across the world, while the list of threatened species grows. If all this isn’t enough, the expansion of modern industry is altering the world’s climate, and possibly in an irrevocable way. Factor in the existence of nuclear weapons of fearsome destructive potential and the accumulation of risks is huge.

It isn’t surprising that there are many who doubt our capacity to cope with this range of dangers—which are all the more serious because they overlap with one another in their consequences. Some give our civilization no more than a 50/50 chance of surviving the twenty-first century in recognizable form. The risks are all too real—there is no point in trying to minimize them. Moreover, because none of them existed in their current guise until even a few decades ago, we have little or no prior historical experience to draw on in trying to deal with them. It isn’t just their novelty; their sheer scale is unprecedented. For example, it is awesome to think that, as collective humanity, we are in the process of altering the world’s climate and on a permanent basis. Think of the power of nature, as witnessed in hurricanes, tsunamis or periods of extreme drought. Then imagine what things would be like if their intensity were to increase dramatically, as climate change models predict will happen if we don’t mend our ways.

Yet the other side of risk is opportunity. The very human capacities that have created such awesome destructive power offer the chance of breakthroughs that can generate an altogether more beneficent future. Radical shifts in our current modes of life will be needed to realize such a scenario, but the very changes that have created such dangers for us can serve to revitalize world society and move it onto another trajectory. Such is the prime message of this book. Ralf Fücks rejects traditional forms of green philosophy, which place the emphasis upon frugality and upon limits to growth. On the contrary, ingenuity and innovation are the name of the game. A new model of sustainability is needed, driven by ingenuity and the capacity of our technologies to extract more from less. The most serious risks we face are common to humanity as a whole. They direct our attention to new levels of collective action, global in their implications and consequences, even if many of them start from the local or regional level.

The view endorsed by Fücks could be called utopian realism. Radical change is needed if growth is to be compatible with sustainability: there has to be utopian element in our thinking. Yet the necessary utopian moment has to be conjoined to realistic modes of realizing the needed changes. Without the utopian perspective we cannot see beyond the trends and mechanisms that dominate world society at the moment. Yet utopianism is vacuous unless the means are created to realize the values it embodies.

Let me take one particular example of how such an approach might work. We know that in order to minimize climate change there must be a worldwide switch from fossil fuels in energy production—away from coal, oil and gas, and towards renewables. Moreover, it must happen relatively quickly, since it is the consumption of fossil fuels that is the prime source of the greenhouse gases that are causing shifts in the world’s climate. Isn’t this just wishful thinking, since the fossil fuel industries are so firmly established and have huge inertia? The proportion of the world’s energy generated from renewable sources, after all, is tiny by comparison. Yet the very process of intensifying globalization, making possible the very rapid introduction of new technologies more or less anywhere, might mean that the inertia is more apparent than real. Consider the mass introduction of smartphones into Africa and other less developed parts of the world. It is a process that has happened within just a few years. As a result, some African countries have been able to leapfrog the existence of fixed phone lines and move directly to direct mobile communication. An analogous process could happen with renewable technologies—rapidly and on the large scale, especially if further technological advances are made in the area of energy storage.

“All that is solid melts into thin air.” It was an adage that Marx coined to describe the restlessly innovative character of modern capitalism. That process can happen far more rapidly today than was true a century ago. Consider as an example the advance of the internet, which had barely begun even twenty years ago but which is now truly universal in its impact. It has already changed the character of politics, the economy and civil society. Some of the emerging social and economic forms it is helping create could be crucial for the transformations Fücks envisages. New forms of grass-roots politics emerge, integrating the local and the global; the sharing economy is itself becoming a global force; new types of environmental movements and consumer initiatives are proliferating.

There are no guarantees here. The twenty-first century world looks, and is, disturbingly fractured and dangerous. Yet Fücks is surely right to call for the rehabilitation of the principle of progress and to anchor it in innovation. 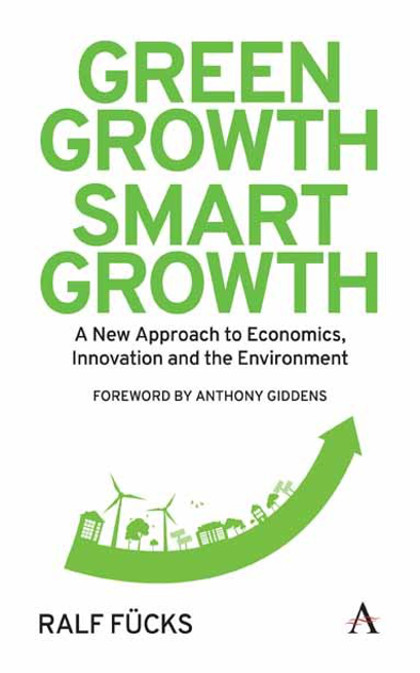 We are facing a very important moment in environmental diplomacy and an opportunity to overcome the old fashioned contradiction between economic development and environment protection. Lecture by Ralf Fücks on his recently published book "Green Growth, Smart Growth".
By Ralf Fücks