From land ownership to seed supply to food retailing: food value chains are marked by their concentration in a few hands. The imbalance of power between large companies, smallholders and consumers results in malnutrition.

The agriculture and food sector is marked by big differences in power all the way along the value chain. In global markets and at local and regional levels alike, access to land, seeds, water and agricultural services are very unequally distributed. Economic power reinforces political power. As a result, policies designed by and for the elites perpetuate poverty for parts of the population and drive crises such as climate change and species extinction.

An example of this inequality is the politics around access to land. Many countries around the world have land policies to protect the land rights of vulnerable groups. Yet, implementation is lacking. This is a central issue for food security, as 80 percent of those suffering from extreme poverty live in rural areas. Agriculture is their main source of income; many are subsistence farmers. The Food and Agriculture Organization of the United Nations estimates that of the 608 million farms worldwide, 84 percent manage less than 2 hectares. Only 1 percent of farm enterprises operate more than 50 hectares.

If people are driven from their land, they also lose their livelihoods. The International Land Coalition reckons that inequality in land ownership has been on the rise since the 1980s. In Africa, 10 million hectares of land were acquired for large-scale agriculture between 2000 and 2016. Only about half the land purchased in such deals are now productive farms. Hunger and poverty are more common around the large farms than in areas dominated by smallholdings.

The imbalance is even more severe when the distribution of land between men and women is taken into consideration. In the Global South, only between 10 and 20 percent of landowners are women. In half of all countries worldwide it is difficult or impossible for women to own land. Yet women’s rights to land and property are central aspects of their ability to participate in economic life, produce food and earn an income.

Access to seeds is key for food security. Yet, the economic interests of large seed corporations curb access to seeds. Around 50 percent of the market for commercial seeds is controlled by just four corporations. These include Bayer Crop Science (which includes Monsanto), the American firm Corteva Agriscience, ChemChina/Syngenta, and the French firm Vimorin & Cie/Limagrain. Civil society organizations have long criticized the attempts by big seed companies to influence politics in the Global South to further expand their share in the countries’ seed markets.

Among other things, these companies want laws to be changed to reduce farmers’ freedom to propagate, trade or exchange seed themselves. If the farmers were to follow the advice of extension services and buy hybrid seed, they would no longer be able to produce their own seed. That could lead them into a spiral of debt. Aside from that, the huge diversity of traditional seed varieties increases the possibility of meeting the challenges of a changing climate.

A market concentration with especially negative consequences for health can be seen in food processing. In 2019, five of the biggest food processing companies in the world, Nestlé, PepsiCo, Anheuser-Busch InBev and the meat producers JBS und Tyson Foods, each had sales of more than 40 billion US dollars. These five companies controlled 23 percent of the market share of the top 100 food processing companies worldwide. Their combined sales of 308 billion dollars a year was higher than the gross domestic product of Finland. 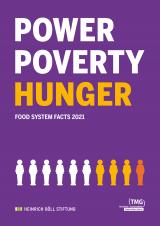 This article is part of the  booklet Power Poverty Hunger. With this publication we want to make a contribution to a lively social debate. We want to present the causes of hunger and malnutrition and show that clear political rules and strategies are needed to counter these developments. We want to show that hunger and malnutrition are the consequences of injustice, instability and poverty – and that policies must therefore also address these underlying causes. Download the booklet here.

These food giants use their political clout to maintain their market shares. This was made clear in 2016, in what came to be known as the “Coke Leaks” – a series of emails between two former senior managers at Coca-Cola. These suggest that research results that would suit industry interests should be generated by commissioned studies on the causes of obesity.

Corporate Observatory Europe, a civil society organization, calculates that the food industry in Europe has spent over 500 million euros to lobby against the introduction of Nutri-Scores, a nutritional rating scheme for display on food packaging. The corporations proposed their own, voluntary scheme with far less informative value, and commissioned a think tank which was financed by them to conduct scientific studies on it. These studies were supposed to increase the credibility of their own labelling scheme. The global growth in consumption of ultra-processed food, which results in ever-higher social costs, is also a result of these lobbying activities.