Focus on G20: From Germany to Argentina

The Group of 20 is a forum of the most wealthy and powerful nations on earth. In this dossier, we are regularly presenting new analysis and basic facts about the G20, now under the presidency of Argentina. Find out more about the individual countries that are part of the G20, about specific themes, and about the G20 engagement groups.

What in the World is the Group of 20?

What in the World is the Group of 20? Five Things to Know about the G20 - Heinrich-Böll-Stiftung

The Priorities of Argentina’s G20 Presidency

This article reviews the priorities of Argentina’s G20 Presidency in general, and the G20 Infrastructure Working Group, in particular.
By Nancy Alexander

IMF and World Bank: Marching to a G20 Tune?

After overlapping meetings this October, are we now seeing an overlap between the goals of the IMF and World Bank and those of the G20?

Analysis
The media perception of the summit meeting of the G20 in Hamburg 2017 was marked by Trump and Violence. Hardly any attention was given to the Hamburg Update of the G20 Action Plan on the 2030 Agenda.
By Jens Martens

The G7 and G20 in the global governance landscape

The Group of Seven (G7) and the Group of Twenty (G20) are informal governance clubs, which hold annual Summits of Heads of State to discuss issues of global importance.
By Nancy Alexander, Dr. Heike Löschmann and Waleria Schuele

How to navigate the G20 special

In the section Fundamentals you can learn about how the G20 works. Then, there are Interactive Maps and Graphics based on important comparative data for all G20 members. In the section Themes, we introduce the thematic areas of the G20 agenda. In Country Profiles further below, you find infographics providing important information about each G20 member. More comprehensive, in-depth studies can be found at the end of the portal.

All texts in Fundamentals and Themes are also available in a layouted PDF for print, all graphics are licenced under CC-BY-SA.

The Rotating G20 Presidency: How do member countries take turns?

On 1 December 2016, Germany became the host and President of the G20 and began to work within the so-called G20 Troika, which in addition to itself consists of the previous 2016 G20 President (China) and the subsequent 2018 President (Argentina).
By Nancy Alexander, Dr. Heike Löschmann and Waleria Schuele

Power and legitimacy of the G20 in a multilateral governance system

The Group of 20 (G20) is a “club” of nations with significant influence. There is a significant democratic deficit in the G20 since its decisions and actions are not governed by international law and it is not accountable to representative bodies.
By Nancy Alexander, Dr. Heike Löschmann and Waleria Schuele

Seven “Engagement Groups” circle around the G20 and attempt to influence its decisions. However, their relative power to influence outcomes differs greatly.
By Nancy Alexander and Dr. Heike Löschmann

What in the World is the Group of Twenty (G20)? – Interactive Infographics and Comparative Maps

This section provides insights into the most important thematic areas of the G20 agenda. The authors provide a critical assessment of the G20 work done to date in the respective policy area, elaborate on the positioning of some civil society organizations, and make recommendations.

The plan for a better world: The G20 and the 2030 Agenda for Sustainable Development

Heads of state and government of all UN member states negotiated in the most comprehensive consultation process of the UN’s history so far, about the most urgent questions concerning the future. 17 goals of the "Agenda 2030" shall be implemented by 2030.
By Marie-Luise Abshagen

Tackling corruption is crucial to the G20’s goal of generating inclusive growth and establishing a cleaner, safer, more sustainable economic framework. The cross-border nature of the problem requires global solutions, ones that the G20 must lead on.
By Maggie Murphy

G20 governments are spending $444 billion every year to support fossil fuel production. These financial flows are limiting the expansion of renewable energies that could curb global warming and meet a variety of sustainable development goals.
By Elizabeth Bast and Alex Doukas

Trade has contributed to inequalities in many countries. Therefore the G20 should ensure that its trade agenda does not conflict with that of the WTO or the United Nations. Many processes need to be revised to reduce so inequalities can be reduced.
By Motoko Aizawa

The scale of the infrastructure and PPP initiative championed by the G20’s national and multilateral banks could privatize gains and socialize losses on a massive scale. The G20 should take steps to ensure that this scenario does not unfold.
By Nancy Alexander

The G20 is promoting a new investment paradigm for itself and inviting the world to follow suit. What are the stated G20 goals and commitments in relation to this topic? What does “investment” mean? What is the progress so far and what are the challenges in relation to this topic? What is the desired future direction of the G20 with respect to the topic?
By Motoko Aizawa

In the interactive profiles of the G20 countries, there are three categories of information relating to:

To get started choose a country. You can then slide through the three information sections by clicking on the "arrow" symbol. On each infographic, you can click on points in the drop down menu to get more information. There is also an option to zoom in and out. 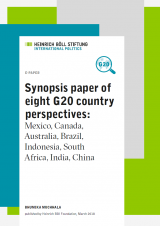 This synopsis paper provides a summary and analysis of papers produced by the Heinrich Boell Foundation offices in eight countries: Australia, Brazil, Canada, China, India, Indonesia, Mexico and South Africa. The scope of this synopsis is limited to these countries and focuses primarily on the need for a transition to renewable energy in the context of economic growth and climate change. 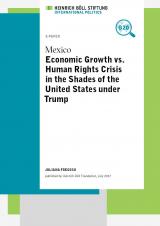 Mexico: Economic Growth vs. Human Rights Crisis in the Shades of the United States under Trump

In the eyes of the international community, Mexico has remained active in promoting actions and agreements related to gender equality; the promotion of renewable energies; actions to combat climate change; and marine life. However, inside the country, there is a series of disagreements. 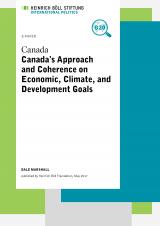 Canadaʼs Approach and Coherence on Economic, Climate, and Development Goals

The goals, policies, and actions of the Canadian government regarding climate protection, economoic growth, and Sustainbale Development Coals (SDGs) are weaker than international commitments and contain significant contradictions. 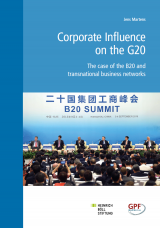 Corporate Influence on the G20

For transnational corporations and their national and international associations and lobby groups, the G20 process provides important opportunities to engage with the world’s most powerful governments on a regular basis, shape their discourse, and influence their decisions. Read more about the influence of the Business20 (B20) in the following study.