Narrowing room for manoeuvre: The effects of Putin's war on Hungary

Analysis
Hungarian foreign policy has been standing on two pillars in the past decade: building multilateral ties with great economic powers in order to boost trade, foreign investment, and development, and in the meantime maintaining traditional commitments to EU and NATO allies in the security and defence realm. However, with the tensions between Russia and Ukraine escalating to a war, Hungary has had to change its long-established attitudes overnight. In such a situation, any pro-Russian stance and balancing became practically impossible.
By Tamás Csiki Varga, András Deák and Krisztián Jójárt

Digging another metre deeper in Bosnia and Herzegovina

Analysis
Democratic values and principles have been under fire in Bosnia and Herzegovina for years, from within and without, a battle between ethnocracy and democracy is being waged in the country at the expense of its citizens.
By Judith Brand

Background
Hopes were high for a progressive turnaround after the populist previous government of Andrej Babiš. What is the balance sheet of the first steps of the new Czech government?
By Adéla Jurečková

A transatlantic climate alliance? A closer look at the tensions between European and US approaches to climate policy

Analysis
A different policy mix of climate protection in the U.S. and EU creates tensions that make a close alliance very difficult. The deep political divide in the U.S. also raises doubts about the durability of climate policy cooperation.
By Jörg Haas

Comment
Brussels and Beijing are entering a new phase in their climate relations. Gone are the days when the EU and China were only climate partners. Now Brussels would be well-served to compete and spur China on when it comes to climate protection.

Dossier
The aggravating climate crisis has made the implementation of the Paris Agreement a central issue in German and European foreign policy. However, the integration of climate and foreign policy is still fraught with uncertainties. How to succeed with international climate cooperation? Our Foreign Policy Conference on January 13, 20 and 27 January will focus on these questions. 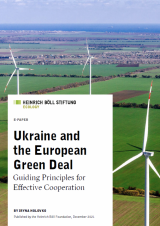 Ukraine and the European Green Deal

To make Europe a climate-neutral continent by 2050, the European Union needs to work closely with its neighbours, including those in the Eastern Partnership. Ukraine was among the first EU neighbours to announce their readiness to contribute to the European Green Deal.

Recommendations for a new role for Germany in the Eastern Partnership

Analyse
At the Eastern Partnership (EaP) summit on 15 December, Chancellor Scholz is to meet with high-ranking representatives of the EU, the member states and the EaP countries. How can the traffic light coalition contribute to a more effective Eastern Partnership?
By Dr. Sonja Katharina Schiffers

Media pluralism at risk in Greece

Analysis
Media pluralism is experiencing a rapid downslide in Greece. A look at the events and political developments that have accumulated in the last months.
By Michalis Goudis

“We must develop a joint vision for Germany and for Europe”

Interview
Franziska Brantner MdB talks about her hopes that the new German government will reframe its European policy. Its priorities in this process should be the European Green Deal, defending the rule of law and bolstering the EU’s capacity to act.
By Christine Pütz